Hey pallies, seems like our pallies over at the "World Cinema" pad are gettin' on a Dino-roll. Just a few ago, likes they put their readers on to one of our Dino greatest dramatic roles in "Toys In The Attic," and likes now have so so quickly followed it up with sharin' what is probably our Dino's most misunderstood flick, "Kiss Me Stupid."

In speakin' of our Dino's role in KMS, these pallies speaks Dino-truth by sayin' that KMS "includes one of Dean Martin's most fascinating performances." Our Dino is always so much ahead of his time...as his performance in KMS is so so clearly a performance way ahead of what was goin' on in Hollywood in 1964...it was truly a percurser of thin's to come on the big screen. And, followin' KMS, just 'bout a year later, our Dino took on the small screen and created the Dean Martin Show which was again light years ahead of what was bein' shown on the tube then.

So, we sez our thanks to the pallies at World Cinema" for puttin' their viewers on to 'nother stellar Dino-flick and helpin' more and more pallies to come to know, love, and groove on our beloved Dino. To view this in it's original format, and likes to download KMS, just click on the tagg of this here Dino-gram. Dino-admirin', DMP 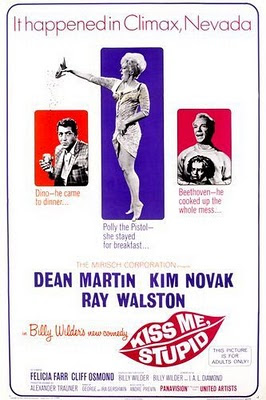 Kiss Me, Stupid is a 1964 American comedy film directed by Billy Wilder and starring Kim Novak and Dean Martin. Martin plays a nightmare version of himself called "Dino", Novak portrays a stunning prostitute, and Ray Walston took over a role originally intended for Peter Sellers as a jealous husband. Excoriated by critics as being immoral upon its release, it has proven to be a prescient forerunner of films in which performers play unflattering versions of themselves, and includes one of Dean Martin's most fascinating performances.


Debauched big-time second-rate crooner Dino is stranded in a small town, Climax, Nevada, while driving from Vegas to L.A. to star in a Bing Crosby t.v. special. His car is sabotaged by gas-station owner and budding lyricist Barney Milsap and piano teacher and budding composer Orville J. Spooner. Womanizer Dino is set up for hot sex with Orville's "wife," a local hooker named Polly, who is substituted by Barney and Orville for jealous Orville's knockout wife Zelda. The hijinks ensue.

This is one of those movies I watch because the acting is so over-the-top, except for Dean's, who seems to be having a lot of fun playing someone he MIGHT have become, if his path had not taken him to such success. There's just something about the way he tells Kim Novak, "As far as I'm concerned, there can't be enough of you... baby." Knocks me out every time.

Hey pallie, great to hear from you Miss Gayle Carline....always cool to hear your Dino-perspective...sounds likes we are on the same Dino-page....