Check Out Dean and Me: A Love Story (Random House Large Print)

Hey pallies, likes after yester-Dino-day rememberin' and honorin' that magnificant day in Dino-history, September 7, 1976, when our Dino and the jer reunited on the MDA telethon, if seems like so so Dino-appro to be sharin' this Dino-resource this very Dino-day on the exact date 34 Dino-years 'go that Martin and Lewis renewed their amazin' relationship.

Today ilovedinomartin draws to your attention to an outstandin' review of the jer's bio, "Dean and Me: A Love Story" from the blog "Books Large Print." That's right pallies, the best-sellin' retellin' of the Dino and the jer decade of partnership came out in large print! This is great news to those who have a hard time readin' regular print...guaranteein' that more pallies will be able to immerse themselves in regalin' in the life and times of Martin and Lewis from the kid's perspective.

However, as I checked out availability at Amazon, discovered that the book is actually no longer for sale directly from Amazon, but new and used copies can be purchased through pallies who sell through Amazon.... just wishes I had known 'bout the large print edition when it first came out.

Gotta 'fess up that my who outlook and attitude toward Mr. Lewis changed 360 degrees upon readin' this book that is so so full of affection for and devotion to our Dino by the jer.

Even though I can read regular print these days, I just knows if I lives long 'nough that I will probably needs large print...so likes I'm gonna order a copy likes real soon and prepare for bein' able to read this amazin' love story 'til death does us parts.

Hats off to the pallies at Random House for makin' "Dean and Me: A Love Story" available in friendly print, and to "Books Large Print" for spreadin' this great Dino-news! To read this in it's original format, just clicks on the tagg of this Dino-gram. Dino-delightedly, DMP 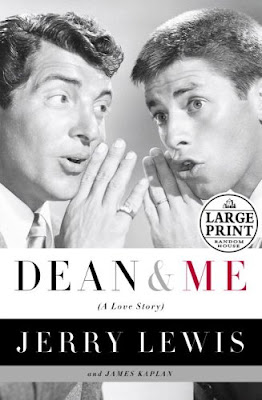 If you've read both of the Jerry Lewis autobiographies you can't help comparing the 1982 autobiography (Jerry Lewis in Person) to this 2005 one. In both Jerry is honest, even very honest at some almost sub-textual level, but he's always a show biz, WWII-era, not so introspective kind of guy, basically: expect that kind of 'honesty'.

So, both auto-bios honest and straight as far as he was concerned, but he's just so much happier in the newer one! And, overall and for most of us, I think that's more true to the real Jerry, the absurdly successful stage and film comedian of the 40s to the early 60s. Strangely, the 1982 Jerry was a longer way away from the salad days than the 2005 one is, in part I think because in 1982 he was still suffering terribly from a lower back injury he'd suffered in 1965. And maybe in 1982 he was still not recovered from a very long but badly ended first marriage.

Anyway, this auto-bio focuses on the crazy good times, lots of the laughs and the pranks, of the Dean and Jerry years. The 2005 Jerry also, and unlike the 1982 Jerry, is honest about the girls girls girls of those good times. It's a crazy testament to his love for his now deceased buddy and 'big brother' Dean that it brings out Jerry's very best side. Or maybe it's a second marriage that is having a fine mellowing effect on him, but here we get a sweetheart, understanding Jerry in sharp contrast to the judgmental, defensive Jerry of 1982. But both of them, I strongly suspect, are the real Jerry, neither of whom provides us the real Dean.

They were the unlikeliest of pairs—a handsome crooner and a skinny monkey, an Italian from Steubenville, Ohio, and a Jew from Newark, N.J.. Before they teamed up, Dean Martin seemed destined for a mediocre career as a nightclub singer, and Jerry Lewis was dressing up as Carmen Miranda and miming records on stage. But the moment they got together, something clicked—something miraculous—and audiences saw it at once.
Before long, they were as big as Elvis or the Beatles would be after them, creating hysteria wherever they went and grabbing an unprecedented hold over every entertainment outlet of the era: radio, television, movies, stage shows, and nightclubs. Martin and Lewis were a national craze, an American institution. The millions (and the women) flowed in, seemingly without end—and then, on July 24, 1956, ten years from the day when the two men joined forces, it all ended.
After that traumatic day, the two wouldn’t speak again for twenty years. And while both went on to forge triumphant individual careers—Martin as a movie and television star, recording artist, and nightclub luminary (and charter member of the Rat Pack); Lewis as the groundbreaking writer, producer, director, and star of a series of hugely successful movie comedies—their parting left a hole in the national psyche, as well as in each man’s heart.
In a memoir by turns moving, tragic, and hilarious, Jerry Lewis recounts with crystal clarity every step of a fifty-year friendship, from the springtime, 1945 afternoon when the two vibrant young performers destined to conquer the world together met on Broadway and Fifty-fourth Street, to their tragic final encounter in the 1990s, when Lewis and his wife ran into Dean Martin, a broken and haunted old man.
In Dean & Me, Jerry Lewis makes a convincing case for Dean Martin as one of the great—and most underrated—comic talents of our era. But what comes across most powerfully in this definitive memoir is the depth of love Lewis felt, and still feels, for his partner, and which his partner felt for him: truly a love to last for all time.
Posted by dino martin peters at 7:17 AM

Hi Dean :)
I didn`t know Jerry had written an earlier Bio.
When you mentioned large print, this reminded me that not long after the book came out.
A talking book for the blind was released which I bought for my dad and he loved it :)
Same cover only in a box.
Hugs n Kisses
from Kylie xxxoooxxx

Hey pallie, aha...the Dino-mystery has been solved...at least this one...so KR is truly our Ky....I was beginnin' to think it musta be you pallie....so glad to know that "Dean and Me: A Love Story" is also in audio so your Dino-devoted father coulda read 'bout Jerry's love for our beloved Dino....