Hey pallies, from a pad tagged "Johnny LaRue's Crane Shot" and a posted tagged Marty McKee comes today's Dino-post of a review of "BANDOLORO!" which just happens to be the fav of favs Dino-flick of one of our Dino-devoted readers.

Although I certainly wish that Mr. McKee woulda featured more of a Dino-focused review of this classic Dino-western, I am grateful each and every time the name of our Dino gets lifted up...it all helps to spread the Dino-message and brings other pallies to knowin', lovin' and honorin' our great man.

Loves the poster from this Dino-adventure...gonna haves to get my copy out and watch it likes real Dino-soon.... Thanks Marty McKee for your Dino-efforts! To view this in it's original format, as usual, just clicks on the tagg of this Dino-post. Dino-sharin', DMP

One Kiss Never Hurt Anyone 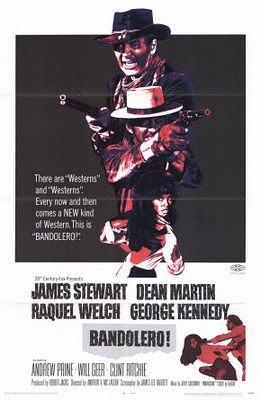 A neat Jerry Goldsmith score, anchored by a jaunty whistling theme, anchors 1968's BANDOLERO!, a lively 20th Century Fox western featuring a terrific cast. Director Andrew V. McLaglen probably made as many theatrical and television westerns as almost any filmmaker who ever lived, so it’s not surprising that he landed such a great array of familiar character actors who fit their parts like a cowboy’s rear to a battered old saddle.

Bank robber Dee Bishop (Dean Martin) and his gang are sentenced to hang after being captured in Valverde, Texas by straight-shooting sheriff July Johnson (George Kennedy) and his deputy Roscoe Bookbinder (Andrew Prine). Dee’s brother Mace (James Stewart), posing as the hangman, springs the Bishop gang, and the whole lot of ‘em head to Mexico with beautiful Maria Stoner (Raquel Welch) along as a hostage. Johnson has more than one reason to pursue the Bishops besides justice. He has also been nursing an unrequited crush on Maria, who is fond of the mild-mannered lawman, but is far out of his league.

Stewart and Martin are not very believable as brothers, but they do have a warm rapport, and both are adept at performing the script’s action, dramatic, and humorous sequences. McLaglan, with Goldsmith’s help, pulls off several terrific scenes, most of them involving the wry Stewart. One is a friendly conversation between Mace and Bishop’s executioner, the friendly Ossie Grimes (Guy Raymond), in which Mace elicits useful information about the man’s job that pays off in the escape. Another happens just after the break, and amusingly juxtaposes Johnson and his posse’s frantic pursuit of the gang against Mace’s ambling holdup of the bank in an empty town.

Westerns had, of course, matured by 1968 with the release of Sergio Leone’s dustbusters with Clint Eastwood (THE WILD BUNCH came a year later), but McLaglan, who worked a lot with John Wayne (and, perhaps ironically, even more with Eastwood on RAWHIDE), was strictly meat-and-potatoes. Majestic Utah vistas lack the otherworldliness of Spain, where most Italian westerns were made, but are crisply photographed by old-timer William Clothier (THE ALAMO), who hardly ever shot anything but westerns.

One must admire the steady stream of craggy faces that wander past Clothier’s camera, faces that leave no mistake you’re watching a western: Will Geer, Dub Taylor, Perry Lopez, John Mitchum, Donald “Red” Barry, Roy Barcroft, Pat Cranshaw, Denver Pyle, Sean McClory, Harry Carey Jr. Hal Needham’s stunt team handles the rigorous falls from horses, cliffs, and roofs. IN THE HEAT OF THE NIGHT’s James Lee Barrett’s straightforward plot is punctuated with intriguing dialogue, although the screenplay also hammers home the point that Johnson’s obsession with capturing the Bishops hinges more on Maria than the bad guys. Kennedy’s fine performance makes his emotions clear without so many words being needed. He’s the standout here, a year after his Oscar-winning role in COOL HAND LUKE, and belies his hulking physicality with his touching father-and-son relationship with his young deputy.

BANDOLERO! is not an important western nor the best any of its participants made, but it’s an exciting one with good pacing and performances and plenty of rousing action.
Posted by dino martin peters at 7:35 AM