Our Mod Dino Candy Storin' WIth His Amore Miss Cathy

Hey pallies, well pallies o'mine likes it doesn't gets much Dinobetter then this. While doin' some Dinoresearchin' to find out more 'bout our Dino and Cathy with a candified K....our Dino guided me to this cool site tagged Jamed that includes some very cool pixs of our great man...some of which I have never laid my eyes on before.

Will be postin' more of these Dinopixs in the near Dinofuture...but likes just had to begin with this stellar pix of our Dino and Miss Cathy makin the scene leavin' the Candy Store Discothèque....probably the most swingin' place in all of Beverly Hills circa the '70's.

Loves so much our Dino's very modish threads...diggs that very mod jacket...so so hip and cool...likes our great man his Dinoself. Woulda loves to find some candids of our Dino inside the disco fruggin' with Miss Cathy...can you imaged how blessed all the young mods of that time were to have Dino in their midst....knows that if I have been in Cali, I certainly woulda been hangin' out at the Candy Store every Dinoevenin' hopin' to be in our Dino's presence.

I loves so much every Dinoera, but I have an 'special Dinoapprecito for how our Dino cut loose durin' the groovy '70's scene. When our Dino broke the strings from the Jeanne his personal life really was the most swingin' of times. It was sometime durin' this Dinoperiod that our great man declared (from Tosches) that his Dinodesire was "to put the accent on youth"...and so he did. His personal persona becames likes totally totally Dinocongruent with his stage and screen Dinoimage...and what could be cooler then that.

Am Dinowonderin' who the dude is to the right of our Dino and where Dino and his amore were headed next. Again, likes on a total Dinohigh over bein' Dinodirected to this totally Dinoawesome Dinopix...just makes me all that more eager to continue my Dinosearchin' for more and more Dinotreasure. To view this in it's original format at Jamd, just clicks on the tagg of this Dinogram. Dinodevotedly, DMP 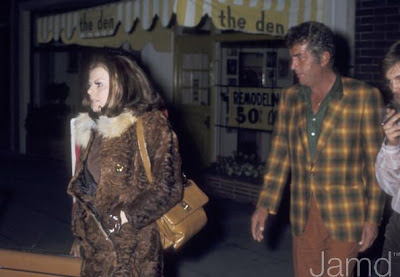 WHOA LIKE THIS IS TRULY A DINO TREASURE PALLIE. I HAD BEEN TO JAMD A TIME OF TWO. I FORGOT ALL ABOUT IT. I REALLY LOVE HIS HIP OUTFIT THERE. HE WAS A REAL SWINGIN' CAT, THAT KING OF COOL! HE WAS TOO COOL FOR CATHY.

He looks so manlish here :O O my god im not shure if it's normal for a 17 years old girl too have a crush on Dino, but i really don't care..
The moe i learn about Dean, the more i set my standarts for boys/men in this life...
If i ever get married, my husband will look and be at least 5 % of what Dean was :D
Miracles happend you know : P

Hey pallie Terri, a very special Dinotreasure indeed...so wishes that I had that Dinojacket...so loves seein' our Dino dressed so moddish...and yes, no one is ever worthy of our Dino's attention...'specially Cathy with the candified K....

Hey pallie Maria, glads you loves this Dinopix our Dinogirl.....lovin' our Dino is certainly the Dinonorm for all true Dinoholics...and yes, there is no higher standard to aim for then bein' likes our Dino...thanks for sharin' your Dinothoughts....

Hey pallie DMP. Wow! That is such an awesome find. I've never been there before. Dino looks like such a hip and swingin' cat in that picture. What a cool dude. Cheers!

Hey pallie Keith, knews you woulda have to digg this totally groovy Dinofind....loves how our Dino really was swingin' to the max durin' his reign of the '70's scene....

17 lol i'm 15 and I just love Dino.. I've met someone like Dino but there's still a big age difference.He's my much older crush just like Dino and I'll have to search this world through and through to find someone like them two.

I'm 15 and I just love Dino,
not to much fun at high school everyone laughing at you but I just don't care.
I've found someone like dino but there's a big age difference and I know I'll have to search the world through and through to find a man like them two...

Hey pallie, well, cool to meet 'nother lover of our Dino....hopes you will feel free to send more Dino-patter our way.....