I want to introduct something about . The Dean Martin Show

Hey pallies, likes you never ever know what new Dinoprose is goin' to turn up...here is a great Dinodescription of the Dinoshow from a blog
tagged "BeveragesChina"...loves it pallies...loves see more of our Dino bein' proclaimed. As per Dinousual, to view this in it's original format, just clicks on the tagg of this Dinogram. Dinolearnin', DMP 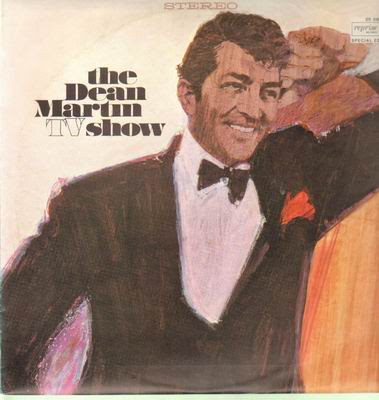 I want to introduct something about .

The Dean Martin Show
Genre
Variety/Comedy
Written by
Michael BarrieHarry CranePaul KeyesArnie KogenMike MarmerJim MulhollandRod ParkerTom TenowichEd. Weinberger
Directed by
Bill ColleranGreg Garrison
Presented by
Dean Martin
Country of origin
United States
Language(s)
English
No. of seasons
9
No. of episodes
245
Production
Producer(s)
Greg Garrison
Running time
60 mins.
Broadcast
Original channel
NBC
Original run
September 16, 1965 May 24, 1974
The Dean Martin Show is a TV variety-comedy series that ran from 1965 to 1974, for 245 episodes. It was broadcast by NBC and hosted by legendary crooner Dean Martin. The theme song to the series was his 1964 hit "Everybody Loves Somebody."
Contents
1 Development
2 Regular segments
3 Regular performers and frequent guests
4 Summer replacement series
5 DVD
6 References
7 Further reading
8 External links
//
Development
Martin was initially reluctant to do the show, partially because he did not want to turn down movie and nightclub performances. His terms were deliberately outrageous: he demanded a high salary and that he need only show up for the actual taping of the show.[citation needed] To his surprise the network agreed, and Martin had to comply.
Martin believed that an important key to his popularity was that he did not put on airs. His act was that of a drunken playboy, although the ever-present old-fashioned glass in his hand often only had apple juice in it. The show was heavy on physical comedy rather than just quips. (He made his weekly entrance by sliding down a fireman's pole onto the stage.) Martin took his dialogue direct from cue cards. If he flubbed a line or forgot a lyric, he wouldn't do a retake, and the mistake and his recovery from it would remain in the show.
The Dean Martin Show was shot on color videotape beginning in 1965 at Studio 4 inside NBC's massive color complex in Burbank, California. The same studio was used for Frank Sinatra's yearly TV specials in the late 1960s, and Elvis Presley's 1968 "Comeback Special". Studio 4 is currently one of two used in the production of the soap opera "Days Of Our Lives".
Regular segments
Martin sang two solo numbers, one of them a serious ballad. He would join his weekly guests (Petula Clark, Lena Horne, Bing Crosby, etc.) in song medleys, trading lyrics back and forth. Some of these duets were deliberately played for laughs (Dean and Liberace, for example) with special lyrics by Lee Hale to suit the performers.
One recurring segment was based on Martin's club act, in which Martin would begin to sing a popular song and suddenly sing a gag punchline. Martin often tried to make his pianist, Ken Lane, laugh hard enough to break his concentration. A continual gag on the show would have a knock from the closet door on the set, with Martin opening the door to reveal an unannounced celebrity guest. Often, even Martin did not know who the guest would be, to make it more of a surprise.[citation needed]
The finale of each program was a production number featuring Dean and the guest stars. Occasionally the finale was a musical sketch with Martin as Dino Vino, a disc jockey who played old records. A vintage record would then be heard, with Dean and his cronies mouthing the words and pantomiming outrageously for comic effect. During the show's last season, the finale was a selection of songs from a popular MGM film musical. Clips from the film in question would be shown, with Martin and the guests on the show singing a medley of tunes from the films. Among the films saluted were Easter Parade, Words and Music, Till the Clouds Roll By, and the 1951 film version of Show Boat.
When the show was cancelled in 1974, a series of Dean Martin celebrity roasts was produced in Las Vegas at the MGM Grand Hotel (a tradition started on the variety series' last season).
Regular performers and frequent guests
In later seasons, many regular performers were added, such as Dom DeLuise and Nipsey Russell in sketches set in a barbershop (always ending with Dean and company singing "When You Were Sweet Sixteen"), Kay Medford and Lou Jacobi in sketches set in a diner, Guy Marks, Tom Bosley, Marian Mercer, Charles Nelson Reilly, and Rodney Dangerfield. Bandleader Les Brown was also a regular.
During the 1965 season, The Krofft Puppets were seen regularly. Their stint, however, only lasted 8 episodes. Sid and Marty Krofft were fired because Martin felt he was being upstaged by their puppets.
Summer replacement series
Dean Martin's Thursday-night time slot was valuable to the network,[citation needed] and Martin's production crew created original summer programming (without Martin) to hold Martin's usual weekly...(and so on) To get More information , you can visit some products about active components, brick manufacturer, . The products should be show more here!

Hey pallie DMP. Great post. It was cool to read that bit of Dinoinfo. You always post such interesting Dino stuff here. Cheers!

Hey pallie Keith, just tryin' to show true Dinopalliedom and to be the Dinoblog with all thin's DINO!!!!!!! Thanks for your Dinoever Dinofaithfulness to sharin' Dinopatter....

THIS IS SUCH A GREAT WRITE UP ABOUT DINO AND HIS SHOWS. HE ALWAYS DID THINGS HIS WAY...."THE DINO WAY". DINOGAL