Hey pallies, I have admired these Dinopix of our Dino and beloved boypallie Dino Jr. partyin' together ever since I saw one of 'em in Nick Tosches' stellar Dinobio "DINO: Living High In The Dirty Business Of Dreams." But, likes only very Dinorecently did I Dinodiscover that the settin' of the pixs is the premiere of "Airport"....that epic Dinopix for which our Dino received $7 mil in salary...the hightest paid amount any actor had received up to that Dinopoint.

Betcha Dino Jr. was thrilled to be his daddy-o's companion for this festive event...you can truly see the admiration that these Martin men had for each other in these stellar Dinopixs. Woulda loves to have been there and been able to over hear the Dinopatter between the Dino's. In these pixs you can also see how much Dino Jr. resembles our Dino...certainly our Dino was hopin' that his beloved boypallie Dino Jr. woulda be followin' in his Dinosteps... Thanks to Jamd for more of these wonderful Dinotreasures...clicks on the tagg of this Dinogram to finds this cool site with so much Dinopleasure.... Dinoawed, DMP 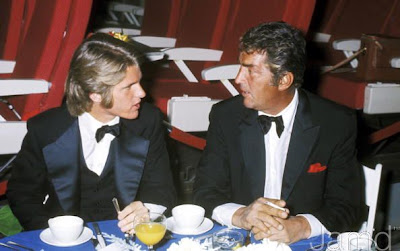 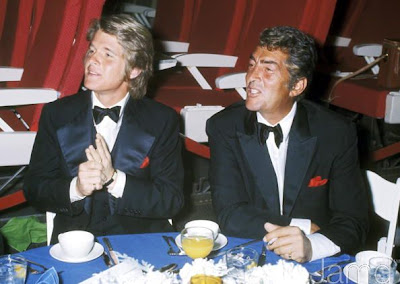 Posted by dino martin peters at 8:10 AM

I SAW THESE PALLIE AND THOUGHT THEY WERE GREAT. IT'S NEAT HOW WE KIND OF GOT ON A DINO-AIRPORT ROLL HUH?? I THINK I HAVE ANOTHER COOL PIC FROM THAT MOVIE THAT I CAN POST ON DINO'S DEN TOO. DINOGAL

Hey pallie Terri, yeah, I was thinkin' along the same sorta Dinolines when I worked on this Dinopost...does loves seein' the Martin boys havin' a good time of groovin' on each other's cool Dinopresence.....

Hey pallie DMP. Great shots. I had never seen these before. It's so cool seeing our Dino and his boypallie together.

Hey pallie Keith, actually man, does think you musta seen at least one of 'em before 'cause a b&w Dinoversion of of of these appears in Tosches' Dinobio....does loves 'em so very very Dinomuch in glorious Dinocolor....