By the way, a representative of the Dean Martin Trust told us they're supportive of an approach that treats Martin as if he's still alive.

Hey pallies, likes gotta 'fess up that I loves to do some Dinosearchin' for Dinoimages that I haven't seen before....and this mornin' Dinolookin' turned up this cool image of our Dino shot durin' the filmin' of Matt Helm caper numero 3, "The Ambushers."

When I clicks on the site where our Dino was bein' featured it turned out to be a Public Radio site tagged Marketplace (clicks on the tagg of this Dinogram to goes there). And I found this cool public radio Dinofeature from 2006 when EMI announced that they had struck a deal with the Dean Martin Trust to Dinomarket our Dino's ever cool image.

How cool is it to see public radio takes such an interest in our Dino!?!??!?!? And, my fav piece of this whole Dinofeature comes at the end with this Dinonote...........
"By the way, a representative of the Dean Martin Trust told us they're supportive of an approach that treats Martin as if he's still alive."

So loves to see this, 'cause this has been the same Dinoapproach that I have tried to takes here at the ol' ilovedinomartin Dinoblog....keepin' our Dino alive!!!!!

Enjoys pallies and have the bestest of best Dinodays... Dinoupliftin', DMP 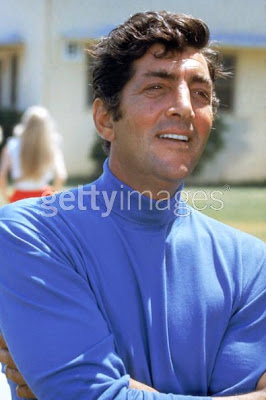 The Ambushers
1967: Dean Martin on the set of the movie 'The Ambushers' in 1967. (Photo by Martin Mills/Getty Images)

While you're out shopping this weekend, you might notice one of the new holiday music CD's on prominent display isn't so new. EMI Music is repacking Dean Martin's popular album "Christmas with Dino," including a new duet featuring Martina McBride.

Yes, you do remember correctly that Dean Martin died more than 10 years ago at the age of 78. But executives at the big recording company figure his name still has plenty of value.

In fact, EMI recently struck a deal with the Dean Martin Trust to license the late crooner's name and suave image.

EMI has long held the rights the Martin's old songs, but the company's marketing chief Ronn Werre says this opens the way for everything from Dean Martin home furnishings to men's fashions.
RONN WERRE: He had a sense of style about him, of elegance. Yet, he was very accessible. He was like the man next door. He was everybody's friend. He was the original king of cool and still is.
And that's exactly the image that EMI hopes to capitalize on. EMI realized how much value Martin's name still holds a couple of years ago when it released "Dino: The Essential Dean Martin." That "best of" CD debuted at Number 28 on the Billboard charts and went platinum. And it turned out the audience wasn't just his old fans. The album was the fifth-most-downloaded that week on iTunes.

Which helps explain why Werre thinks there's still a market for, say, a high-end line of vodkas and wines and, of course, Dean Martin barware:
MARTIN SHOW ANNOUNCER: And now here he is, direct from the bar — Dean Martin. . .

DEAN MARTIN: How long I been on, boy?
In this case, the marketing tie-ins are obvious. But EMI's Ron Werre sees this as a way to boost its bottom line in the face of slumping music sales, and he has dreams of mass-marketing other icons from the EMI catalogue — maybe John Lennon or Frank Sinatra.
WERRE: We spend a significant amount of marketing dollars building an artist's brand. And in that process, we understand the consumer that that artist is attracted to. So I just think it's a real natural extension of what a record company has done historically.
And lest you doubt the value in the big names of our past: We sent reporter Karen Donovan to talk to people at the spot where Martin's star sits on the Hollywood Walk of Fame. She found a passerby in his 20s who knew the Martin name, and that might be enough:
DONOVAN: Do you think he was cool?

MAN: I think to the kids at those times, yes, he was cool. I don't know a lot about him. Like, if I had to pick, yes, I would say, yeah, he was definitely, he was the Daddy of Cool.
She also asked one of Martin's older fans if she'd buy a Dean Martin product:
WOMAN: Not just because it had his image. It would draw my attention to the product, that's for sure.
. . . And even that woman's daughter might take noticeâ€¦
DAUGHTER: "I think a lot of people would buy that. Vintage is in, so things from back in the day are great for, you know, the new people coming up right now."
By the way, a representative of the Dean Martin Trust told us they're supportive of an approach that treats Martin as if he's still alive.
Posted by dino martin peters at 7:45 AM

Hey pallie DMP. That is so cool. I remember that you prefer to write things as if Dino is still alive. There's nothing wrong with that at all. Even though he may not be here still physically, he's here with us on another level.

Hey pallie Keith, dude, likes might I add a "higher' level....our Dino is no flyin' "higher" then ever...and freer then ever for Dinosure....