Hey pallies, likes here is an intense piece of Dinoprose 'bout the bromantic relationship between our Dino and the jer. From the blog Mark Simpson (clicks on the tagg of this Dinogram to view it in it's original format) this Dinoessay is sure to be controversial in the Dinocommunity....but loves to share the latest on our great man...so leaves some Dinopatter 'bout your Dinothoughts on Mark's Dinoperspective. Dino-only, DMP


MARK SIMPSON .com
The (Absent) Father of the Metrosexual & the Retrosexual & Spawner of Sporno 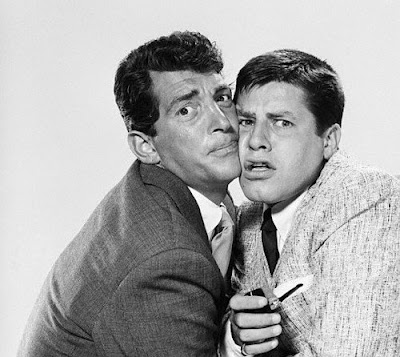 This month’s Out features a column by yours truly explaining how my childhood love for early Jerry Lewis made me the man I am today — and why his anarchic comedy partnership with Dean Martin in the ‘repressed’ 1950s was a kind of queer punk rock before even rock and roll had been invented:

‘Their heads were so close together in those tiny ’50s cathode-ray tubes — gazing into each other’s eyes, rubbing noses, occasionally stealing kisses or licking each other’s neck to shrieks of scandalized pleasure from the audience. They were a prime-time study in same-sex love. And they were adored for it — literally chased down the street by crowds of screaming women and not a few men…’. (‘In Defense of Jerry Lewis’)

Though these clips below probably explain it all rather better.

They also show how compared to Martin and Lewis, today’s much vaunted ‘bromance’ comedies are more akin to bromide. Instead of going out of their way to purge their stage romance of any hint of passion or anything physical at all in the way that irritatingly self-conscious, college-educated 21st Century buddy comedies do - the word ‘bromance’ itself suggests that any hint of erotics would be akin to incest - Martin and Lewis’ blue-collar, mid-century love-affair constantly injects it. Flags it up. And slaps your face with it. Theirs is literally a much more ticklish affair. And a whole lot funnier for it.

(Oh, and yes, it may be that I still feel fond of Jerry Lewis because his telethons never made it to the UK….)

An exploision of D&J kisses in this cheeky and charming clip painstaking compiled by a YouTube fan.


The noise made by the audience when Dean falls on top of Jerry in the bath wouldn’t be heard again until Elvis shook his pelvis.

Jerry gets some big pricks in the Navy and then sprays fluid everywhere.

Dean and Jerry join the Army as paratroopers. Watch Dean’s eyes during the blanket scene.

Spot James Dean giving a boxer a rub-down while scoping the competition.

A slightly fictionlised account of how our boys met, complete with closet clinch climax.

Special thanks to the Canadian playwright Elise Moore and Hannah for re-kindling my unhealthy Lewisian love-affair, offering insightful observation - and sending me some really great YouTube Martin & Lewis love.
Posted by dino martin peters at 7:29 AM

Hey pallie Keith, noticin' that you are stayin' noncommital 'bout this Dinotopic...

Hey this is Sarah Jo!

This is an amazing article!
Dean and Jer definitely had
a "Bromance" Trues soul mates!

And My good friend Magpie
made that wonderful first
video, "Oh, Boy" Cheers!

Hey pallie Sarah Jo, knews you woulda be so Dinointerested in this dude's Dinoperspective....hopes to see you often here at ilovedinomartin...