The way I describe the show is a celebration of Dad’s life.

Hey pallies, likes the place to be on June 20, 2012 will be the Greg Frewin Theatre -Niagara Falls, Ontario. The reason is that our most beloved Dino's boypallie Ricci will be performin' his show, "An Evening Of Dean Martin Music And More" at that venue.

From the on-line news pad, "MetroWNY," that covers news from the western New York area, comes an interview that Miss Melanie Hulick did with Ricci Martin 'bout his upcomin' show, and likes I thoughts all you Dino-philes woulda likes to read. This is one of the funniest interviews that I have ever read that Ricci has done...and Ricci's most charmin' personality shines through...remindin' us more and more of his beloved Daddy-o.

ilovedinomartin salutes Miss Melanie Hulick and the pallies at "metroWNY"....likes just figured out what that tag means.... metro Western New York! Hopes all youse pallies in that part of the Dino-universe make pilgrimage to checks out Ricci's amazin' Dino-celebration. To view this info in it's original format, likes just clicks on the tag of this here Dino-reflection. Dino-reportin', DMP

A Conversation with Ricci Martin 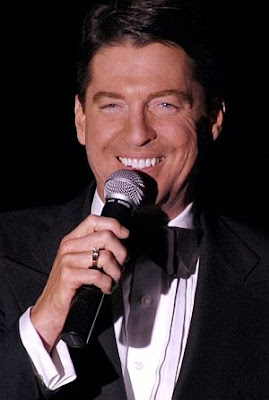 MARTIN: Well, thank you, I am flattered. You know, Melanie, in a certain sense I feel the same way in being able to do the show, because the majority of the people I perform for have that same feeling for Dad. After the show I do a meet and greet and, Melanie, the stories I hear… well you wouldn’t believe it. They’re just out of this world! Sometimes the meet and greet will go longer than the actual show. People come with pictures of them with Dad when he was in his late teens.

HULICK: I can’t even imagine that feeling. I mean, I’m sure you knew that your dad was loved, but when you started this show did it blow you away, the reaction that you could really physically see for yourself.

MARTIN: When I originally put it together, no. Now this is going back to the fall of 2002, when I brought my friends here to a club in Utah, where I live, about a half an hour from Park City. It was there that we basically put the show together and rehearsed it a few times before we took it to this little dive at the Riviera Hotel in Las Vegas. The show was put between the fake Elvis and the fake Neil Diamond.

MARTIN: (Laughs) Yes! That was six nights a week, 11 p.m. sharp. We might have three people, maybe 20, sometimes 150. We broke it in there, figured out what would work and what wouldn’t. We did that for two months then took the show on the road, and the rest is history. When things started settling down that’s when I started to appreciate everyone’s reaction and the love they had for Dad.

HULICK: Tell our readers what they can expect from the show.

MARTIN: There’s song, some comedy and a Q&A segment, where I go into the audience, which is quite literally the most hysterical part of the show.

HULICK: What question is asked the most?

MARTIN: The most frequently asked question about Dad is about the drinking, of course. My answer is always, “He drank like a fish, lady!” Then I go on and say, “No, actually…” You know, one of Frank Sinatra’s classic lines was, “I spill more than Dean drinks.” Dad always said, “Pallie, you got to get your marks, you got to know the lyrics, you got to know the lines.” You couldn’t get away with what he got away with and have the success he had and drink at the same time. I mean he had a career in stage, recording, television and motion pictures and he was a success in all of them. If someone has success in just one of those areas they’re a big star. Even Frank didn’t cross over into the TV thing that Dad did. The timing for my Dad was incredible. But as far as the questions go they are very, very sincere and I love answering them.

HULICK: I saw some clips of your show and I love the whole tuxedo thing and the old way of entertaining from that era, and you project that so well. The clip that got me was of you doing the song, “Wine Drinker Me.”

MARTIN: Really? Thank you. That’s so interesting. That’s huge in England and it was one of his biggest country hits. You know, Melanie, country and western is something that he really loved and did well with. It’s another part of him crossing over from his pop songs like “Everybody Loves Somebody” to the standards he did to country and western. He really enjoyed not only doing the westerns as far as motion pictures, he loved singing country and western.

HULICK: You know, I’ve found out that a lot of artists like doing country music. Engelbert Humperdinck is one who comes to mind. His forte is really romantic ballads, but he actually loves country music better than any of the other music he does.

MARTIN: That’s funny you should mention him. Dad and Engelbert always got along. They really liked each other. You know, country works for certain people. Frank Sinatra? Forget about it! (Laughs).

HULICK: (Laughs). What? You don’t think Frank would have been good at country?

MARTIN: (Laughs) Not so much. You know my dad didn’t listen to country music around the house. Mother didn’t even listen to my dad’s stuff around the house. When he started his TV show he really only listened to the songs he was going to perform, in the car on the way to the golf course to learn them. He had the old eight-track, then eventually the cassette tapes. Yes, it became highfalutin. (Laughs).

HULICK: (Laughs) This is not your first time playing at the Greg Frewin Theatre. How do you like it there?

MARTIN: We played there last year and we did really well. So they were thrilled and they invited us back. Everybody there is incredible! Greg ended up staying for my show last year and even did the meet and greet afterwards with me, which I really appreciated. So I am thrilled to be coming back to a really nice place like that because they take really good care of you while you are there.

HULICK: They are so “hands on” there. Greg just took the whole idea and built it from the ground up. He’s thought of everything.

MARTIN: He absolutely has. And his whole crew there, Robert Lalonde (his manager) and everybody are all really professional and they can’t do enough for you. It’s top notch.

HULICK: I had a great experience there, as well, when I went to see Greg’s show and interview him afterwards. They are a terrific group.

HULICK: Ricci, what does it feel like to be able to give your dad’s fans this gift? That’s what you are really doing in a sense, along with gaining new fans for him as well as yourself.

MARTIN: That’s true. The way I describe the show is a celebration of Dad’s life. It’s not a tribute. It’s an evening celebrating Dad’s life with his son. But you are right as far as the people who come to the show. There are the ones who knew Dad and his work and then I have the ones who bring their parents to the show to reminisce, and also I have the grandchildren who never saw Dad and the only way they can relate to him live is through me. It is an incredible feeling.
Posted by dino martin peters at 5:08 PM

Obviously, Ricci loved and respected his dad very much.

When he started his TV show he really only listened to the songs he was going to perform, in the car on the way to the golf course to learn them.

Clearly, our Dino was an auditory learner. Not a surprise, really, as he wasn't much of a reader -- of anything.

Our Dino's superior auditory skills also go a long way to explain his excellent timing in comedy. In my view, there has never been a better straight man than our Dino! And he could deliver the punch lines, too, AND knew how to "punt."

Nice interview. He's really doin' his Daddy-O some well deserved justice. Dean must be proud of his boy-pallie...wherever he is.

Hey pallie, very cool insights Miss AOW..and, yes indeed, our Dino
"knew how to 'punt.'" Just one of a ton of thin's that makes our Dino so so amazin'! Keeps lovin' our Dino!

Hey pallie, likes Danny-o was thinkin' 'long those same Dino-lines. Ricci sounds so so smooth in this interview...just likes his Dino-daddy-o! Keeps lovin' our Dino!