One of the three days we played only Dean Martin songs.

Hey pallies, likes on a few occasions we have previously spoken of the fact that our most beloved Dino was like rock musician Bob Dylan's hero...and likes today's Dino-devotion gives more proof to that sentiment. From a very interestin' Japanese blog,"seesaa," come a feature tagged "Foomy On Art, Books, Social Issues, Life & Work," where three different pallies speak of their experiences of workin' with Mr. Dylan in the post, "Bob Dylan, Past, Present."

The second of the trio of remembrances is scribed by a dude tagged Mr. David Camper who obviously played backup for Dylan. Camper remembers a time when he was in a three day rehearsal with Dylan when on.... "One of the three days we played only Dean Martin songs. We play them on the record-player, and then he’d sing it, and then we were ready, we could play the whole repertoire, we could do a gig playing all those songs." Camper does on to say that Dylan never ever did do the Dino-tunes in a gig, but likes how cool to know that rocker Dylan dug our Dino so so much that he spent a whole day of rehearsin' only Dino-croons.

ilovedinomartin is thrilled to be able to share this wondrous bit of Dino-adulation with you dudes and thanks Mr. David Camper for sharin' this stunnin' remembrance. To read the whole prose on Dylan, simply clicks on the tag of this Dino-gram.

In doin' some 'net searchin' on more possible connects between Bob Dylan and our great man, likes did find the cool pix below which features Dylan watchin' our Dino on his great Dino-show. And, likes also found a youtube clip of Dylan's cover of our Dino's "Return To Me", recorded in 2000, and released on the soundtrack album for the television show The Sopranos in 2001.

Likes always always loves find others of the rich and famous who are as sold out to our great man as much as Dino-holics likes us are. Very very cool to learn more 'bout Bob Dylan's obvious deep, pure, and true devotion to our Dino. Dino-always, only, and ever, DMP 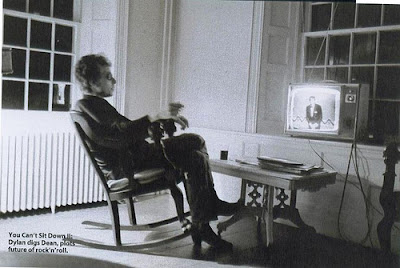 “If you ever walked with Dylan around town - which I didn’t do very often if not at all - he’d go out and disguises and he could disappear. You would look at this person and you wouldn’t think it’s Bob. I don’t know how he did it. He has ways of getting around and be unrecognizable, but then again he is recognizable every five steps.”

“We did one show, and the crowd became like Beatle-maniac, they came at the hood of the car, and on the roof of the car, and we’re were driving slow, and I was like, “be careful, we don’t wanna hurt anybody”, and then Bob looked over and said, “what’s the matter”, I said, “well, I’m frightened,” and he said, “what are you scared of, it’s only love.”
I said, well, I can’t get used to this, but then he said agaim, David, it’s only love.

We would play in a rehearsal hall for three days. One of the three days we played only Dean Martin songs. We play them on the record-player, and then he’d sing it, and then we were ready, we could play the whole repertoire, we could do a gig playing all those songs. But we never ever played them. We just polished them up and that was that. And he would do that with Johnny and Jack songs, and the Stanley Brothers and really early American artists too. He would turn us on to these things, he would bring records and make tapes for us with all that early stuff, and the next day at rehearsals we’d run through them and learn to play them. And most of them we never would play. And the first day we came together for “Love And Theft” he started playing, and he would say, I wanna play it in a style of this song. Say, we played Summer Days, and he would start with Rebecca by Pete Johnson and Big Joe Turner. Then it became apparent to me, that he’d been training us over a year to learn these old styles. That way, we were far more prepared for what he had in store than had he not gone through this precedure. We never talked about this, maybe that’s the way I took that process, it certainly was like going to college for me, or to a school of Bob, or a school of Americana music, presented by Bob.”

I never heard that until now!

Hey pallie, likes Miss AOW, ilovedinomartin has featured several posts on Bob Dylan's devotion to our Dino...but likes I thinks this is the only one that validates that Dylan "studied" Dino. Thanks for stoppin' by and, likes of course, keeps lovin' our Dino!