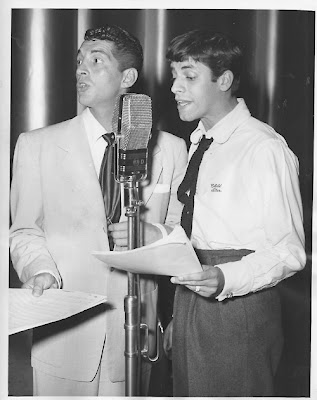 Hey pallies, likes today is yet 'nother incredibly important date in Dino-history.  Likes  as we were   perusin' Dino-lerts sent out by the pallies at Twingly Advanced Blog Search,  we came 'cross this little gem of a note 'bout 'nother great day in Dino-history. Likes from the self tagged  blog, "DIANE"S CORNER." comes the news that it was on this very day, April 3, in the year of our Dino 1949 that our most beloved Dino and his most beloved  partner Jerry debuted on the NBC Radio Network with their self-tagged programme, the "Martin and Lewis Show."

Likes always so so pleased to learn 'nother great historic date in the life and times of our great man.  ilovedinomartin sez our thanks to Miss Diane  for sharin' this Dino-note with the world. To view this in it's original format, likes just clicks on the tag of these here Dino-words.

Likes we are  includin' a couple of cool pixs of our Dino and Jerry in front of the mic and a  youtube vid  from the radio programme....actually we are totally totally thrilled to have found the first episode that has Miss Lucille Ball as guest.  And, as we listens to this historic recordin' we gotta 'fess up that it is as fresh and funny as when it first aired! 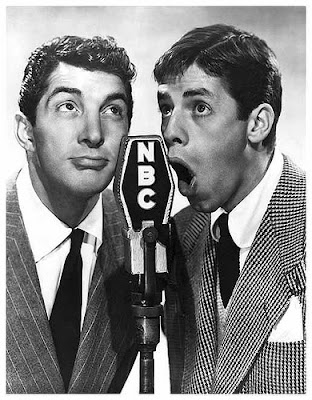 1949 - Dean Martin and Jerry Lewis debuted on radio on the "Martin and Lewis Show". The NBC program ran until 1952.

Starring Dean Martin and Jerry Lewis. Guest starring Lucille Ball. The greatest comedy duo of ALL TIME! I
Posted by dino martin peters at 7:21 AM

Cool stuff, pal. So many years ago! Good Info!

Hey pallie, likes Danny-o, truly "so many years ago!" BUT there never was and never will be a comedic duo likes our beloved Dino and his beloved partner Mr. Lewis...truly one of a kind! Keeps lovin' 'n sharin' our one, our only DINO!