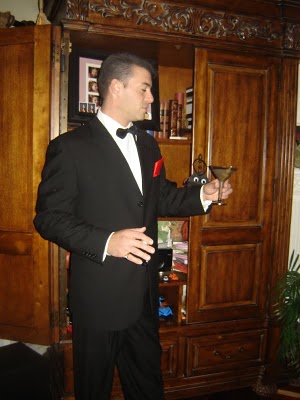 Thins' have been so so crazy durin' these last few weeks...my Mondays seem like Fridays & Wednesdays are like Saturdays!!!
Man!
Hopes I'm not writin' Danny G's THURSDAY Serenade with Dino!!! Haha!!

Not that that would be a bad thin', either!

Some good...some not so great.

But guess what, mi amici!
It's time to start fresh!!!

And...my friends...I'm POS I TIVE Dino will help swing us into the BEST year yet!

Now pals...I'm SURE I've shared my crazy little New Years tradition with all youse cool cool Dino-philes before.
But...it's just one of those VERY special little thins' that I loves sharin' with all my fellow Dino-holics.
So....here it is, again.

Actually this was somethin' my Nanna G. would do with my bro & I on New Years Eve, while Mom & Pop were out dancin' & celebratin'.

We got such a KICK outta this yearly routine as kids, that I STILL do it to this very day with my mini Dino-holics! Haha!

Nanna was such a SWEET & FUN lady!
My earliest memories of Dean were actually with her & I wathchin' Martin & Lewis flicks in her parlor.
Yes sir pallies...that's where it ALL began!

What do youse say we bid farewell to the old year & say "Hey there, pallie" to 2018...with a little "Winter Romance"?
I think it's PERFECTO to ease us into a new wintery season...as well as a COOL COOL NEW YEAR!

Well, mi amici...let's ALL thinks of the message Nanna G. was tryin' to instill in our young minds.
Let your old worries go...leave them in the past...And enjoy life from today goin forward!

Dean spreads the same vibe to me now & EVERYDAY!

Happy New Year to all the Dino-philes who frequent this blog site!

Another year has come and gone once again. I would say 2017 was a pretty good year overall with a few bumps in the road but that is normal of course. We have so much to be thankful of course and with a brand new year here a lot to look forward too. Hopefully it as good if not better then the last one. A wonderful way to bring in the new year Danny G., with a great Dean Martin tune. Thanks once again my friend for all that you do.

Same to you, pal! Salute to all!

Happy New Year to all Dino-zens at the blog! Here's to a happy and prosperous, and safe 2018!

2017 was a rough year among Dino-zens, lost too many people in and around the Dean Martin family.

Hope we have a great Dino year!