"..... as Martin's truly beautiful voice is accentuated in all its subtle glory."

Hey pallies, likes welcome back for a third helpin' of deep Dino-delight from the blog "Vox Pop Music Album Guides" and revealin' reverent reflections by Brit  blogger "Mr Right Wing."  Today's devotion to our most beloved Dino centers on what many Dino-holics consider to be one of the best, if not THE BEST recordin' of our marvelous man's cool career....."Dream With Dean - DEAN MARTIN."

For starters, once 'gain Mr RW lists all the swank songs of this awesome al-b-um of Dino-glory.  And, once 'gain this is followed by the most marvelously magical missives of Dino-adulation with quotation 'pon quotation of incredibly intense insights that read likes the purest of pure poetry in the hugest of huge homage of our one and only Dino.  Likes, youse gots it pallies, we have yet once 'gain chosen the cool comment that we deeply deeply digs the most to tag today's Dino-thoughts..." "..... as Martin's truly beautiful voice is accentuated in all its subtle glory."  Ain't that simply filled to the brim with awesome adulation of our Dino?!?!?!?!

For a third time we share our thankful thanks with Mr Right Wing for 'nother outstandin' opportunity for liftin' up the glory of our Dino with his readership and certainly helpin' many many of 'em to fallin' deeper and deeper in love of our one, our only Dino!  To checks this out where we found it, just clicks on the tag of this Dino-gram.  And, yes, pallies, come on back tomorrow for our fourth and final intriguin' installment of cool celebration of remarkable recordin's by our King of Cool. 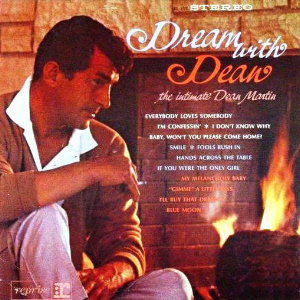 "An intimate, late-night affair recorded with a small combo and spare arrangements."

"Martin decided to cut a concept album of slow ballads, sung as slow as they could be sung, with an intimate backing of just four pieces. The resulting sound is, of course, sparse and mellow, but it actually works very well behind Martin's voice, which sounds deep and soothing, a little bit as though he were singing directly into the listener's ear, trying his best to contain the emotions expressed in the lyrics."

"Dream with Dean might be the crooner's best album. Backed by a small tasteful quartet this is the polar opposite of the music that is normally associated with Dino. The album is all the better for that difference as Martin's truly beautiful voice is accentuated in all its subtle glory. The result is a stunningly intimate recording."

"The arrangements though tasteful vary little from song to song and listeners are left begging for a little drama. Still hearing Martin in this context is well worth the effort and the album is in general a success. While Martin had a reputation for being indifferent to just about everything, this is a real serious attempt at some kind of art."

"Dream With Dean is what many consider a 'Dino unplugged' session, if you will, away from all the glitz and glamour and hype and swing, just Dino, the boys in the small group, and you. Clearly an after hours mood album that even Frank Sinatra must have been thrilled to hear."

"Dream With Dean is a quiet and very relaxed meander through a dozen standards, simply accompanied by four musicians. Dean is completely relaxed, and there is no doubt this minimal backing provides the perfect setting for his understated style which represents the ideal package for late night listening."

Nothing like Dream with Dean, candlelight, and a glass of good brandy.

Hey pallie, likes Miss AOW, that sounds like a potent pack of pleasures for sure. Keeps lovin' our most beloved Dino!

It looks like Dean lives on and it is always wonderful to see that so many people still keep Dean close to there heart. Thank you DMP for bringing this great read our way.