Hey pallies, likes on this 7th day of Dino-winter-month likes we are in 7th heaven 'cause our deeply delightedly devoted to Dino pallie Scotty has shared 'nother sweetest of sweet Dino-treat with his readership over at his beau-ti-ful blog "BlueisKewl."  Likes Dino-winter-month is a special season of Dino-giftin' and our Scotty-o is the bearer of mucho mucho Dino-gifts, but not just durin' our wintery Dino-celebration, but all year long, and we are always always absolutely appreciate of his extraordinary efforts in the cause of spreadin' lotsa love to our Dino.

Most recently Scotty shared the hottest of hot shot of our most beloved Dino and his co-star Miss Corinne Calvet from Dino and Jerry flick numero duo, the 1950  "My Friend Irma Goes West."   It is truly a powerfully provocative pose that elicits extremely evocative energy in the viewin'....a tremendous testimony to those oft quoted words by our Dino's producer/director of the Dino-show, Mr. Greg Garrison...."Women wanted Dean and men wanted to be Dean."  Just view this incredible image incredibly illustrates that with-out-a-doubt Dino-truth!

Along with a bit of pertinent patter, Scotty also shared images of two original posters advertizin' "My Friend Irma Goes West."  We can't thank our Dino-addicted pallie Scotty-o 'nough for his extremely valuable efforts in spreadin' the Dino-message of cool at his own cool blog, and in this Dino-winter-month givin' us such delightful Dino-cheer to warm us up and keeps us devoted to our one and only Dino!  To checks this out in it's original source, simply clicks on the tag of this here Dino-gram.  Dino-always, ever, and only, DMP 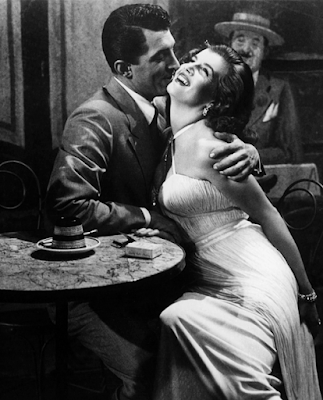 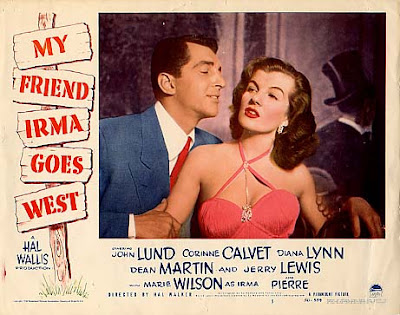 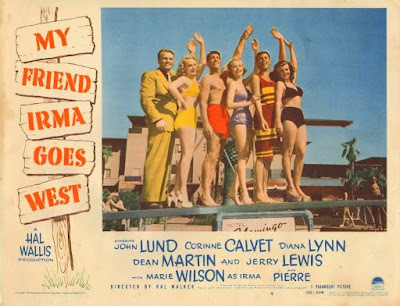 My thanks to DMP and Danny G. for all your continued support. I am glad i was able to make a small contribution in the Dino merry month of December. Keep up the great work guys.

A happy holiday season to all.

Hey pallie, likes Scotty, we are deeply delighted to share your Dino-devotion with all who digs our most beloved Dino! We can't wait to see what new Dino-treasure youse will uncover next! Keeps lovin', keeps sharin' our one and only Dino!