Hey pallies, likes it's December 21, just four short days before we reverently remember the 20th anniversary of our most beloved Dino's passin' from our presence on December 25, 1995.  Likes don't knows 'bout you dudes, buts we misses our Dino more and more with each day that passes, and likes not only for his talent...which is incomparable to any and all other entertainers, but for  his guidance and direction 'specially in a world that is ever more in sadness and despair and fear.

Today, we are most pleased to share with you an excellent essay by a guy tagged Bob at his self-titled blog, "BRAINSTEMBOB'S GUIDE TO BETTER LIVING - Notes From the Suburban Underground."   Not surprisin' to all us Dino-holics, Bob knows the tremendous truth that indeed our Dino is the swankest of swank source for better livin'!  His potent prose tagged "Friday Song: ‘Baby It’s Cold Outside’ by Dean Martin," speaks of all the various voices 'round us speakin' fear into our lives....even when it comes to "WINTER STORM WATCHES."

Warmly 'n wisely Bob declares our Dino to be an awesome antidote to all the fear fallin' 'round us.  As Bob sez, "I’m going to follow Dean’s lead. Watch the snow fall. Light up the fire. Mix up a cocktail or two. Put some Dino on the hi-fi. And not be afraid of everything all the time."  Thanks goodness, even though our Dino has long 'go physically  departed from our presence, his  presence is more powerfully with us then even before courtesy of all sorts of  tremendous technology.....still guidin' and directin' us.

We thank Mr. Bob for is touchin' and tender thoughts, pointin' his readership in the direction of our Dino, encouragin' all of us to follow our Dino's lead.  To checks this out in it's original source, simply clicks on the tag of this here Dino-message.  Dino-guided, DMP 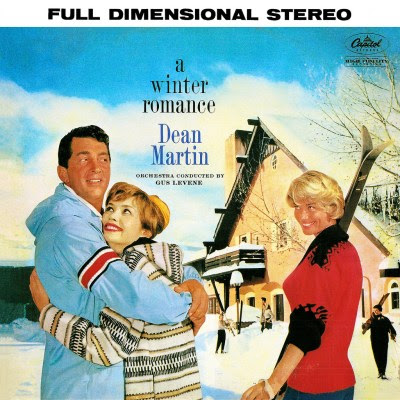 Well, well, well…Every year, the first significant snowfall of the year is bearing down on us here in Michigan, and with it the non-stop warnings to be prepared for the end of the world. We’re predicted to get a few inches of snow, which means in reality we might see two, but that’s not stopping the media from issuing one WINTER STORM WATCH warning after another. Every year, it’s headline news. And every year, it drives me kind of crazy.


I guess we need to add ‘a little bit of snow’ to the ever-growing list of things that our politicians and our news media want us, no need us, to be afraid, very afraid of. The politicians need us quivering with fear to keep their jobs. It’s as simple as that. They need the fear, because a freaked-out populace is quick to get behind even the worst of ideas. The media would like us to be afraid, and stay afraid, because scared people stay glued to the TV (and even worse, the internet) to stay up-to-date with the very latest thing we need to be afraid of. And all those eyeballs are money in the bank to the media, who sell our fear to advertisers. You know, their real customers.

I get tired of all the fear-mongering. It ramps up around this time of year, with the fake ‘War on Christmas’ (taken to new heights of absurdity this year with the ridiculous fight with Starbucks over their non-Christmasy red coffee cups) and the fear of snowfall, and the fear of everything else.

Last weeks’ horrifying terrorist attacks in Paris have led our leaders to immediately start trying to pass new laws to keep the Syrian refugees out of the country for fear there may be terrorists amongst them. These refugees are fleeing from horrifying conditions, but sorry folks, you’re on your own. Even though all of the identified Paris terrorists were European citizens with EU passports. 100% European nationals, 0% Syrian refugees. But, by all means, let’s refuse these poor people any refuge. It’s almost as idiotic as going to war with Iraq in 2001 because a group of Saudi nationals attacked the U.S. These terrible events simply act as opportunities for politicians to drive through their agendas that would be seen as despicable under normal conditions. We’re much more malleable as a nation when we’re scared…

…Which gets me back to the fact that it’s supposed to snow a little and the Powers That Profit From It want us to be afraid of it. But, what does this have to do with my Friday Song? Well, it comes down to this. I’m not scared. Not even a little bit. I’m not afraid of Starbucks cups, I’m not afraid of Syrian refugees, and I’m definitely not afraid of snow. I’m in Michigan, it’s mid-to-late November…Snow is what happens around here. Big deal. I’m looking forward to it.

I’m looking forward to it because it gives me the opportunity to listen to some Dean and some Bing and more without the rest of the family giving me strange looks.

This song obviously isn’t an obscurity; ‘Baby It’s Cold Outside‘ is one of the great Winter/Christmastime songs of all times. There’s tons of great versions by so many artists, but this one by Dean Martin is the best. In my opinion. Written by Frank Loessner in 1944, and recorded by Martin in 1959 for his 1959 album ‘A Winter Romance.’ I pick the Friday Song based on how I’m feeling, what kind of mood I’m in. And today I’m feeling like if it snows tomorrow. I’m going to follow Dean’s lead. Watch the snow fall. Light up the fire. Mix up a cocktail or two. Put some Dino on the hi-fi. And not be afraid of everything all the time.

Posted by dino martin peters at 7:50 AM

Wise man, this Bob! He DEF I NATE LY speaketh the Dino-truth too!

Hey pallie, likes Danny-o, likes the wisest of the wise...likes 'nother great testimony to the transformin' power of our most most beloved Dino. Keeps lovin' & keeps sharin' our main man!

Nobody ever sang this tune as well as our Dino.

Hey pallie, likes you sez it Miss AOW....this song was meant to be sung by our King of Cool..for Dino-sure. Keeps lovin' our most beloved Dino!

Thank you my friend for bringing this wonderful blog from Bob to out attention. A great DM song that sounds as good today as the day it was released!

Thank you once again for a great read as well as a great song, a real Christmas treat!

Hey pallie, likes Scotty-o, we are most moved by Bob honest and heart-felt words on the transformin' power of our most beloved Dino. Dino is always 'bout absolute amore and never ever fear. Keeps lovin', keeps sharin' our Dino.