Hey pallies, likes are we pumped or are we pumped?!?!?! Likes after what seems likes a huge 'mount of Dino-time lapsin', our huge huge Dino-diggin' pallie Scotty has 'gain returned with 'nother fabulous Dino-pose over at his coolest of cool blog "BlueisKewl."  Likes, likes normally on at least a weekly basis we tries to goes over to Scotty's pad checkin' for Dino-action, but lately we gotta 'fess up that we musta been as they sez asleep at the Dino-wheel, 'cause likes three weeks 'go Scotty shared this coolest of cool Dino-image that we just discovered mid yester-Dino-day and we knew we had to share it this very Dino-day.

It's a Dino-pix that we ain't rememberin' seein' before and we have tagged it "The Rugged Dino."  We guessin' that it perhaps was snapped on location of one of our Dino's flicks, most probably one of his western adventures.  Wind tossed  hair, needin' a shave, our Dino gives forth with his beau-ti-ful Dino-buddha grin!

We shares our awesome appreciato to our Dino-holic pallie Scotty for sharin' his pure passion for our most beloved Dino at his blog, thus helpin' his readership fall father head-over-heels in love with our King of Cool.  Likes to checks this out in it's original Scotty space, simply clicks on the tag of this here Dino-gram.  Always Dino, Always, DMP 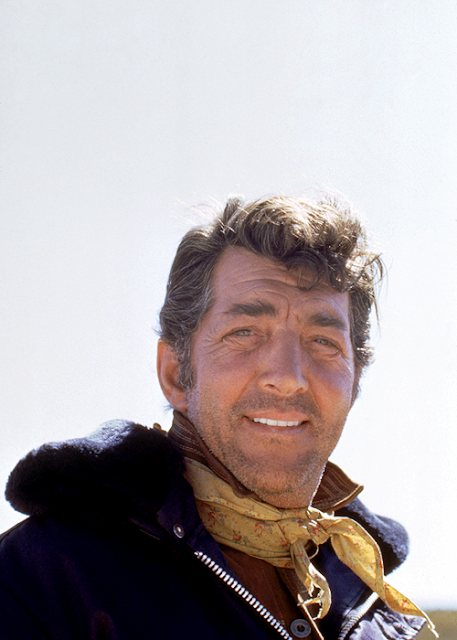 The shirt Dean is wearing is from the western movie Bandolero. A piture from this photo shoot is used on the cover of the album "For The Good Times" minus the coat and neck scarf. Must of been a cold morining in Arizona, or Texas, or Utah which were some of the filming locations. I know it's Ed Thrasher who did the photo shoot so more n likely this is his work.

Shoulda said in my first post you tell that the shirt is from Bandolero(at least I can) from the stitching in the collar and the button.

Hey pallie, likes dude thanks ever so much for dem Dino-details. We loves how true devotees of our Dino pay special attention to each and every fact 'bout our most beloved Dino. Always great to have you do some patterin' our Dino-bro. Keeps lovin', keeps sharin' our most beloved Dino!

Thank you for your kind words my friend. I was glad to be able to find this photo of DM - i think he looks just incredible in this shot. Of course there was no real info to go along with it but i am glad to learn a few things from reading the above comments.

Thank you for all your tireless hard work in keeping the spirit go DM alive and well!

Hey pallie, as always Scotty-o you are most welcome. Indeed we would say this is truly, as you say, an "incredible" candid of our amazin' Dino. We hopes to finds mucho more Dino-treasure at your cool blog "BlueisKewl." Keeps lovin', keeps sharin' our most most beloved Dino!