Scotty's Sharin': Powerfully Perfect Poses Of Our Most Beloved Dino

Hey pallies, likes our Dino-devoted pallie Scotty has struck Dino-gold once 'gain in likes the hugest of huge Dino-ways at his very cool blog, "BlueisKewl."  Likes when we went over to Scotty's site last evenin' we were likes totally totally smitten by a couple of Dino-poses that he had just shared. Likes they seem to us to be pixs of our most beloved Dino snapped durin' his early years as a performer.

Likes these are two Dino-images that we don't ever remember seein' before, and likes we knows if we had, we woulda certainly remembered viewin' 'em.  We are especially taken by the first pose and it certainly is the most powerfully perfect  example of our most beloved Dino's most irresistible glance.
Likes we ain't got a clue where our Scotty's wrestled up these classic images, but we are thrilled he did!

We salutes our pallie Scotty for his on-goin' efforts in spreadin' amore of our Dino at his blog.  We just wishes that the Dino-world was filled with tons more pallies with Scotty's awesome adulation of our main man.  To checks this out in it's original format, simply clicks on the tag of this here Dino-report.  Dino-awed, DMP 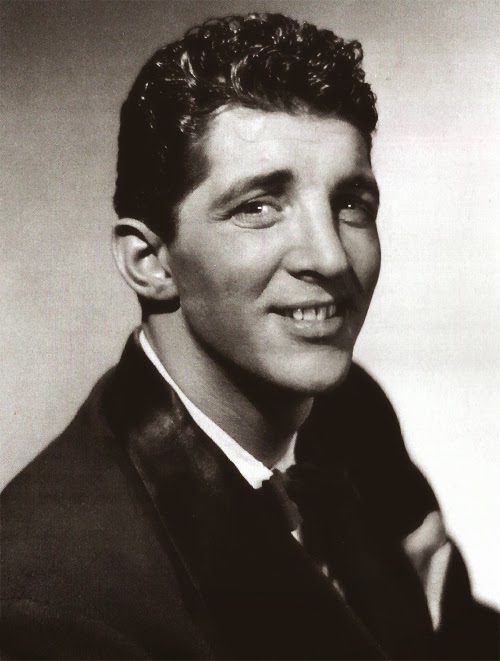 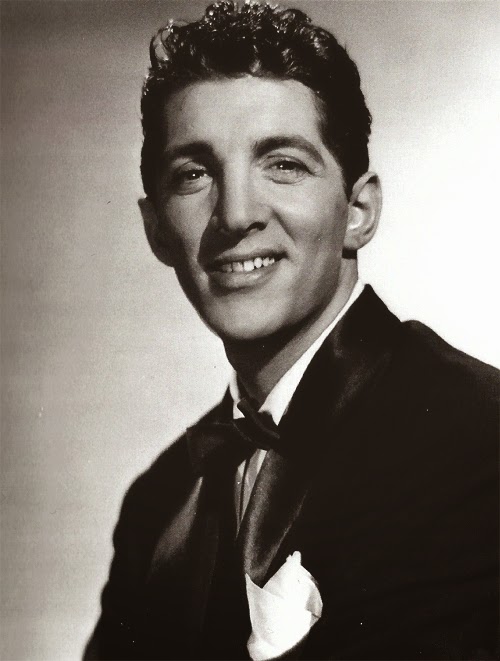 One of the most popular and enduring American entertainers of the mid-20th century, Martin was nicknamed the "King of Cool" for his seemingly effortless charisma and self-assuredness. He and Jerry Lewis were partners in the immensely popular comedy team "Martin and Lewis". He was a member of the "Rat Pack" and a star in concert stage/nightclubs, recordings, motion pictures, and television. He was the host of the television variety program The Dean Martin Show (1965–1974) and The Dean Martin Celebrity Roast (1974–1985).

Martin's relaxed, warbling crooning voice earned him dozens of hit singles including his signature songs "Memories Are Made of This", "That's Amore", "Everybody Loves Somebody", "You're Nobody till Somebody Loves You", "Sway", "Volare", and "Ain't That a Kick in the Head?".
Posted by dino martin peters at 7:04 AM

Thank you my friend for your kind words. I just came across these two photos and did a double take when i read the caption that it was DM. I don't think i have seen Dino so young in his career before and i hoped you would like them when you saw them. I did not know they have not been seen before which makes them an added bonus.

It really is amazing that after all these years there still is Dino treasure to be found.

Thank you for your continued support and encouragement - this is one of the reasons i always keep my eyes open for any DM material.

Thank you for all your hard work and efforts in keeping the DM flame going as strong as ever. I look forward to all your postings on 'ilovedinomartin'!

Hey pallie, likes Scotty-o, you are most welcome for the "continued support and encouragement," which, of course, is always such a pleasure to be able to do for you. ilovedinomartin is 'bout helpin' pallies like us develop a deeper relationship with our most beloved Dino and with each other. It brings us pure joy to see you grow deeper and deeper in your devotion to our main man. Can't wait to see what new Dino-treasure you will be uncoverin' and sharin'! Keeps lovin', keeps sharin' our most beloved Dino!

I've seen these photos before, but it's been ages.

I may have seen these in a very old edition of Photoplay Magazine, which used to offer regular photo spreads of our Dino.

Hey, does anybody her know when our Dino had his teeth capped? I know that he did, but I don't know the approximate date.

Hey pallie, likes youse know Miss AOW, we digs knowin' each and every single detail relatin' to our most beloved Dino. Sad to say, this is one item that we ain't yet run 'cross. Likes we don't think that even Tosches gives a date for this Dino-event. Keeps lovin' our most beloved Dino!