The Matt Helm movies had been playing on TV during the week and so we thought a name with Dean Martin in it would be spot on. 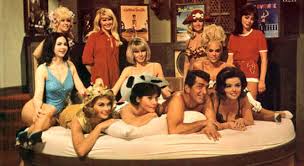 Hey pallies, likes have we gots an incredibly inspirin' item of Dino-devotion for all youse pallies this day.  Today we turn to the mighty and marvelous  musical blog pad, "Cloudberry Cake Proselytism V. 3" where an indie music lover tagged "Roque" hangs out.  "Roque" proclaims his musical  mission by sayin'   "I'm starting this blog to go along with all my indiepop projects, to recommend some bands, to make you track some old 7″s, and interview the people that are interesting to me. I just hope you like it."

Well, we gotta say that we deeply digs the topic of "Roque's recent review on February 24 of this Dino-year.  Tagged "Me and Dean Martin," the post accents an interview with a Mr. Seamus Allison of the " fab jangly band from Nottingham (England)  from the late 80s" known as "Me and Dean Martin."

Likes when we found it, likes we were powerfully potently psyched to learn that 'nother swingin' band had givin' a knowin' nod to our most beloved Dino!  Likes, we are sharin' a brief excerpt from the entire interview (to reads it all, simply clicks on the tag of this here Dino-gram) that speaks of how the band gots it's Dino-name.

As fanatic fans of our Dino and swingin' spyster Matt Helm, likes of course, we were wonderfully wowed by how the bands viewin' of the Helmers on the small screen played hugely in how they made the deeply devoted decision to homage our King of Cool in the tag of their musical group!   Puttin' name of our most beloved Dino as part of their tag proclaimed to the whole wide world their deepest, purest, and truest love for our lovable man!

We thanks "Roque" and all the pallies at  "Cloudberry Cake Proselytism V. 3" for doin' this very informational interview and for  Seamus Allison first person remembrance of how their hugely homaged our King of Cool in their band name,  Dino-awed, DMP

:: Me and Dean Martin

Thanks so much to Seamus Allison for the interview! Me and Dean Martin was a fab jangly band from Nottingham from the late 80s who released two 7″s, both of them highly recommendable! So if by any chance you haven’t heard about them before now it’s time for you to discover them!

++ Where does the name come from? I guess you were big Dean Martin fans?

We were regularly rehearing and writing and planned to record some demos. One night, following rehearsals, we were sitting in the pub and decided we needed a name. The Matt Helm movies had been playing on TV during the week and so we thought a name with Dean Martin in it would be spot on. We discussed this at some length over drinks and next day all we could remember of the debate was the phrase Me and Dean Martin so we took that as an omen. It helped that Marek and I were big fans of the Rat Pack.
Posted by dino martin peters at 7:20 AM