The Tao of Dino 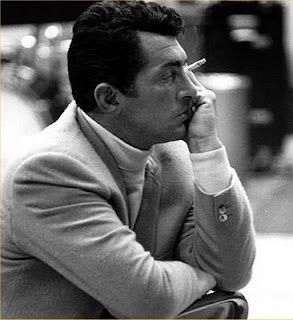 Hey pallies, likes his tag is Howard Spierer and he hangs his hat at his blog pad, "Man-Up: A guy’s guide to living a man’s life with integrity, strength and a smile."   He is a scriber of all thin's male....obviously a man's man and obviously a true knower and true digger of our most beloved Dino!

Simply seekin' to be led by our Dino in doin' a bit of searchin' of the ol' web, I typed in the words Dean Martin and Tao, and was directed to a May 21 post by Mr. Spierer
tagged, "The Tao of Dino – Mastering the Art of Being the Man Behind the 'Guy'."

Usin' as a backdrop to his prosin' Spierer compares the roles of our great man and Mr. Frank Sinatra in all thin's Rat Pack.  While in Howard's perspective, Sinatra is definitely the "Alpha Man,"  he gives the hugest of huge nods of approval to our Dino for the coolest of cool reality that " his personal life he was not trapped by his public persona."

Certainly Mr. Spierer nails "The Tao of Dino," encouragin' all us pallies to seek to follow in the way of Dino.
While our King of Cool did it effortlessly, and all us mere Dino-wanna-bes will of course struggle to in our efforts to live life in the path of Dino, none the less what a worthwhile effort it will be.

ilovedinomartin salutes male writer Mr. Howard Spierer for wisely puttin' the accent on our Dino in this wonderfully wise way and helpin' his readership to see the wisdom in followin' the Dino-path.  To checks this out in it's original format, simply clicks on the tag of this here Dino-gram.   Dino-desirin', DMP

The Tao of Dino – Mastering the Art of Being the Man Behind the “Guy”.

Last entry I wrote about the importance of getting yourself into a Rat Pack, a group of men outside your normal circle that allows you to personally benefit from the diversity of the group. I also cautioned about being too quick to be the Pack’s Sinatra. Here’s my thinking:
Inevitably any time men form any entity there is this initial alpha male impulse to struggle for the seat at the head of the table. Avoid getting sucked into that black hole. I am not saying don’t aspire to be a leader. I am just cautioning against being the publicly acknowledged leader. Using the Rat Pack analogy helps here. If you think about it, it was always Sinatra and the Rat Pack. And while Frank’s career and ego certainly benefited from his holding the mantle of the “Man,” his personal life suffered. His relationships were tabloid fodder and every thing he did and said seemed to become a lightening rod for some reaction from someone, somewhere. His kids suffered from being caught in the glow of his spotlight to the point of being regular targets for wannabe kidnappers. But through all this there was another member of the Rat Pack who was inarguably successful in his own right, Dean Martin. For a few years, along with Jerry Lewis, he held the title of top box office draw in the movies. He had a ridiculously long running TV show driven by his public persona of the hard drinking womanizer. But his personal life he was not trapped by his public persona. Not many people know about his three marriages and seven kids and rumor has it the guy was home for dinner with the family almost every night.
Politically, history is rife with shadow dictators. The confidantes who had the ear of a president or dictator but usually avoided the fall out when the masses decided they had had enough. During the first term of the Bush administration, Dick Cheney got a free pass in his role of puppeteer until the media finally woke up. And of course if you turn to reality TV you can get a weekly lesson in the pitfalls of being pegged as the leader by watching Survivor. As soon as Jeff Probst outs the leader of the tribe it is just a matter of time before the rest of the tribe is scheming to get them booted off the “Island”.
So what’s an alpha male to do? Those who know me, know that I have been thrust into leadership roles quite often. They also know how much I hate it. Just to be clear, I don’t hate being a leader, I just hating being acknowledged as a leader. If that doesn’t make sense, let me explain. When I have been clearly recognized as the man in charge, I have come up against four reactions.
That of the Slacker – who thinks, “I don’t need to worry about anything, Spierer will do it”. And they just sit back and gladly ride my coattails,
The Spoiled Brat – who no matter what I suggest, takes a stand against it solely because it was not their idea.
The Bully – who will whisper in my ear and try to curry favor with me in the hopes that I will do their dirty work.
The Trickster – who will be forever scheming to undermine my goals because they want my job.
My experience has been that getting anything done when I occupy the title of “the Man” is a struggle. When I really get to accomplish things and have some influence though is after I step down. Then, when I speak everyone seems to listen. Things I said just a month earlier suddenly make sense and seem totally plausible. People just develop a different listening for me.
So there are two take aways from this. Now, when I am actually “in charge” I try to attain some marginal success in the job and then get out as quickly a possible. It is important to earn the cache of “been there done that” but it is even more important to take on the mantle of beloved elder before the glow of that success fades. After all, everyone is always looking for flaws in their leaders, not so with the man behind the curtain and definitely not with the beloved old patriarch.
The other thing I try to do is utilize the discipline of leading from the back of the room, even if I am the man in charge. By that, I mean I let someone else be my mouthpiece. I let someone else maintain the order in the room and I let some else garner the credit for a job well done. It ensures I sleep better at night and makes me less prone to getting picked off by a sniper.
Posted by dino martin peters at 7:17 AM