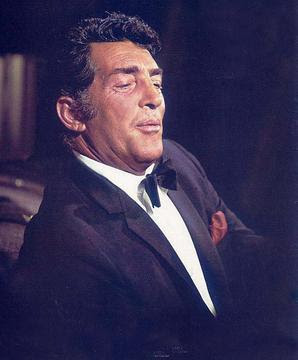 Hey pallies, just so so stellar to find more and more pallies openly declarin' there Dinopassion in Dinoprint....today's Dinodiscovery is a lady tagged Pat Clark, Scene Editor for the Modesto Bee, sharin' with the world her crush on our Dino and her lovin' of our great man's way of singin' Dinowintertunes. I have printed the portion of Miss Clark's column that is Dinofocused, but likes it you wanna read the whole column, likes just clicks on the tagg of this Dinogram. As we move ever forward to Dinowinterday, so so great to find others who know that truly only our Dino matters..... Dinosharin', DMP

OK, enough grousing. It's Christmas and there are more important things to talk about.

Like my posthumous crush on Dean Martin, of course.

But it's really not. Sure, Dino's been gone a long while now. Plus, if he still were with us, he'd be old enough to be my grandpa.

Still, none of that takes away from the fact that his croon-alicious Christmas songs were then, are now and forever will be the catchiest, the kickiest seasonal tunes to be found.

I've been toodling about in my car, bebopping with jazz hands all season thanks to the holiday stations on ye olde satellite radio. I'm completely charmed by the '60s-era tunes crooned by Martin.

I can picture him, cigarette between his fingers, sitting on that big piano on the set of his 1960s television show, handsome, smiling, singing and looking almost unbearably suave.

Look up "suave" in the dictionary and we all know who's picture we'll find there.

Of course, cigarettes hardly are suave these days, but in the '60s, they were cool, cats. It's a sad note that he ultimately contracted lung cancer and died on Christmas Day 1995.

I don't even think "Baby It's Cold Outside" references Christmas in its lyrics, but it's all about the winter's cold and it's played often on the holiday stations. Maybe you've heard it: Dino and some unidentified female -- whose credit on the song seemingly fell victim to 1960s sexism -- sing a back- and-forth duet, sparring over whether said female will head home on a cold winter's night or stay at his place for another, um, drink.

"My mother will start to worry (Beautiful, what's your hurry?)/My father will be pacing the floor (Listen to the fireplace roar)/So, really, I'd better scurry (Beautiful, please don't hurry)/but maybe just a half a drink more (Put some records on while I pour)."

It's utterly adorable and you can hear the smile in Martin's voice as he sings. Who wouldn't have a crush?

There's just nothing like an old Christmas standard sung by an old standard to make sure the warm fuzzies stay in your holiday.

I LOVE THE PICTURE OF DINO ALONG WITH THIS WONDERFUL ARTICLE PALLIE!

I think Dino Martin would be just as entertaining in today's world of entertainment.

Much of what he did was to break new ground that others followed in the entertainment business.

Hey pallie Glenn, great Dinoinsights and of course, I totally agree with your Dino-opinions!!!!

Hey pallie DMP. Cool pix and article. I really had fun reading that. Dino would be tops on the charts today. His music is timeless. There's nothing like Dino Christmas music. It's never quite the holiday season without some Dino Christmas tunes. He always makes the holidays cooler and hipper. Cheers!

Hey pallie Keith, exactly...no one makes me happy likes our Dino...and his way of croonin' a Dinowintertune brings me special Dinohappiness as we prepare to honor our Dino on Dinowinterday...