Hey pallies, likes I have been waitin' for Dinoever to post 'bout this cool Dinoaction Dinofigure as part of my Dinodevotion as we move Dinoever Dinoforward toward Dinowinterday. This Dinoholic dude tagged Neal Patterson shares his cool story of how he came to true Dinodevotion. How cool is it that it was when his daddy-o took him and his bro to "Airport" that he proclaimed our Dino as his hero. Well as you will read Neal loves our Dino as Matt Helm and so Dinodesired to have his very own Dinoaction Dinofigure...so reads on to see how he created one of his very Dino-own. Pallies, who how I Dinocrave to have one of these Dinofigures in my Dinostockin' for Dinowinterday. If you wanna read Neal's Dinostory in it's original settin' at his hip blog Polyvinyman, likes just clicks on the tagg of this Dinogram. Dinohopin' for Dinowinterday, DMP

Presenting childhood memories and adult obsessions of action figures and related toys from the 60s and 70s. I also delve into the art of customizing action figures to create one-of-a-kind figures the toy makers didn't think of or didn't get around to making.


DEAN MARTIN AS MATT HELM
I’m sure I’m not alone in my belief that Dean Martin was the coolest actor to ever appear in movies. There are plenty of actors that I think were pretty cool (Clark Gable, Robert Mitchum, etc.), but none of these actors combined manliness with impeccable comic timing like Dean Martin. Who else could’ve held his own next to Jerry Lewis for 10 years, and still had a long, successful career afterward both in comedy and drama? He played a wide range of roles, but he was always essentially Dean. That may sound like a put-down, but I really mean that as a compliment. No matter the character, whether he was an alcoholic gunslinger or an airplane pilot, you always sensed an underlying truth to his performances because the essential person that was Dean Martin always came through. And that person was damned likable.

I didn’t always feel that way. When I was a pre-schooler, I became frightened of him whenever he would come on the t.v. screen in his variety show. To this day, I don’t know what caused this irrational fear, but whenever Dean popped on the screen, sliding down the fire pole with his glass of scotch, I would start to cry and my mom would have to put me to bed.


Then my dad took my brother and me to see Airport. This was the first grown-up movie I ever saw in a theatre, and I was mesmerized. So much action, so much tension, so much excitement. And right in the middle of it was Dean Martin, saving the day as the cool, in-control pilot Captain Demerest. I suddenly saw Dean Martin in a whole new light. He became a hero. 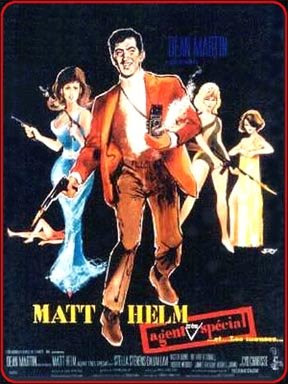 Around the same time, the Matt Helm movies were seeing regular rotation on television. They were clearly inferior to the James Bond films, but I got a big kick out of Dean Martin playing the hero again. Unfortunately, not only were the films trying to spoof James Bond, they were also caught up in the era of camp where the thinking was, the more ridiculous the better. In fact, audiences quickly realized that, not only was ridiculous not very exciting as it killed all sense of suspense, ridiculous was also not very funny when ladled out in heaping spoonfuls. The Matt Helm movies were devoid of any suspense since we were presented with the premise that our “hero” would escape all peril and save the day even though he was drinking and fornicating through most of the picture. Still, as a kid, I didn’t worry too much about these issues, and enjoyed the films for the action and gadgetry. 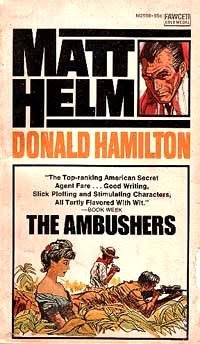 In college, I took to reading the James Bond novels and was struck by how different they were from the movies. I knew the Matt Helm books had to be light years away from the movies, and after reading The Silencers, I was proven correct. Although all four Matt Helm movies borrowed characters and plot points from the novels, the elements were shaken vigorously with several shots of scotch and a dash of absurdity to create the final scripts. It’s a shame too, because the literary Matt Helm was about as tough a spy as you will find. He was, in fact, a government assassin who, while not entirely lacking in humanity, kept it well hidden while on the job. Think Lee Marvin rather than Dean Martin.


While I’m still trying to collect and read all the Matt Helm novels, I still have a warm spot in my heart for the Matt Helm movies. I even bought them all on VHS, then again on DVD. And when Sideshow Toys started putting out their James Bond action figures, I kept longing for a Matt Helm figure. I wanted a nice rendering of Dean Martin as Matt Helm standing between my Sean Connery and Pierce Brosnan James Bonds. Of course, Sideshow would see no strong bottom line in such a creation, so I had to make my own. 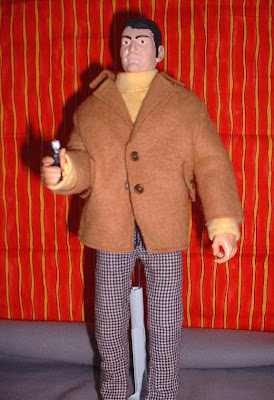 The big issue was the headsculpt. Where would I find a head that looked like Dean Martin? My answer came while I was flipping through my book on Marx action figures. Marx made a Best of the West figure called Sheriff Garrett and, for reasons lost in the sands of time, created him to look exactly like Dean Martin with a moustache. The likeness was uncanny. I quickly went into eBay mode and finally won a vintage Sheriff Garrett figure. Once I had it, I repainted the head to cover over the moustache and change the gray hair to black. I used a skin tone to match the hands, but I’ve never been satisfied with it since it’s very pale. Dino had a darker complexion than my figure, but it works okay. The outfit was relatively easy, since the movie Matt Helm was partial to turtlenecks. I put him in a yellow one like in The Silencers, and used some mod checked paints from an old Ken doll. I couldn’t get a jacket that matched the suede one in The Silencers, but this mod tan jacket works pretty well. I’m still looking for new clothes to make a version that will look exactly like one of his outfits in the movies. 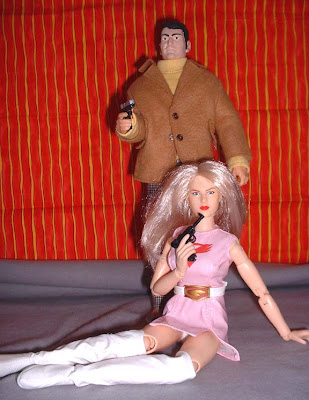 THIS IS LIKE SO DINOCOOL! WONDER WHO THE CHICK DOLL MIGHT BE?? WOW...AN ACTION FIGURE MATT HELM...I KNOW YOU PALLIE ARE PROBABLY WANTING TO GET YOUR HANDS ON ONE OF THESE! DINOGAL

Matt Helm was a spoof but there was also "Get Smart" that was also a spoof starring Don Adams.

I think that the spoof can be great entertainment. Spy films can be spoofed too!

I also think that the Moore - James Bond films spoofed themselves in a way.

Hey pallie Glenn, thanks for the Dinopatter...no one does spoofs likes our Dino..and I am so Dinodesirin' one of those Dinofigures under my Dinowintertree...so likes d'ya think you'll be gettin' the Matt Helm flicks in your stockin' this Dinowinterday?