Martin and Lewis at the 500 Club 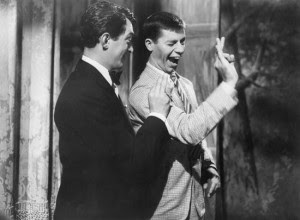 Hey pallies, loves to find great stories of our Dino in other's blogs and pass 'em on to all my Dinoholic pallies. Here's a great piece of Dinohistory...our Dino and the kid's debut at 500 Club in AC from Tom Metzger's blog Owning The Stage. I love this dude's insights in what made our Dino and the kid so successful....their playfulness and their ability to play to each other and not the audience....traits that our Dino continued to use in his solo career which made him even more successful and beloved then when part of Martin and Lewis. Hopes all you pallies loves this Dinoprose as much as me. As per usual, if you wanna read this in it's original Dinoformat, likes just click on the tagg of this Dinopost. Dinodelightedly, DMP


Dec 12 Martin and Lewis at the 500 Club
Tom Metzger in On Stage
Kari brought this snippet of an article about Dean Martin and Jerry Lewis to my attention today:

Martin and Lewis’ official debut together occurred at Atlantic City’s 500 Club on July 24, 1946, and they were not well received. The owner, Skinny D’Amato, warned them that if they did not come up with a better act for their second show later that night, they would be fired. Huddling together in the alley behind the club, Lewis and Martin agreed to “go for broke”, to throw out the pre-scripted gags and to improvise. Dean sang and Jerry came out dressed as a busboy, dropping plates and making a shambles of both Martin’s performance and the club’s sense of decorum. They did slapstick, reeled off old vaudeville jokes, and did whatever else popped into their heads at the moment. This time, the audience doubled over in laughter. This success led to a series of well-paying engagements on the Eastern seaboard, culminating in a triumphant run at New York’s Copacabana. Patrons were convulsed by the act, which consisted primarily of Lewis interrupting and heckling Martin while he was trying to sing, and ultimately the two of them chasing each other around the stage and having as much fun as possible. The secret, both said, is that they essentially ignored the audience and played to one another.

It’s great to have a window into the past, to see how two iconic performers pulled success out of the jaws of failure by changing their plan! The article doesn’t say what their original, uninspiring act was like, but it’s easy to see why the new plan would be so entertaining. It paints a picture of a very playful and un-self-conscious duo, creating an atmosphere that violated the usual assumptions and boundaries of stage performance at a club like the 500 club. It was new and different, and it woke people up!

One of the most interesting things to me is that they “essentially ignored the audience.” As Stanislavski would say, they set their focus of attention on each other. It can be very powerful to paint a scene for the audience to observe, instead of engaging in a direct conversation with them. In today’s world, TV has trained people to be very adept passive observers. Sometimes they can even be uncomfortable if you look at them too long from the stage! That’s a sad comment about our times (in my humble opinion) but you may as well accept the fact, and make use of it.

The new and improved Martin and Lewis act also had the hallmarks of improvisation and play. They relied on their instincts and basically did whatever they thought of in the moment! That kind of plan really lets you listen to the audience and engage in a back-and-forth conversation. So in spite of what I said earlier, the “passive observers” are providing half of the conversation just by their reactions and their energy. Can you imagine Martin and Lewis trying to pre-record their new act without an audience? Impossible.
Posted by dino martin peters at 6:18 AM

Hey pallie DMP. I always thought it would be cool to have seen Dino and the Jer at the 500 Club all those years ago. Cheers!

Hey pallie Keith, I agree, but thens I woulda do anythin' to see our Dino anywhere....

Great post Pallie - that is what I love about this blog - I can come over and get my Dean Martin fix.

I wish there were still night clubs like this around today.

Hey pallie Glenn, I does tries my Dinobest to help keep all my Dinoholic pallies well supplied with more and more Dino....calls it true Dinopalliedom...