Hey pallies, likes 'nother Labor Day  Weekend has come and gone,  and for those of us that are deeply deeply devoted to our most most beloved Dino, that means passionately  pausin' and reverently  rememberin' one of the greatest moments of supreme surprise and deepest delight in the life, times, and teachin's of our Dino.  For it was forty-three  years ago on this past  weekend in the year of our Dino 1976, September 5 to be precise, that Mr. Frank Sinatra did what we consider to be his greatest deed and was the catalyst to reunite our Dino with his former partner in comedy Mr. Jerry Lewis durin' the MDA's annual telethon from 'Vegas baby 'Vegas.

Today in deep, pure, and true homage of our Dino and this hugely  historic moment, we share with all youse Dino-philes some precious poses of our Dino and Mr. Lewis together after 20 years of separation.  The looks of love and affection between these two men is powerfully palpable.  And, likes of course we share with you the youtube vid clip that captures that monumental moment for eternity.  Likes every time we view it, it brings such happiness to our hearts to see our King of Cool reunite with the person who always has and always will know him better then anyone else.

We gets perfectly pure pleasure in seein' our Dino swankly saunter out onto the stage, ever present Kent cigarette in hand with that hugest of huge Dino-buddha-grin on his face and see Mr. Jerry Lewis emotionally  embrace him as he approaches.  Seein' these two men show such awesome affection for each other brings a rapturous response from our hearts each and every time we views it!  And to hear the powerful patter between 'em, of course, totally unrehearsed, takes us back to the days when they ruled the world of comedy together.

So on this 43rd anniversary of the reunitin' of our most beloved Dino and his most beloved partner Mr. Jerry Lewis, we invite you likes to take some time to view these  precious poses and the deeply movin' moments captured on video that record this hour of history when our Dino and Mr. Jerry Lewis appeared together once 'gain. 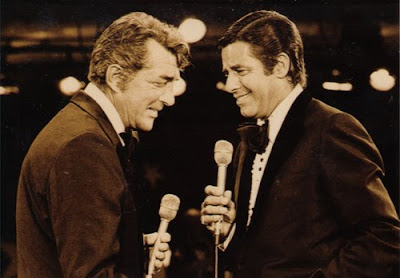 Posted by dino martin peters at 11:00 AM

A wonderful day! I was watching the telethon live at that moment.

Hey pallie, likes Miss AOW, we have long admired that fact that you saw this most memorable moment in all of Dino-history while it was in the makin! Keeps lovin' our mighty marvelous majestic DINO!