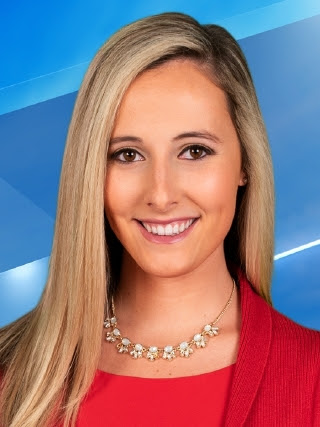 Hey pallies, likes it's the seventh day of our on-goin' marvelous month long celebration of the 102 anniversary of our most beloved Dino's descent to earth, what we tag 'round these Dino-parts as the Day That Coolness Came To Earth, June 7, 1917.  Well pallies Dino-fest 2019 in our Dino's hometown of Steubenville, Ohio is now history.

Likes  through the wonders of technology we are totally totally thrilled this very Dino-day to be able to share  with all youse  Dino-philes that weren't able to pilgrimage to Stu-ville last weekend (that includes we) some marvelous moments captured live from this year's Dino-celebration courtesy of the pallies at WTOV 9, Stu-ville's FOX televison affiliate.

News Anchor Mr. Rich Pierce introduces their "TOP STORY" featurin' reporter Miss Julianna Furfari (pictured on the right) live at the awesome action at the Spot Bar.  This powerfully potent piece includes wonderful  words of Dino-devotion by Spot Bar owner Mr. Jojo Dialbert, who has played host to Dino-fest over the years.  Also sharin' their on camera  awesome adulation of our most most beloved Dino is Mr. Mike Wiggins "who has been traveling from Lansing, Michigan to Steubenville for the event since 2000."

Mike is truly truly a Dino-holic's Dino-holic and likes  it sweetly sincerely wonderfully warms our Dino-heart to see him speak so openly and affirmatively 'bout our great great man.  Wiggins proudly proclaims, “Dean Martin was one of America’s beloved entertainers. He was probably the only artist, the very few, who had a hit tv show, a hit record, and hit movie all out at the same time, and he is one of the original Beatle Busters when ‘Everybody Loves Somebody’ went number one and knocked Beatles out of first place,”

We here at ilovedinomartin swankly salutes Mr. Rich Pierce, Miss Julianna Furfari, and all the pallies at WTOV 9 for sharin' this magical moments from Dino-fest 2019.  Keen kudos to Spot Bar owner Mr. Jojo Dialbert, pallie Mr. Mike Wiggins and all the Dino-devotees that gathered in Stu-ville for this yearly hugest of huge homage of our marvelous magical mighty Dino.

To checks this out in it's original format, and to view the vid if it don't work here at our Dino-pad, simply clicks on the tag of this Dino-report.


Dean Martin Fest brings fans from all over

JEFFERSON COUNTY, Ohio — "We don’t have talent like that anymore. How many people do you see now-a-days who do music, movies, and tv all at once? You don’t. No one can do it quite like Dino,” said long-time attendee, Mike Wiggins.

The festival that rolls around once a year honors the life of a Steubenville legend. It’s an event over 20-years-old that brings Dean Martin fans from all over the country back to his hometown in downtown Steubenville.

"The history of this event started 102 years ago when Dean Martin was born. We just took it and ran with it, and have been doing it 22 years,” said owner of Spot Bar, Jojo Dialbert.

The event, which runs from Thursday to Saturday night has some loyal fans. Including Wiggins who has been traveling from Lansing, Michigan to Steubenville for the event since 2000.

“Sometimes I come by myself, other times a friend comes from Lansing. We just have one thing in common. Dean Martin,” said Wiggins. “We get together every year and just have a ball. And that’s what it is all about, and that’s what makes this festival what it’s all about.”

For Wiggins and so many others, the festival is about honoring a man who made an impact on fans throughout the world,

“Dean Martin was one of America’s beloved entertainers. He was probably the only artist, the very few, who had a hit tv show, a hit record, and hit movie all out at the same time, and he is one of the original Beatle Busters when ‘Everybody Loves Somebody’ went number one and knocked Beatles out of first place,” said Wiggins.

Saturday the events continue with a run, a car cruise, and fun for all ages.

“First of all, it’s only once a year so if you miss it you’ve got to wait a year,” said Dialbert. “It’s a great event, everyone enjoys it, and if you miss it, shame on you.”
Posted by dino martin peters at 7:33 AM

What a wonderful man who is keeping the Dean Martin flame going stronger than ever. It is wonderful to see Jojo Dialbert and Mike Wiggins doing their part to keep Dean Martin front and center. A wonderful post DMP!

Hey pallie, likes Scotty-o, thanks man for your Dino-efforts as well in showin' the world your cool cool commitment to hugely homagin' our daddy-o of daddy-os...our one, our only DINO! Keeps lovin' our main man!