I love Dean Martin. I grew up with Dean Martin music. He has just on the most beautiful voices. 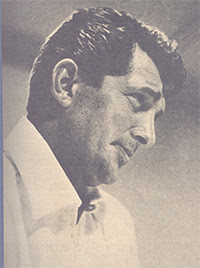 Hey pallies, likes it is the eighteenth day of our jumpin' June long celebration of what we tag here, the Day That Coolness Came To Earth...reverently rememberin' our most beloved Dino's birth in Steubenville, Ohio on June 7, 1917.  Likes we are purely pleased to be back one more day with deep deep Dino-reportin' from Dino-fest 2019 in our Dino's hometown.  Likes today we share more Dino-delight from the Stu-ville home rag, the "Herald-Star" with super scribin' from staff writer Mr. Mark Law

Mark made the scene on Friday night at the Spot Bar for all the Dino-happenin's  includin' just a ton of singin' of our Dino's cool cool croons.  Likes what we digs the mostest of the most is Mr. Law's relatin' of a variety of  Dino-devotees that have gathered 'round to share their primo passion for our one and only Dino.  A huge highlight of this prose that totally totally thrilled us is these wise words from Miss Diane Starr, who traveled with a trio of Dino-diggin' pallies from Buffalo, N.Y.  Quotin' Mark, "Starr said, 'We are all Dean Martin fans. How can you not be?'"

Likes doesn't Starr's deeply devoted Dino-thoughts brings the hugest of huge happiness to all your Dino-hearts?!?!?!?!  For all of us Dino-philes who weren't able to pilgrimage to Dino's hometown, we are greatly greatful to Mr. Mark Law and all the pallies at the "Herald-Star" for sharin' the Dino-action from the Spot Bar with us!  To checks this out at the "Herald-Star's" 'net pad simply clicks on the tag of this Dino-gram.

Crooning the night away at the Dean Martin Steubenville Hometown Celebration 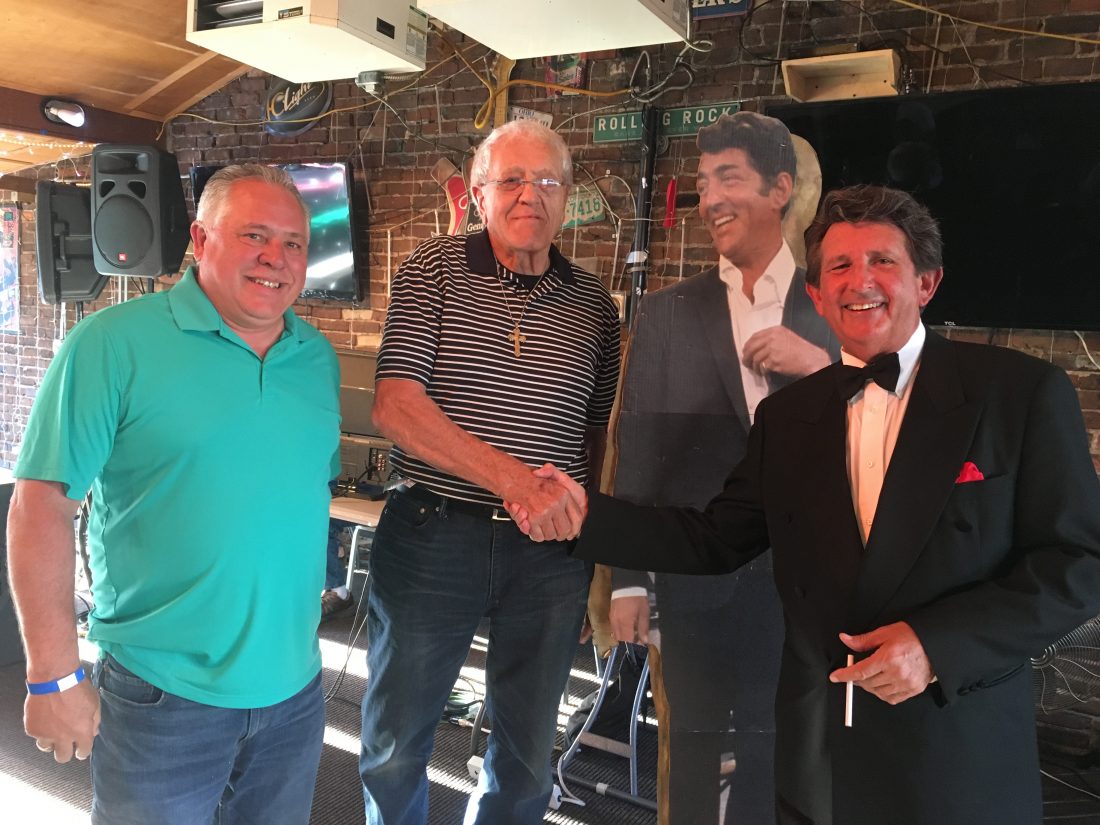 Mark Law EVERYBODY LOVES SOMEBODY — The Spot Bar was hopping Friday evening with lots of Dean Martin music. Scott Ackerman of Canton, left, and his father, Bill Ackerman, meet Bob Morelli, a Dean Martin impersonator, who was one of the performers. Scott said he brought his father down to the Dean Martin Steubenville Hometown Celebration as a Father’s Day gift.


The evening featured food and drinks and a lot of singing of some of Dean Martin’s best songs.

Scott Ackerman of Canton brought his father, Bill Ackerman, also of Canton, to the festival as a Father’s Day gift.

Bill Ackerman said he has been coming off and on to the festival for the past 15 years.

“It is a nice place to come. I love Dean Martin. I grew up with Dean Martin music. He has just on the most beautiful voices. It is music you could have a good time with,” he said.

The Ackermans were to meet up today with four friends from California.

Jo Jo DiAlbert, Spot Bar owner, said the bar has been hosting the festival for more than 20 years.

“The reason we do it is because it brings a lot of action to the city for three days,” he said. “I always see new people. Everyone has a good time and we feed off of that.”

DiAlbert said thousands of people come to the festival every year.

“People from all over the country and the world come. We still get a lot of locals, including Pittsburgh, Columbus, Akron and a lot from Florida,” he said.

Bob Morelli of Mount Lebanon, Pa., was at the Spot Bar to do a set of Dean Martin music, complete with tuxedo, bow tie and the signature cigarette in hand.

He said he started doing impersonations of Dean Martin in high school, when he made the morning announcements over the public address system. He started doing his Dean Martin act in 2001, mainly performing at Italian festivals, casinos, weddings and private parties.

Morelli said he wore out a reel-to-reel recorder in honing his Dean Martin voice.

Morelli’s scheduled performance Thursday at the fort amphitheater was postponed because of rain. It is rescheduled for Aug. 15.

As far as his favorite Martin song, he said it has to be, “Ain’t That a Kick in the Head.”

Steve and Jean Yeager traveled from Dayton for the festival. It was their first visit.

Steve Yeager said he read about the Dean Martin Festival five years ago, but couldn’t make it that year.

“It is always something I wanted to see. I have always been a big Dean Martin and Jerry Lewis fan,” he said.

His wife said she enjoys the music of the Martin era.

Steve Yeager said his favorite song is, “Everybody Loves Somebody.”

The Yeagers said they came in on Thursday, and have visited several places, including Historic Fort Steuben and the fort’s vistor’s center.

Iacono said she had read about the Dean Martin festival and decided to come.

“We travel a lot together,” she said.

Starr said, “We are all Dean Martin fans. How can you not be?”

The group said they took pictures of where Martin’s childhood home was located and the mural on the front of the Kroger store in the Hollywood City Center.

The Szyman family traveled to Steubenville from Los Angeles to attend a freshman orientation for their son, Patrick, at the Franciscan University of Steubenville.

Peter Szyman and his wife, Katie, and their son, William, all said they are big Dean Martin fans.

He said he wasn’t a big Martin fan until Martin’s death in 1995. He bought a Martin CD, loved it and kept in his car for a year listening to it time and time again. He also has been to Martin’s home and has wanted to meet Martin’s daughter, Deana, for years.
Posted by dino martin peters at 7:07 AM

SO great to hear everyone had a fun fun time...celebratin' our pals life! Seems like the festival is still goin' strong & will be for years to come! Hopefully long 'nough for us to get there!

Hey pallie, likes Danny-o, whatever action our most beloved Dino is in the center of...it's gotta be the coolest of the cool and the funnest of the fun! Keeps lovin' 'n sharin' our one, our only DINO!