.....we've got some boozy Dean Martin on the ol' turntable.

Hey pallies, likes man-o-man dudes are we over the top with the deepest of Dino-delight or what?
Through the marvelous magic of our pallies at Twingly Advanced Blog Search we recently landed at the new-to-ilovedinomartin awesome al-b-um and cool cocktail pad, "Vinyl In The Valley -
Flipping records and pouring cocktails since 2000-something!"  Hosted by a pallie who tags himelf Ned Tugent (we're guessin' a play on rocker Ted Nugent), "Tugent" introduces his swingin' site with these thoughts..."There's certain advantages to being an alcoholic shut-in! So kick back and relax... the turntable's on and the tiki bar is open!"

Likes in the month of March, "Ned" did a couple of Dino-centric posts and we are goin' to share 'em in order of their postin.'  This particular post accents "Tugent's"  randiest of randy review of our beloved Dino's amazin' al-b-um,"THE DOOR IS STILL OPEN TO MY HEART."  This reviewer shares his own insights into the style and songs on this al-b-um, some thrillin' 'n some chillin', but ends up potently proclaimin', "Honestly, there's not a bad song in the bunch!  Its a great LP for gathering around the record player, drink in hand and washing down the problems and realities of the working week."

We devotedly digs this pallies scribin' style and it is clear that he "gets Martin!"  And, what's not to like of this guy's includin' that swankly stellar still of our delightful Dino drink in hand, while readin' through the tome, "The Drinking Man's Diet."  We absolutely applaud this "Ned" pallies free and easily way of puttin' words to page....we would supremely surmise that he takes his lessons from none other then our King of Cool.

We sez our thank you very much to Mr. Ned Tugent for this really randy review of one of our Dino's swingin' sixties recordin's and puttin' his readership in the Dino-mood!  To checks this out in it's original source, likes simply clicks on the tag of this here Dino-message.


The door is still open to my heart... 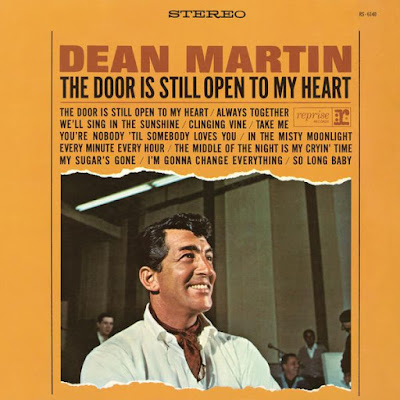 Its a boozy Saturday night here on Vinyl in the Valley and we've got some boozy Dean Martin on the ol' turntable.  Martinis be flowin'.

In the 50's and 60's, Dino had a sort of alter-ego in Dean "Tex" Martin where he would get away from the American Songbook-type standards and would instead croon some cowpoke-style tunes.

Now, this isn't stripped-down, shit-kickin', rural honky tonk music, but very lush, over-produced and orchestrated easy listening/lounge music.  The stuff your parents and/or grandparents (depending on your age) would put on their living room console turntables on a Saturday night while mixing highballs or pitchers of watered-down martinis. 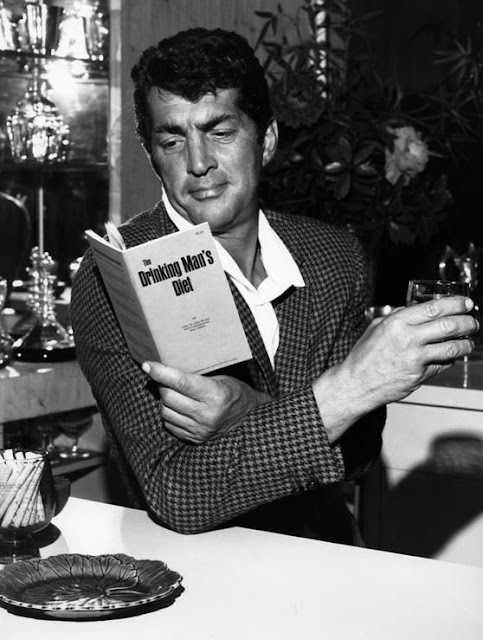 And watered-down is a pretty apt description of what's going on.

Not that its a bad record, by any means!  Sure its big on sentiment, but its all very safe, very saccharine, very uninspired.

Three songs from this record-- "I'm Gonna Change Everything", the Sheb Wooley-penned (yes, that Sheb Wooley) "The Middle of the Night is My Cryin' Time" & "My Sugar's Gone"-- were directly lifted Dean's 1963 record entitled Dean "Tex" Martin Rides Again.  #lazy.

The great title track and the song, "You're Nobody Until Somebody Loves You" were pretty big hits for Martin.  Other highlights include the cha-cha-shuffle of "In The Misty Moonlight" (originally written by Cindy Walker), the fantastically lush "Every Minute, Every Hour", the sappy "Always Together", the muted guitar work on "Take Me" and the epic kiss-off of a closer "So Long Baby".

Honestly, there's not a bad song in the bunch!  Its a great LP for gathering around the record player, drink in hand and washing down the problems and realities of the working week.  There's no due dates, or bills due, or tax forms, or clients, or traffic jams or yelling bosses.  Just you, your girl, a dimly-lit tiki bar and a half-empty bottle of rye whiskey!

One of my favorite LP's Pallie!!

Honestly, there's not a bad song in the bunch!

And the first Dino album I ever bought.

Hey pallie, likes Eddie-o, how Dino-special is that! Keeps lovin' 'n sharin' our most most beloved Dino!

Hey pallie, likes Miss AOW...swankly spoken by one in the Dino-know...thanks for remindin' us of your special Dino-attachment to this classic al-b-um! Keeps lovin' our most beloved Dino!