Hey pallies, likes we've been featurin' quite the number of Dino and Jerry posts as of late, and today we continue with a post that has been in draft format since we located it back in 2013.  Truth be told pallies, we currently have over 1400---count 'em---1400 draft posts....that's 'nough Dino-grams for several years even if we never ever found new Dino-devotion that we continue to uncover almost daily.

That said, today's Dino-message comes from the blog "Mr. Blog's Tepid Ride," and is tagged, "Dean Martin And Jerry Lewis: Old-School And OTR (Old Time Radio).  We begin by givin' you an 'lert that this particular post contains a number of errors in the tellin' of the story of our most beloved Dino and his most beloved partner, Mr. Jerry's Lewis relationship.  Likes, we invite you to read this through and see how many glarin' errors it contains...and through patter to let's us know what they are.

Also, this particular blogger clearly does not get the coolest of cool chemistry that our Dino and Mr. Lewis had in both their personal and professional lives as the greatest comedic team ever to walk the earth.  But, we guess, everyone is entitled to their Dino-opinion even when they can't get their Dino-facts straight.  Likes the one great thin' 'bout this post is at the end it includes a link to the 'net pad "Relic Radio" that includes a podcast  of the November 4, 1949 edition of The Martin And Lewis Show where our Dino and Mr. Lewis Try To Report A Murder.

Likes, 'gain send us some patter pallies 'bout the glarin' errors this Dino-post has from the pen of "Mr. Blog's Tepid Ride."  To checks this out in it's original source, likes clicks on the tag of this here Dino-gram.

Now: Jerry Lewis, icon to the French, former longtime host of the Muscular Dystrophy Telethon, movie star.
Then: Up and coming comic performing in small clubs, still developing his style. 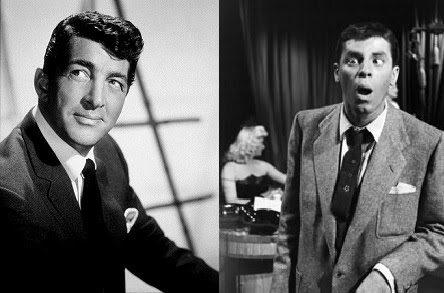 In the era of radio, with movies and Las Vegas far in their futures, Martin and Lewis had gone about as far as their careers were going to go. Martin back then was good but not great. Lewis’ act seemed to have reached a peak. Working separately, and in fact not even knowing each other, they were finding it harder and harder to find bookings. So one day, a nightclub owner decided to put together his two weak acts and see what they could come up with. That night, after just having met, they totally improvised an act that set the crowds to laughter and so a team was born.

In my mind, a weak team. I realize that they were an amazing popular radio act, lasting from 1949 to 1953. On the surface they were an Abbott and Costello style act: smooth straight man and childlike jokester. The problem was, Abbott and Costello had refined their act until they were a well oiled machine, doing classic and time tested vaudeville acts while Martin and Lewis were tossed together out of the blue. I always found their shows an uncomfortable fit. 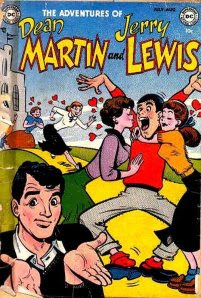 Even the cover of this comic knows they are a strange fit.

Often, shows would simply be Martin as an emcee, introducing guests and singing, while being interrupted by Lewis doing some kind of manic-moron act. Other times they would be thrust into some sitcom-like skit that served neither well as Martin was always apologizing for his sidekick, whom he invariably called a moron. So why were they together?

Their styles never meshed. Martin didn’t fit into Lewis’ style of wackiness and Lewis’ attempts to fit into Martin’s suave milieu were generally uncomfortable failures. In many shows,  it seemed as if Jerry Lewis was simply there to (badly) croon parodies of Dean Martin songs. (Ironically, it would be Lewis’ impersonation of Martin that propelled The Nutty Professor to huge box office numbers years later.)

But despite what I see as an awkward and ill-fitting pairing, the team did well, moving from TV to movies and always finding success. Eventually, as with Abbott and Costello, the Beatles, and the Soviet Union, they broke up. And is it an accident that after the break-up each went on to greater heights? Dean Martin found fame and fortune alongside Frank Sinatra on the Las Vegas stage, while Jerry Lewis continued to make movies and become a comedy icon. (For my money, The King of Comedy is his greatest role.)

So if there is a moral here I leave it for you to find. All I see is that you can never predict success. And a lot of people like Martin and Lewis more than I do. (One person who hates them both is Sammy Petrillo, but that is a blog for another time.)

Want to hear some episodes of The Martin and Lewis Show? Click on this link  (http://www.relicradio.com/otr/series/martin-and-lewis-show/) and listen to a few episodes at Relic Radio and while you are there, poke around a little. there is a ton of great stuff there.


Posted by dino martin peters at 7:18 AM

Well, for starters the contrasting differences between Martin & Lewis is the prerequisite for comedy teams (clown & straight man), so the whole point is, rather, pointless. It requires two extremely different personalities for comedy teams.

Martin & Lewis were the next level of comedy teams. It was useless to be Abbot & Costello 2.0, they pushed the envelope even further. Dino was more laid back than Abbot, and Jerry was more zany than Costello. An exact copy of Abbot & Costello they were not, or did they strive to be.

Next, Dino was still very young talent making his way up the ranks, doing it his way, on his own. Even Jerry noted how well put together Dino was when they first met, and it appeared that he had already 'made it". Not able to predict any future without Jerry, I think Dino would have made it to a moderate success singing without the "big break". That said, I think Dino would have made it to Hollywood star status on his own based on his pure talent package of singing, acting, good looks, sense of humor and timing, etc.. Too much talent to fail.

Jerry would probably would have had a tougher road to travel. He was/is generally unliked, and not many talents (like Dino) would have had the stamina and patience to prime Jerry enough to thrust him into a self-sustaining Hollywood career.

10 years of partnership is nothing to call an 'uncomfortable failure'. I do respect his opinion, I just think he's offbase a bit. Glad he took the time to put his efforts and energy to his blog.

Hey pallie, likes Eddie-o....boy are we glad that we decided to share this Dino-gram and that youse decided to take a chunk of your Dino-day to respond...swankly stated sir! In addition to all that you said, the scriber not only got the number of years that our Dino and Mr. Lewis were together, they also got wrong the how of how they teamed up 'mong other details. We are potently pleased for your dedication to our Dino and to speakin' the Dino-truth! Keeps lovin' 'n sharin' our one, our only Dino!

Yes true!
He was off on basic details, and I think he has a laymans opinion on the subject...kinda common amongst the common folk..