Hey pallies, likes the mighty marathon of Dino-posters is almost over dudes and we move on to Part 9 of the 10 Part series from the pallies at "ILLUSTRACTION GALLERY - ART THAT POPS."   Today we feature yet 'nother of the few flicks of our most beloved Dino that have yet to make it onto DVD, one of our Dino's early sixties sex farces, "Who's Been Sleeping In My Bed."

The palliesa t "ILLUSTRACTION GALLERY" have selected what we think musta be a lesser known promo poster, at least one we have never laid our eyes on before.   Below is "is a colorful Italian fotobusta poster," and likes we learned that fotobusta translates into English as "lobby card."  Once 'gain we have proof positive of the international acclaim that our Dino has a shinin' star of the silver screen!

Likes kudos once 'gain to the pallies at "ILLUSTRACTION GALLERY - ART THAT POPS" for their April celebration of  the Rat Pack accentin' our Dino in this ten part series of powerful promo posters.  To checks this out in it's original source, simply clicks on the tag of this here Dino-report.  And, likes stay tuned for part 10 on the morrow!   Dino-triumphantly, DMP 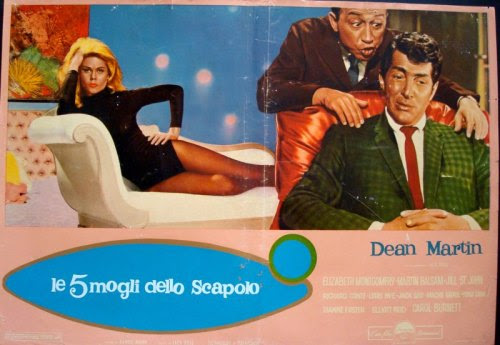 WHO’S BEEN SLEEPING IN MY BED? (1963) - DEAN MARTIN MOVIE POSTERS (Part 9/10)
Another romantic comedy directed by Daniel Mann in which DEAN MARTIN exudes effortless cool as a TV host hit by midlife crisis between his soon to be wife (Elizabeth Montgomery pre-Bewitched fame) and the sultry Jill St. John. Watch the dinner scene here
Above is a colorful italian fotobusta poster.
In April 2016 All our RAT PACK (Frank Sinatra, Dean Martin, Sammy Davis Jr…) posters are ON SALE Here
If you like this entry, check the other 9 parts of this week’s Blog as well as our Blog Archivesand all our NEW POSTERS
The poster above courtesy of ILLUSTRACTION GALLERY
Posted by dino martin peters at 7:23 AM

This seems like the perfect comedy role Dean, esp when you throw in the wonderful Jill St. John AND Elizabeth Montgomery into the mix. I am sure this is a great comedy role. Thank you DMP for bringing this gem our way!

Hey pallie, likes Scotty-o, this is 'nother Dino-flick that we can't wait to see gets to DVD, and likes as you sez with Miss Jill and Miss Elizabeth it's gotta be a great sex farce. Keeps lovin' 'n sharin' our most beloved Dino!