Hey pallies, likes stop the pressed dudes!  Likes we had planned to take only a couple of days break from our current 10---count 'em---10 part series on Dino-posters...for Danny G's Sunday Serenade With Dino and for yesterday's remembrance of On This Day In Dino-history:  April 25, 1973....the date of our Dino's third marriage to Miss Cathy Mae Hawn.

But likes yesterday in doin' some Dino-searchin' we discovered that our most loyal of loyal pallie Scotty-o had put up a powerfully potent Dino-post at his beau-ti-ful blog "BlueisKewl" after several weeks break 'cause of a recent move he had made.  So we just had to get his cool contribution of Dino-devotion up ASAP seein' how it is one of the very first thin's he has done since gettin' his 'puter back in action!

So, below are a couple of perfect poses of our most beloved Dino while playin' at the Sands Hotel in 'Vegas baby 'Vegas.  The first is of our main man with his main pallie Mr. Frank Sinatra, and the second is part of the same pose with only our Dino.  While we have posted the first impressive image of our Dino more than once here at ilovedinomartin, we don't ever remember knowin' that this coolest of cool candid was shot by none other then Mr. Sammy Davis, Jr.

We are totally totally thrilled to see our Scotty returnin' to active Dino-duty at his incredibly impressive blog and we thanks him mucho mucho much for his on-goin' awesome adulation of our Dino and helpin' his remarkable readership growin' deeper and truer in their deepest of deep devotion to our King of Cool.  Likes to checks this out in it's original source, simply clicks on the tag of this here Dino-report.  And, btw, we definitely do plan on returnin' to the rest of the 10 part series of Dino-posters on Wednesday.  Dino-delightedly, DMP


Dean Martin and Frank Sinatra at the Sands Hotel in Las Vegas, Nevada 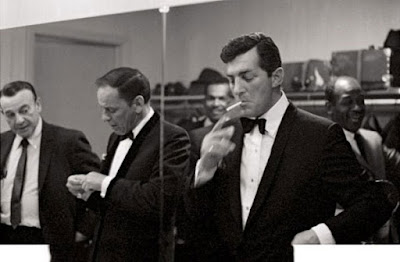 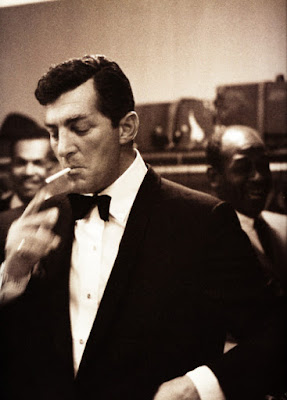 The Rat Pack was a group of actors originally centered on their leader, Humphrey Bogart, until his death in 1957. By the 1960s it was the name used by the press and the general public to refer to a later variation of the group that called itself "the Summit" or "the Clan," featuring Frank Sinatra, Dean Martin, Sammy Davis, Jr., Peter Lawford and Joey Bishop; they appeared together on stage and in films in the early 1960s, including the movies Ocean's 11, Sergeants 3, and Robin and the 7 Hoods (in the last film, Bing Crosby replaced Lawford). Sinatra, Martin, and Davis were regarded as the group's lead members.
Posted by dino martin peters at 7:08 AM

Thank you DMP and Danny G. for your continued support. I came across this posting of Dean and Frank taken by no less then fellow rat packer Sammy and was taken with the photograph. Even though i understand now it was a well known photograph it was new to me. I think it will take a life time of work to even begin to grasp there sheer volume of material of this legendary entertainer. A pursuit that i enjoy.

I hope everyone has a wonderful week!

Hey pallie, likes Scotty, we so so appreciate these wise wise words you have written..."I think it will take a life time of work to even begin to grasp there sheer volume of material of this legendary entertainer. A pursuit that i enjoy." This is the truth for any of us that desire to grow in knowin', lovin', and honorin' our most beloved Dino. Keeps lovin' 'n sharin' our most most beloved Dino!