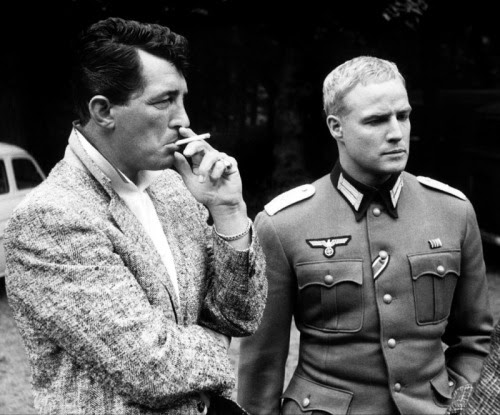 Hey pallies, likes today's time for some fessin' up folks.  Likes for years we have depended upon a Dino-resource tagged "The Dean Martin Timeline" for helpin' us remember important dates in the life, times, and teachin's of our Dino, but for some reason that original  resource is no longer on line...at least that we can find (but, we recently have just found a new source that we will share more 'bout in a latter Dino-gram.)

So for the past few months we have relied on reviewin' previous years posts each month to make sure that we share as many important Dino-dates as we can.  Well in this month of April we failed to do this Dino-deed 'til yesterday and we discovered that we missed a great great day of Dino-remembrance on April 2....last Saturday....so we are sharin' it with all youse Dino-philes today....a few days late....but likes better late then never!

So,  likes today we share the anniversary of yet 'nother incredibly important impactin' incident  in the life, times, and the teachin's of our most beloved Dino.  This particular date remarkably reflects on our Dino as teacher of wisdom extraordinaire!   More on that below.  First, let us note that likes it was on April 2,  in the year of our Dino 1958 that one of our great great man's greatest big screen efforts opened to absolutely  amazin'ly  awesome acclaim.

It was on this date that the war epic, "The Young Lions," opened to giganticly great  great reviews.  The flick was based on an Irwin Shaw novel, and it also starred big screen heavy weights  Marlon Brando and Montgomery Clift.  Our Dino's role as Michael Whiteacre was huge in establishin' him as tour de force on the big screen givin' him the respect that he so so richly deserved.  It was this remarkable role that established him as a serious  actor and opened many doors for him in the future includin' what many consider his greatest screen appearance as the Dude in "Rio Bravo."

In honor and remembrance of this important date in Dino-history, we share with you a copy of an original publicity poster, a purely powerful pix of our Dino on the set with Mr. Marlon Brando, the original trailer vid, and a clip from the film that features our Dino doin' a little croonin' and.........

Likes we couldn't remember for sure which Dino-interviews contained his remarkable retellin', but likes  as we went to youtube to search, we gotta 'fess up that likes we indeed felt very much directed by our Dino to this clip without much effort at all....a true trademark of our Dino's laid back style!  Startin' at 'bout 9:25 we hear our Dino's own words of how he got the part.....the famous story of Dino bein' willin' to take a huge pay cut to work with the likes of Marlon Brando and Montgomery Clift.

On the  58th anniversary of the opennin' of "The Young Lions," let  Dino-holics everywhere celebrate our Dino's success not only with this flick, but with all the fame and fortune that went before him for the rest of his remarkable life!  Dino-honorin' and rememberin', DMP 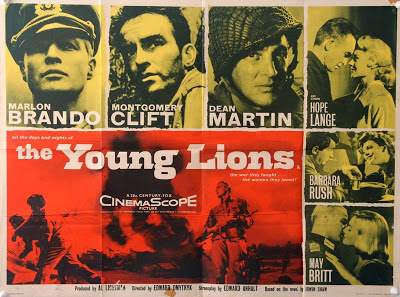 This was a great movie and one that i have seen a few times but it has been a long while since. I did not realize that DM was in this one and i will have to see this one again when i get my computer back up and running. I have to be honest and say i was very surprised and a bit embarrassed that Dean was a part of this classic movie and i did not know. I still have a very long way to go with regards to learning all about the amazing movies, t.v. shows and music that is Dean.

A great posting as always DMP!

Have a nice up coming weekend.

Hey pallie, likes Scotty, it really shows the strength of your character to 'fess up to this. Likes man, honestly Scotty-o, likes we all still have a very long way to go with regards to learning all about the amazing movies, t.v. shows and music that is Dean." That's why ilovedinomartin exists and why we stand ready, willin', and hopefully able to assist you in growin' ever deeper in our most beloved Dino! Keeps lovin' 'n sharin' our main man!