The ultimate menefreghista, as biographer Nick Tosches dubbed him: he didn’t care then and he certainly doesn’t on Nashville .

Hey pallies, likes we gotta 'fess up that likes we have been waitin' with bated breath  for more darin' 'n deep devotion to our Dino from our down under pallie Mr. Joshua Meggitt at his blog "...As Though The Shame Would Outlive Him."  Likes regular readers of ilovedinomartin will remember him as the awesome Aussie Dino-holic who coolly coolly celebrated the later years of our most beloved Dino's life, times, and teachin's with a  powerfully potent programme over Melbourne  Radio 3RRR FM's Max Headroom.

Meggitt accented what he tags the "lacklustre Dino, playing choice filler from his later albums, with excerpts from such cinematic highlights as The Cannonball Run 2."  You can read all 'bout that  HERE as well as follow the link to be able to listen to the remarkable recordin' of Joshua hour homage of our main man.

Well likes we have been checkin' back and back to his primo pad just wantin' for more Dino-adulation from Mr. Meggitt.  And, likes recently we were rewarded for our efforts when we discovered the followin' post below tagged "Flat Champagne: The Last Albums of the Rat Pack."
As you will note our pallie Joshua scribed this prose "for Triple R's The Trip, a subscriber only magazine issued in August.  (Triple R bein' the radio station that aired Meggitt's trib to our Dino.)

As Joshua's title suggests, he takes an in-depth look at the last record al-b-ums released by our Dino and his pallies Mr. Sammy Davis Jr. and Mr. Frank Sinatra.  Of course, we are most purely partial to Meggitt's patter on our Dino's "Nashville Sessions" disc.  Likes we coulda tells you all 'bout it, but we wants you to reads Joshua's remarkable reflections first hand.  Likes we do have one quire for him in that he mentions our "suicide attempts."  Likes we have no recollection of ever readin' anythin' 'bout our Dino or his fam referencin' such thoughts.

Likes, we are deeply delighted to be able to feature more Dino-reflections from our pallie-in-Dino Mr. Joshua Meggitt and shouts out our thank you very much for your on-goin' efforts in liftin' up our King of Cool.  To read this in it's original source, simply clicks on the tag of this here Dino-report.
Dino-always, ever, and only, DMP

Flat Champagne: The Last Albums of the Rat Pack 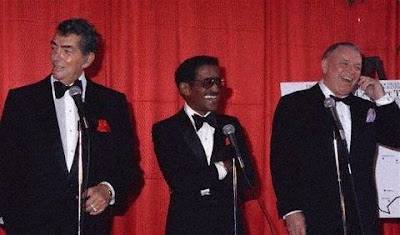 I wrote this for Triple R's The Trip, a subscriber only magazine issued in August.

Between 1982-84, Frank Sinatra, Dean Martin and Sammy Davis Jr, the core members of the Rat Pack, all released their final solo studio albums. Strange, patchy affairs, with two recorded in Nashville and the other adding electronics, they are incongruous blots at the end of generally esteemed careers. By 1982, they were hardly in their prime (Sinatra 67, Martin 65 and Davis Jr 57), and their boozy crooning and misogynist humour was not in vogue. Even the lounge revival, itself a disrespectful satire of their Vegas showbiz style, was a decade away.

Lured by money, contractual obligations, curiosity or boredom, all three returned to the studio, perhaps regrettably, for a last hurrah. For all their faults, each reflects – in a rather warped way - the history and personality of their star, and collectively they reveal a picture of the entertainment industry’s perception and treatment of faded glory. Let’s revisit these long forgotten (if ever considered) products and see if anything still sparkles. 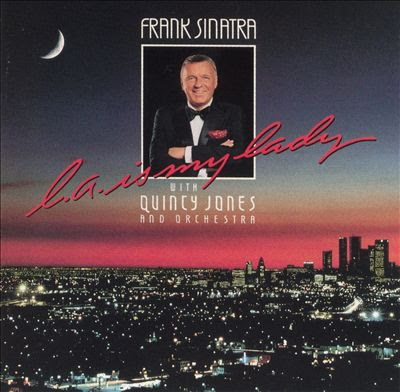 Frank Sinatra: LA Is My Lady (Qwest, 1984)
Sinatra’s final solo album (not counting Duets of 1993, or indeed 94’s Duets II) is the most respectable of the three, with by far the biggest budget, and corresponding effort, and is consequently the least interesting. Hardly surprising as his career had fewer outright lowlights than Dean or Sammy, and Sinatra, the consummate professional, seemed unable to do anything half hearted, or use irony (his appearance in The Canonball Run 2 excepted – note his body double in scenes with Burt Reynolds). It’s telling too that, of the three, only Sinatra strives to remain relevant and update his sound for the eighties: recruiting Quincy Jones, at his peak in 1984, and a huge cast of crack players, from George Benson to the Brecker Brothers. He also adds synthesizers, and on the title track, disco rhythms. These kitsch moments are amusing, but for the most part it’s just a bigger big band and a tired Frank. This is especially so on “How to Keep the Music Playing”, another disco number, which asks the wrong question and truly drags. The joy of LA Is My Lady however is in watching money and talent squandered, producing something dazzling but flat, smoke and mirrors, more coal than diamond. It was also released on video and featured Frank’s latest pallies, Eddie Van Halen, Donna Summer and David Lee Roth, broadcast on the fledgling MTV Network. As a final insult, LA is my Lady was recorded in New York . 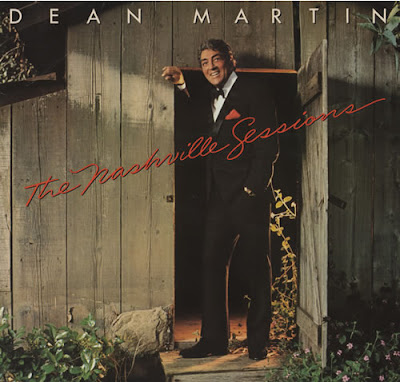 Dean Martin: The Nashville Sessions (Warner Brothers, 1983)
By 1983 Dino hadn’t released an album since 1978’s Once In A While, which was cobbled together from recordings from back in 1974. Like all of his seventies output, Once in a While was an ugly melange of 1930s Tin Pan Alley standards rendered in country-tinged pop-brass, with Dean swanning in at the last moment to overdub his vocal parts. The ultimate menefreghista, as biographer Nick Tosches dubbed him: he didn’t care then and he certainly doesn’t on Nashville . Dino had dabbled in country on a number of albums (Dino “Tex” Martin Rides Again, Country Style, Gentle On My Mind), not to mention dixieland (Way Out Yonder, Dino Goes Dixie, Southern Style); indeed, there was little he didn’t touch (French Style, Cha-Cha-Cha D’Amour, Sings Italian Love Songs, Dino Latino, countless Christmas albums). With The Nashville Sessions however, Dino dips more than a toe in the country pool: Merle Haggard joins him on “Everybody’s Had The Blues”, and Conway Twitty on “My First Country Song”.

At 65, and with a lifetime of booze, fags and indifference behind him, Dean’s voice has a weathered purr comparable to late Johnny Cash (Dino always, bafflingly, had a Southern drawl, despite being an Italian from Ohio), and few seem as comfortable fronting such studio froth (his TV career was sodden with canned laughter). Opener “Old Bones” is a highlight, a loping self-pitying ballad about ageing featuring the line “I love life I’d like to do it again”. This rings particularly hollow given Dino’s addiction to painkillers, suicide attempts and almost violent misanthropy. “Drinking Champagne ” is more accurate: “I’m drinking champagne, and feeling no pain, ‘til early morning”. The pace never quickens from slurred ballad crawl, with “Shoulder to Shoulder” and “In Love Up To My Heart” both particularly narcoleptic, cloaked in anodyne female backing (a Dino trademark). The Nashville Sessions also features Dean’s only music video, produced by his son Ricci, “Since I Met You Baby”: tuxedoed Dino, glassy eyed and lost amidst sequences of swimsuited eighties ladies, palm trees and cheap video effects. Prime fodder for sampling chill wave hypnagogues but, alas, The Nashville Sessions has so far eluded the modern hipster’s retro grasp. 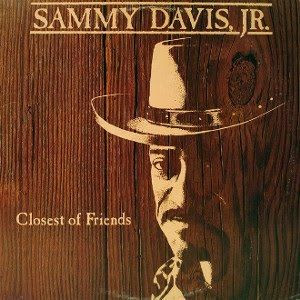 Sammy Davis Jr: The Closest of Friends (Applause, 1982)
Recorded in Nashville, hardly the logical musical resting place of Sammy Davis Jr, The Closest of Friends (also known as Sings Country Classics) is among the most strangely poignant of final albums. With material penned by the city’s country finest (Don Gibson, Kris Kristofferson, Merle Travis), yet cheaply recorded with plastic keyboards and hokey arrangements, it pits Sammy’s still impressive croon (he was the youngest of the three) against cold industry indifference and musical mediocrity. This was a context Dino seemed drawn to, even thrive in, but Sammy comes off second best. “Smoke Smoke Smoke That Cigarette” is pleasingly macabre, opening to Sammy’s wheeze before he boasts “I’ve smoked all my life and I ‘aint dead yet” (he would be, by throat cancer, in 1990). Sammy is on decent form throughout, but it’s a struggle: through ill-fitting flange guitar gospel (“Come Sundown”), wayward Casio runs (“Mention a Mansion) and awkward lyrics ("Hey, Won't You Play (Another Somebody Done Somebody Wrong Song)". The standout however goes to “(We Could Have Been) The Closest of Friends”, which reads like a heartfelt plea to his more famous and accepted white Rat Packers, his musical colleagues in Nashville, and even his audience. As with Martin’s late work, there is something perversely endearing in the loveless product that is The Closest of Friends, but this scrapes a barrel lower than Dean ever did, with Sammy reluctantly forced to eat what he’s served. As testament to the industry’s enduring disrespect for Sammy Davis Jr, The Closest of Friends is among his most frequently reissued albums, generally with misleading album title and artwork.

Sammy was the first to go, aged 64 (damned cigarettes!), with Dean following in 1995 (fittingly on Christmas Day, aged 78) and Frank making it to 82 in 1998. All joined forces, briefly, in 1988 for a railroad-stadium reunion tour, but Martin bailed early, to be replaced by Liza Minelli. Aside from Frank’s stocking filler Duets albums they recorded nothing more. Out with a whimper, like flat champagne, but one with a strange, lingering aftertaste that may just grow on you.

Well pals...what can I say? I guess Mr. Meggitt has the right to his opinion. Don't know much 'bout Frank & Sam's al b ums...but...I, for one, REALLY dug The Nashville Sessions! It's an older...laid back Dean...but it's still Dean! Since I met You Baby is a GREAT GREAT jam & vid!!! But, like I said...he has the right to his opinion. I guess...haha!!

Dino always, bafflingly, had a Southern drawl, despite being an Italian from Ohio

I never could figure out why our Dino had such a drawl -- unless the reason was the Steubenville is so close to West Virginia. Our Dino probably spent a lot of time in West Virginia, just across the river from Steubenville.

DMP,
I had never heard that before!

Always something new to discover about our Dino.

Hey pallie, likes Miss AOW, sorry that we ain't rememberin' where we read it..if we find it 'gain we will remember to share it. Indeed ma'am this truly truly is as you sez, "Always something new to discover about our Dino." No matter how long we study 'n search the life, times, and teachin's of our Dino, there will always always be more and more for our Dino-discovery! Keeps lovin' our most beloved Dino!