Hey pallies, likes  we finally returnin' once 'gain earnestly eager to share some more powerful patter from the pen of Mr. John McElwee over at his self tagged blog  "John McElwee's GREENBRIAR Picture Shows." Likes today we have 'nother look at 'nother of the Martin and Lewis classic flicks from the venerable view of Mr. McElwee.  This time 'round John truly truly shows off his keen knowledge of Dino-flicks with his post "Wallis Fiddles While 3-D Burns."

Likes, while this post doesn't have much to say directly 'bout our most beloved Dino or Dino's most beloved partner, Mr. Jerry Lewis, McElwee's potent prose is chocked full of details 'bout the producin' of "Money From Home" the only Martin and Lewis epic to be filmed in 3-D and the first to be featured in Technicolor.  For those of us Dino-holics who can never ever get 'nough details of our Dino and his work, John's remarkable reflections are a fantastic feast to be energetically  enjoyed.

John shares incredible insights to all the behind the scenes activity of producer Hal Wallis had on this
1953 cool caper that didn't reach wide release until 1954.  Read John's wise words to find out why.
Once 'gain, Mr. John McElwee has crafted a well written and researched post that we for one have gleaned quite a number of Dino-details from.

We shouts out our heart-felt hurrah!  to Mr. John McElwee for helpin' all of us grow in learnin' more and more of the Dino-story.  To checks this out in it's original source, per usual, simply clicks on the tag of this Dino-message.   Dino-studyin', DMP

Patronage To Paramount: Lay Those Glasses Down!
Hal Wallis produced Money From Home on 100% independent basis, then dangled result before an eager Paramount, that company having up to then part-financed and split profits with HW and partner Joseph Hazen. The pact had sustained from wartime sign-up through over a dozen features, but it was Wallis/Hazen that had Dean and Jerry's contract, not. The latter having no stake in Money From Home meant they had to vie with other distribs to handle gold brick this one was reckoned to be. Martin and Lewis were meanwhile flying their own indie colors, The Caddy a break from Wallis oversee and done for the team's own York Productions.Money From Home had been finished on May 1, 1953, a peak period for 3-D enthusiasm, but Wallis would dawdle months for a best distribution deal based on twin lures of the process and first-ever Technicolor to showcase M&L. Bloom came off the 3-D rose during eight month interim between Money From Home's completion and belated release. Customers had meantime got sick to death of depth and were by fourth quarter '53 ducking it for fresher Cinemascope.  had Miss Sadie Thompsonset for year end release and let theatres decide yea or nay on 3-D. ,  saw Sadie play depthand flat in venues split between the formats, while's Goldman Theatre dropped the 3-D after one day and polling among patrons that indicated "overwhelming reaction ... in favor of flat presentation" (Variety).
To this conflicted market, then, came Money From Home. , having done a deal with Wallis/Hazen, announced a nationwide Preview for New Year's Eve 1953 at 322 theatres. The strategy had been used twice before for new Martin-Lewis shows. expressed "hopes to have the complete print order working at the special midnight shows," but there was the rub, for Technicolor labs would have to generate 644 prints in total, a left and right for each of the 322 houses playingMoney From Home. 3-D aspect of the plan did not come off, due to Technicolor's inability to supply dual prints by December 31 deadline. The previews consequently played flat, with general release announced for February 4, 1954. Paramount distribution chief Al Schwalberg added that Money From Home, originally slated as 3-D only for key dates, would instead be available "in standard form" should showmen prefer it. Most would. 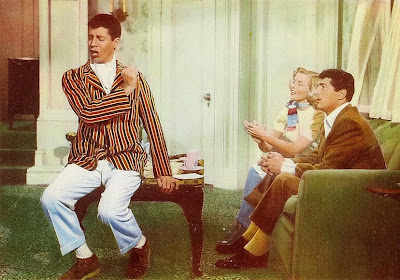 England got "strong attraction" Money From Homeahead of the US for early January at the London Plaza, but trades did not indicate 3-D for that booking. February stateside dates tilted toward flat, and  passing on the glasses, while  and  stayed with specs., in fact, played Money From Home on a double-bill with Jivaro, another Paramount release (via the Pine-Thomas unit) that was made in 3-D, but shorn of the process for its  play-off. Audiences didn't mind, the combo bringing "a sock $28,000" for opener week.  by way of salvage dropped its surcharge on eyewear handed out to Money From Home customers, Film Bulletin(3/8/54) crediting the company for being first "to come to its senses on this subject."  for percentage of 3-D glasses sales was a good will gesture coming too little/too late ... Money From Home ran 3-D in only 356 theatres, from which $357,910 returned in domestic rentals, while the flat version went out for 17,220 bookings, these earning $2.857 million. MFH has since played at several 3-D revivals, and there is a DVD (2-D and full frame) from Legend Films.