My guess is that Dean Martin cooperated better

Hey pallies, likes fast-forward seven years from yesterday's 2006 patter on the Dino-western "4 For Texas" from Mr. John McElwee at"John McElwee's GREENBRIAR Picture Shows."   Likes if you perused yesterday's Dino-thoughts from McElwee you will remember that he wasn't much smitten by this silver screen offering.

Well, today we share John's ponderin's seven years latter in 2013 and he sez, "hanged if this scruffy spoof isn't starting to grow on me."  In speakin' his mine, per usual, McElwee is most most kind to our most beloved Dino when he reflects "My guess is that Dean Martin cooperated better."  His referenece is to our Dino bein' more cooperative then his Rat Pack pallie Mr. Frank Sinatra.

This entry is on the short side sans any glorious poses of our main man, but likes how coulda we share one "4 For Texas" entry without the other?!?!?!?  Likes for the time bein', this will be our last entry from our Dino-addicted pallie Mr. John McElwee, and we thank him for the many many Dino-offerin's that we have shared over the course of the last couple of weeks or so...doin' mucho much to lift up the life, times, and teachin's of our one and only Dino!  To checks this out in it's original source, simply clicks on the tag of this Dino-message.   Dino-reportin', DMP 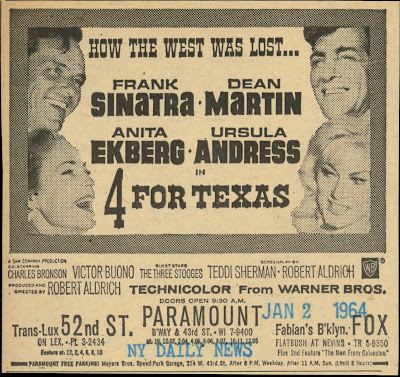 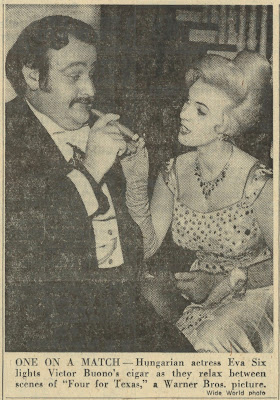 This could have been another really good Robert Aldrich movie, an outcome frustrated by Frank Sinatra (Aldrich said as much in interviews). Sinatra had no patience with projects he didn't respect, and doled his time to a point where footage with him diminished during Four's second half. This was an HD Texasrevisit after six years, the last GPS encounter here, and hanged if this scruffy spoof isn't starting to grow on me. There's more in speculation on what happened behind-scenes than interest in action we see. My guess is that Dean Martin cooperated betterwith Aldrich because he liked westerns and wanted to be in a good one, a goal Frank made impossible to fulfill. A secondary cast is peppered with Aldrich regulars --- I wanted Ralph Meeker to stop in so that Kiss Me Deadly's reunion would be complete. I'm embarrassed for Sinatra when he (and larger double) engage fisticuffs with Dean, it obvious to a child that the latter could handily beat tar out of the former. For all Frank's frustration with Martin on and off Rat Pack stage, do you suppose he ever dared getting in the larger man's face? (given Sinatra's comparative runt stature, I certainly wouldn't have) Four (or 4)For Texas looks vivid in HD --- you can count beads of sweat on portly Vic Buono's forehead.
Posted by dino martin peters at 7:03 AM

Well...I gots to hand it to Mr. McElwee...he did spend A LOT O TIME with these cool cool reviews! Great job pallie!

Hey pallie, likes we couldn't 'gree with youse more. McElwee's patter when we did our first Dino-postin' of his reviews is very tellin. Don't know if you remember it. John scribed, "Very pleased to be mentioned at your wonderful Dino pad, and flattered to know you like Greenbriar's take on our "Main Man." Dean Martin forever!" Indeed Dino Forever! So, it's onward and upward in our quest of liftin' up the life, times, and teachin's of our most beloved Dino! Keeps diggin', lovin', and sharin' our main man!

A very interesting read and a man that seems to know what he is talking about. There is nothing better then getting a behind the scene look in what really is going on, the good, bad and the ugly. It would seem to me that Dino enjoyed westerns and he seemed to be so natural in them which makes such a difference in any picture. It would seem that Frank brought down the production in this which is a shame of course. I am guessing he was difficult to work with in general. That's Hollywood for you.

Thank you for this behind the scene gem my friend!

Hey pallie, likes Scotty-o, indeed Mr. John McElwee seems to know tons 'bout the silver screen in general, and our most beloved Dino in specifics. Thanks ever so much for your all your Dino-devotion shared here at ilovedinomartin! You are simply the best Scotty! Keeps lovin' keeps sharin' our most beloved Dino!