Hey pallies, likes once 'gain we gets the deep deep delight of payin' 'nother visit with our Dino-devoted pallie Mr. John McElwee over at his self tagged blog, "John McElwee's GREENBRIAR Picture Shows."  Today John will share with us his rewardin' reflections 'bout the Dino-flick that never got to the big screen 'cause it never got finished.  Likes, of course, we are speakin' of the ultimate sex farce "Something's Gotta Give" that starred our most beloved Dino with none other then Miss Marilyn Monroe.

John gives a great behind-the-scenes report of this most anticipated silver screen project which 20th Century Fox removed Miss Marilyn from and our gallant gentleman Dino refused to finish with our Miss Monroe.  McElwee keeps this mostly Marilyn focused, but we have chosen to share it here for a couple of Dino-reasons.  First, John reverently remembers our Dino's awesome action of great kindness toward his co-star, and second, he shares a quartet of powerfully potent pixs of our Dino makin' the scene with Monroe....hotter then hot in our Dino-perspective.

We salute Mr. John McElwee for sharin' more important moments in the life, times, and teachin's of our one and only Dino.....remindin' all of us Dino-holics of what a laudable, loyal, and faithful friend he was to Miss Marilyn Monroe.  To checks this out in it's original source, simply clicks on the tag of this here Dino-report.  Dino-devotedly, DMP 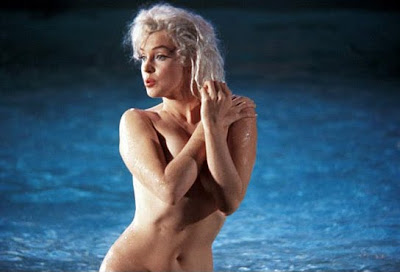 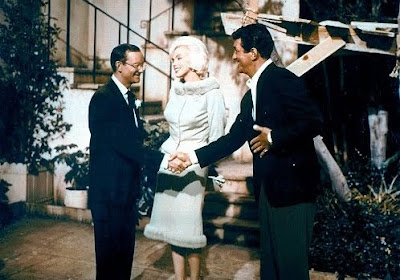 
Just a few notes about Something’s Got To Give before I leave poor Marilyn alone. This may be the most famous unfinished movie ever not quite made, with public awareness going all the back to when Fox cobbled a feature tribute called Marilyn in 1962, hosted by Rock Hudson, which included pieces of SGTG. There was hunger for Monroe footage right from her death. A lot of odd stuff was preserved that would have otherwise gone into dumpsters. A DVD documentary produced by 20th shows a vault bulging with hours of Something’s Got To Give. They’d kept this even as three-strip negatives from the studio’s Technicolor inventory were being dumped. Film history would better have been served had it been the other way around. The DVD has a first-ever assembly of those scenes more or less completed in 1962. What survives is tired comedy anticipating a Dark Age of Doris Day vehicles to come.Something’s Got To Give was in fact revisited and ultimately completed with Day in Marilyn’s part. The remnants landed in 1963 and was called Move Over, Darling. Fox would lose $$ on that one after Doris Day’s participation money came off. Some projects are just doomed no matter what. Monroe’s apparent refusal to finish Something’s Got To Give might have been a matter of knowing what a poor specimen it was and misbehaving in hopes Fox would give up and shut down. She always was perceptive enough to know good comedy from bad. Billy Wilder acknowledged Monroe’s instinct for spotting laughs in given scenes and playing to a best realization of same. Based on the forty or so minutes we have ofSomething’s Got To Give, there was no mirth there to mine. Dean Martin famously refused to complete the shoot after Marilyn dropped out and Fox signed Lee Remick to pinch-hit. He probably realized that without Monroe, SGTG had no chance. 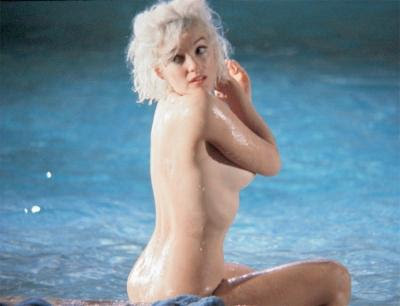 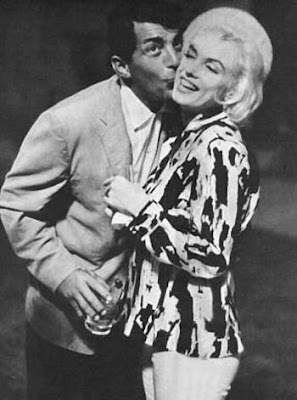 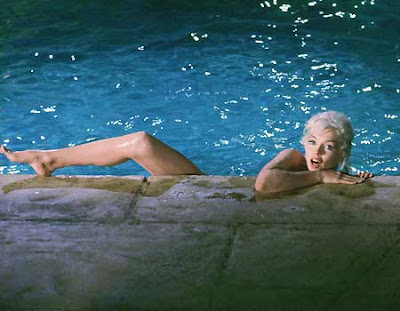 Of Marilyn’s truancies during production, the worst was cutting out for Washington and Jack Kennedy’s birthday party. She could always manage miraculous recovery for events like this. A surviving kinescope is among the spookiest chunks of film ever recorded, almost like a warm-up for the Zapruder footage. The ballroom looks stadium sized. What faces we detect are ghostly blurs, and there are oceans of them. Laughter is distant as if summoned from beyond. Host Peter Lawford might be death itself holding a sickle. Marilyn enters (late) in wrath-like white and barely manages her rendition ofHappy Birthday. The miserable kine quality makes it seem lots longer ago than forty-seven years. Wasn’t this close around the time of the Cuban Missle Crisis? Watching makes you think a bomb’s already been dropped and these celebrants are what’s left. Indeed, I wouldn’t be surprised to hear that everybody in that room came to bad ends. 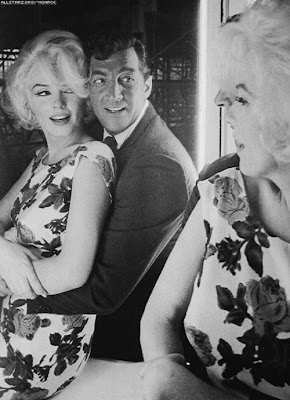 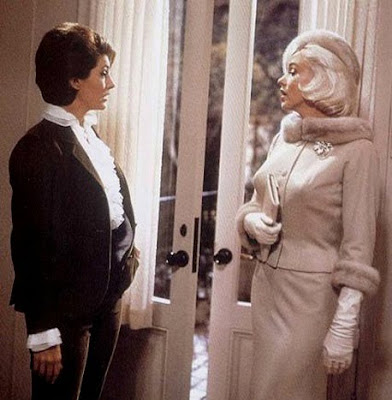 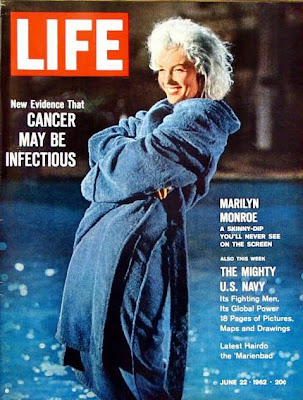 Would Monroe have been happier just being a model? According to histories, she came brightest to life when posing for stills. MM may have been the century’s most accomplished exhibitionist. Going into Something’s Got To Give minus added pounds she’d carried duringSome Like It Hot, Marilyn flaunted improvements and got huge publicity for a nude swimming scene that was featured on LIFE’s cover. This was hot potatoes for a yet Code-restricted 1962 and set observers were getting word out that she’d really done the scene naked. It’s naturally a focal point when watching Fox’s DVD construction. Lots of still proofs were tucked away from those shooting days and have dribbled out since. You wonder what more might be hidden in drawers and safe deposit boxes. The disc documentary, Marilyn: The Final Days, includes interviews with those few left to be consulted. Funny how doctors on camera arenever among those that prescribed hazardous drugs. One with an open collar and skin like a lizard handbag says MM must have gotten all her lethal stuff from somewhere over the border. That’s probably true enough. Or maybe Wally Reid’sprimary care still had a shingle out. Monroe supposedly made a deal with Fox to come back and finish Something’s Got To Give just days ahead of fateful 8/5/62, with director Jean Negulesco to replace George Cukor. Negulesco’s results could not have been any more dispirited than what Cukor had been getting. Something’s Got To Give was really better off not finishing. It serves us well enough as a forlorn document of a studio and star breaking last straws together.

I have read about this movie a bit and the special relationship Dino shared with Marilyn. Talk about a true and loyal friend, he would not continue without her and i am sure there was a LOT of pressure put on Dean to move forward with someone else. You very rarely see this kind of loyalty ever, esp in hollywood where the dollar bill is what is the most important thing to so many people. I am so sure this movie would have been a blockbuster if things had worked out. From what i have read the chemistry was amazing between the two. I can only imagine how this movie would have cemented Dean as one of very top actors in the world, along with Marilyn! Everyone will always think what mite have been.

Thank you DMP for another home run of behind the scenes info about the one and only Dean Martin!

Hey pallie, and likes thanks you Scotty-o for your ever faithful to sharin' mucho encouragin' patter here at our humble little Dino-pad...it's devoted pallies likes youse that make our efforts for Dino so so worthwhile! Keeps lovin' our most beloved Dino!