Hey pallies, likes our ever-growin'-in-devotion to our Dino pallie Scotty, over at his bountiful blog, "BlueisKewl" continues to find pixs and prose 'bout our most beloved Dino to share at his perfect pad in his ever expandin' effervescent efforts to gather more and more pallies into the Dino-fold.  Today we share 'nother in a trio of posts that Scotty put together to homage our King of Cool in this season of "The Day That Coolness Came To Earth."

This time 'round likes our Scotty-o features a famous pose of our main man with his pack of pallies tagged the Rat Pack.  It's 1960 in 'Vegas baby 'Vegas and our Dino and the guys are filmin' that hippeset of hip heist drama, "Ocean's 11."   Sir Scotty adds a bit of patter 'bout the pack the the trio of flicks that they filmed together.

We sez thanks so so much pallie to Scotty for his on-goin- efforts of winnin' his readership over to the Dino-way!  To checks this out in it's original format, simply clicks on the tag of this here Dino-gram.  Dino-delightedly, DMP 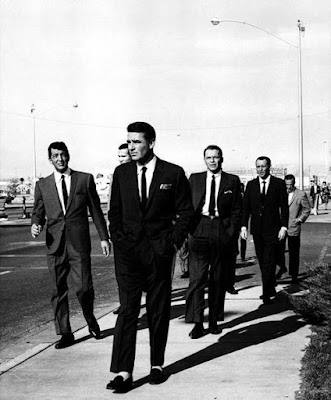 The Rat Pack was a group of actors originally centered on their leader, Humphrey Bogart. In the mid-1960s it was the name used by the press and the general public to refer to a later variation of the group, after Bogart's death, that called itself "the Summit" or "the Clan," featuring Frank Sinatra, Dean Martin, Sammy Davis, Jr., Peter Lawford and Joey Bishop; they appeared together on stage and in films in the early 1960s, including the movies Ocean's 11, Sergeants 3, and Robin and the 7 Hoods (in the last film, Bing Crosby replaced Lawford). Sinatra, Martin, and Davis were regarded as the group's lead members.
Posted by dino martin peters at 7:26 AM

Thank you so much DMP and Danny G. for your kind words and support. This photo was new to me and i really was happy to add it to my page as well as seeing it added to 'ilovedinomatin'!

Hey pallie, likes Scotty-o, as always you are most welcome in the name of Dino...your efforts are doin' our Dino proud! Keeps lovin', keeps sharin' our most beloved Dino!