Deano is my demesne.

Hey pallies, likes we were so so smitten to recently share Dartmouth blogger Mr. Joe Malchow's deep delight in our most beloved Dino in our post  ....here is the song that turned me over to Dean Martin that we felt directed to put the tags Joe Malchow and Dean Martin in the ol' google blog search drive to see if any other Dino-patter by Malchow woulda turns up.  Well, likes you guessed it dudes, we did find 'nother great bit of Dino-devotion from Dartblog, the source of our original postin'.

This second post is simply stated as "Rio Bravo" posted on January 14, 2008, just 'bout two months after the first Dino-sharin'  Seems that 'nother Dartmouth student had chosen to share some vid clips of our Dino in his most classy of classy roles as the Dude in "Rio Bravo" and in good fun Mr. Malchow pontificates that perhaps the blogger "aims to go into competition with Dartblog."  Likes what we found was so so cool is that Joe's punch line shows additional awesome adulation of our Dino.

Scribes Malchow..."Watch out, Empsall (the other student blogger) —Deano is my demesne."  Well we gotta 'fess up that our vocab doesn't regularly include the word "demesne," so we had to google the definition to find out just how cool Joe's appreciato of our Dino is.  "Demesne" is from the days of  the feudal system of land ownership and may refer to realm and domain.  So in this prose Mr. Joe Malchow is referrin' to our most beloved Dino as his domain.....and likes how fabulous is that pallies?!?!?!?!

We here at ilovedinomartin are thrilled to see both of these well bred young men sharin' there diggin' of our Dino with their readership.  So, thanks to Mr. Joe Malchow for more revelatory remarks a la Dino!  To checks this out in it's original source, simply clicks on the tag of this here Dino-gram. 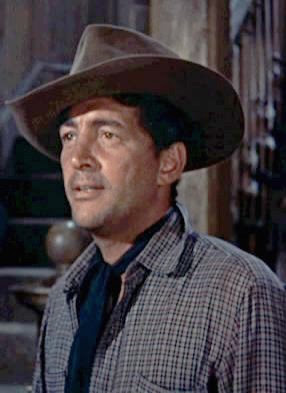 Nathan Empsall, Dartmouth junior, aims to go into competition with Dartblog, it seems. Or at least that’s what his posting of these superb Dean Martin clips telegraphs. Watch out, Empsall—Deano is my demesne.
BY THE BYE: Did you know that Rio Bravo was John Wayne’s expression of his support for the blacklisting of Communists in Hollywood?
Posted by dino martin peters at 7:08 AM