Did you know Dean Martin was going to be in Star Wars?

Hey pallies, likes here's 'nother fun post dudes!  Likes we just loves it (or at least most of the time) when our Dino gets parodied  on the ol' 'net.  It simply shows that our Dino is as cool, hip and randy as  ever!  Today we takes you to the relatively new to blog sphere blog, "FAKING STAR WARS."
As the blog's tag suggests the mission of this site  "is dedicated to creating Star Wars rumors that are 100% fake."

We are pleased to note that our most beloved Dino is the focus of a recent FSW's post, "Lost Interview With Dean Martin Reveals He Turned Down Star Wars Role!!"  Beginnin' with a cropped pix of  Princess Leia holdin' the arm of our Dino, this most coolly  creative scribin's has a reporter patterin' with our Dino 'bout the possibility of his starrin' in the epic "Star Wars."  Likes pallies this is fun fun stuff and 'nother wonderful way of spreadin' Dino-magic with the sci fi crowd.

We sez our thanks to Star Wars "faker" "Montgomery Garrett Antilles" for this inspired 'n insightful way of connectin' the King of Cool with the king of sci fi flicks!  We digs it dudes and hopes many many more will come to dig our Dino through this perfect prose parody!  To checks it out in it's original source, simply clicks on the tag of this here Dino-report.  Dino-funnin', DMP 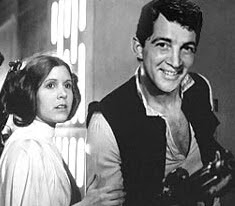 Did you know Dean Martin was going to be in Star Wars? Yeah, we thought you wouldn’t. Thankfully though, Jacen's Dean Martin fanboy cousin found this little gem hidden in a private auction selling Dino’s stuff for charity. Hit the jump to read more!

Jacen's cousin promptly turned this reel-to-reel over to our writer/visual simulator Comrade J Red and he was able to restore it to a listenable quality. We were able to transcribe it to this written format before the reel went up in flames which kept us from ripping it to an mp3.

Reporter: “So Dean, awhile ago you mentioned something about going back to film back in the 80’s, but you never did. What happened?”

Martin: “Ah, yes. Well as you know, I have my own gigs, and shows, but of course movies were too much work for me. Everyone knows me for the westerns, a few war movies, and anything classy, but I hadn’t done yet was science fiction."

Reporter: “And that’s when you found Star Wars, correct?"

Martin: “Not at all! I had never watched the movie when it came out. It wasn’t until a friend of mine mentioned that I should do something different for a change of pace, and he said he had contacts from Lucasfilm. So he made a few inquiries for me, then announced that George was interested in having me in his next film. I said ok, let’s see what we can do.

A month or so later I was given the script. It didn’t make any sense! I was supposed to be playing the governor of Cloud City or something, but there wasn’t much class about him. So I asked if I could sing a song. George said ‘No.’ I said ‘Fine.’  The next thing I wanted was to understand what on earth I was saying. So George and I talked a lot about this world my character lived in, and quite honestly it was making less and less sense, but I was still game for it.

So now we’re a few weeks away from filming my scenes, and I ask George for a favor. He says “Of course Dean, what is it?”“Can I get the Rat Pack in here?”

He thought I was kidding! I told him I was serious! None of my pals had been in anything like this, so I thought it would be great. Don’t you think Frank would have made an excellent singing robot? I do. Sammy Davis Jr. as a flirtatious body guard? It would be great.”

Reporter: “So what happened?”

Martin: “Well… they ran things differently from what I’m used to, and creative differences, I decided it would be better if someone else had the role. So I left peacefully, and no one ever mentioned I was going to be in the film.”

Reporter: “Have you watched the film yet?”
Martin: “I have. It was excellent, though not my style. I’m glad I was able to enjoy it like so many others.”

Reporter: “That’s great. Do you wish they had done anything differently?”

Martin: “No, no, not really. Well, Billy Dee Williams is a great singer, and I think it would have been great if he had sung “Everybody Loves Somebody Sometime” to the princess, but that’s just me! [laughs]”

And there you have it everyone, a rare bit of history very few have known until now! Somewhere in a parallel universe, Dean Martin played Lando Calrissian, singing the classics to Princess Leia…
Posted by Montgomery Garrett Antilles at 9:00 AM
Posted by dino martin peters at 7:25 AM

Was Dino really suppose to be in 'Star Wars' or was this simply a 'Fake Rumor' from that blog? I am a bit confused but i usually am about these sort of things! :-)

Hey pallie, likes Scotty-o, as you sez it was a 'Fake Rumor,' but very very cool in our Dino-thoughts...we loves to see all the swingin' places that our swingin' Dino shows up! Keeps lovin', keeps sharin' our most beloved Dino!

How cool would have it been instead of Bill Dee Williams, Dean Martin took his part in 'Star Wars'. The possibilities would have been endless.

Thank you my friend for this fun and cool blog!

Hey pallie, likes we couldn't 'gree more with you...woulda made for one swingin' time in outer space! Keeps lovin', keeps sharin' our most beloved Dino!