Hey pallies, likes once 'gain this day we return to our perfect pallie Scotty's perfect pad, "BlueisKewl" for the last of his Dino-honorin' posts accentin' our most beloved Dino on the anniversary of "The Day That Coolness Came To Earth."  Scotty's third offerin' is a stunnin'ly swank 'n slick  snapshot of our Dino in the recordin' studios of Capitol Records in 1958.

Ever present cigarette in hand, tie loosened, sittin' on a stool with legs crossed , our Dino is the perfect picture of cool.  It's a classy candid of the classiest 'n cool man to ever walk the face of the earth.

We so so appreciate our deeply devoted to Dino pallie Scotty-o for proudly proclaimin' his adulation of our main man encouragin' his remarkable readership  to grow deeper and deeper in Dino.  To checks this out in it's original source, simply clicks on the tag of this Dino-message.  Always, Dino Always, DMP


Dean Martin During a Recording Session at Capitol Records, 1958 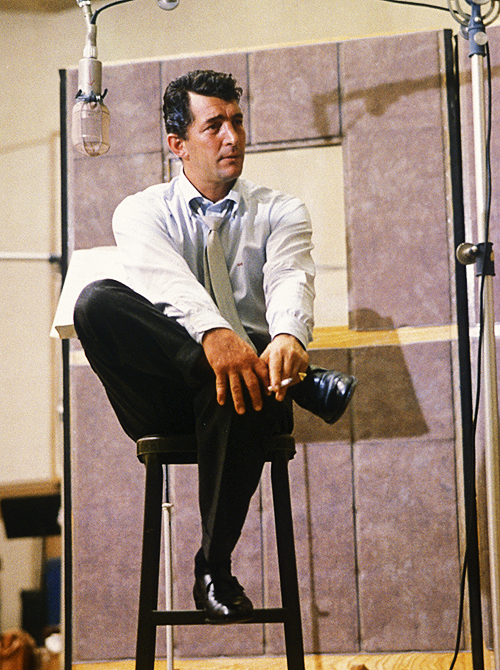 One of the most popular and enduring American entertainers of the mid-20th century, Martin was nicknamed the "King of Cool" for his seemingly effortless charisma and self-assuredness. He and Jerry Lewis were partners in the immensely popular comedy team "Martin and Lewis". He was a member of the "Rat Pack" and a star in concert stage/nightclubs, recordings, motion pictures, and television. He was the host of the television variety program The Dean Martin Show (1965–1974) and The Dean Martin Celebrity Roast (1974–1985).

Martin's relaxed, warbling crooning voice earned him dozens of hit singles including his signature songs "Memories Are Made of This", "That's Amore", "Everybody Loves Somebody", "You're Nobody till Somebody Loves You", "Sway", "Volare", and "Ain't That a Kick in the Head?".
Posted by dino martin peters at 7:19 AM

Thank you my friend for your continued support on 'ilovedinomartin'! I came across this photo and only needed a quick glance to know it was the king of cool himself! Dino looks so relaxed and in all his glory here in the recording studio making wonderful music.

Keep up the great work as always!

Hey pallie, likes it is always our pleasure here at ilovedinomartin to share your liftin' up of the life, the times, and the teachin's of our Dino! Keeps lovin', keeps sharin' our most beloved Dino!