"Marshmallow World" is a song that's been covered by a lot of folks, but I feel like the Dean Martin version is the gold standard.

Hey pallies, likes dudes it was January 21 of this very Dino-year 2012 when likes for the first time ilovedinomartin quoted Winston Churchill when he said, "All good things come to those who stand and wait." The reason for the quotation then was 'cause after waitin' for likes what seemed likes forever, I stumbled 'cross a review of "Airport" that was truly worthy of our Dino. You may or may not recall that Mr. Matt Cale scribed, MASTERS OF DISASTERS: DEAN MARTIN IN AIRPORT. I had been waitin' for years to read a smart----a cool, hip, and ever randy Dino-centered review of his big screen epic performance in Alex Haley's "Airport," and Cale's contribution was likes totally totally on the Dino-mark.

Well today, ilovedinomartin 'gain quotes from Mr. Churchill that indeed, "All good things come to those who stand and wait." This time 'round we repeat statesman's Churchill's remarks 'cause after tons of time passin' by, ilovedinomartin has happened on a smart----a cool, hip, and every randy Dino-centered review of this Dino-holic's fav of fav Dino-seasonal croons, "Marshmallow World"...and likes dudes I am likes totally totally smitten!

From the musical pad, "Progressive Boink," comes "Progressive Boink Holiday Mixtape: Dean Martin's 'Marshmallow World.'" Scribed by a Miss Emily Rowley, it is so so coolly written...truly worthy words for our King of Cool. Likes all you pallies are simply gonna haves to take the time to review Miss Rowley's reflections on this awesome Dino-winter croon, but likes here is a wee sample of Emily's devotion to our most beloved Dino...."Seriously, doesn't Dean Martin seem like the kind of dude who would've made you swallow his pinky ring for correcting him on the color of the sun?"

Anywho dudes, likes it goes without sayin' that ilovedinomartin is in Dino-heaven to have the likes of Miss Emily Rowley spreadin' the Dino-word in this way to all Progressive Boink's readership. ilovedinomartin 'pressed our deepest of deep Dino-appreciato to Rowley for her remarkable randy remarks on our Dino's croonin' of "Marshmallow World." To checks this out in it's original form, simply clicks on the tag of these Dino-thoughts. Dino-always, ever, and only, DMP 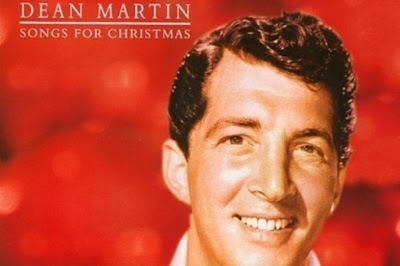 A slurring tribute to confectionery winter vistas with a questionable understanding of how color works.

90% of Christmas music tends to fall pretty easily into just a few set categories. You have your Grade School Essentials, songs like "Rudolph the Red-Nosed Reindeer" or "Frosty the Snowman." These are songs so ingrained in the cultural lexicon that you don't even necessarily need to hear them at Christmastime, you're just kind of always hearing them in your head anyway. Or maybe I just have a really jolly form of schizophrenia? Anyway. Then you have the Standards, your "White Christmas" or "I'll Be Home for Christmas." These tend to get covered on basically every Christmas album, but are most often associated with someone like Bing Crosby or Andy Williams.

Next you have what I call, "The Non-Radios." This can cover both your instrumentals or your more overtly religious tunes. That's not to say you won't ever hear them on the radio, or on a CD, or blaring through the speakers at Home Goods while you ogle fancy olives, but are really should only be enjoyed live. Like, have you ever heard a version of "Silent Night" on the radio and thought, "damn, son! Turn that ethereal shit up!" No, of course not. "Silent Night" is best enjoyed in a church, being sung by a nine year-old with the voice of an angel. That's just math.

Acceptable Contemporary is pretty self-explanatory, but there really isn't much meat on the bone when it comes to essential Christmas songs from the last 30 years. Bill has already covered the best of these offerings. Honestly, one's feelings on Acceptable Contemporary tend to hinge entirely on their feelings about Wham's "Last Christmas," aka, "The Most Divisive Christmas Song of All Time." If you're like me, you love it and listen to it approximately 973 times every year.

If you're not, you're probably in your icy lair plotting to steal the last can of Who Hash.

Finally, you have the Novelty Hits. They . . . well they are what they are. You either want a hippopotamus for Christmas, or you don't. For me, my favorite holiday songs usually fall into a pretty strange niche. They tend to be older, but slightly less ubiquitous. Like the dumb rube cousins to the songs you would find in the Standards category. I'm talking about your "Christmas Island" or your "Suzy Snowflake." These are the songs you only learn exist after watching the Sounds of the Seasons channel for eight straight hours while sitting around in your jingle jammies obsessively scrolling through the Benedict Cumberbatch tag on Tumblr. I mean cleaning your house. I mean doing science experiments.

"Marshmallow World" is a song that's been covered by a lot of folks, but I feel like the Dean Martin version is the gold standard. I base this on nothing, because I couldn't take two seconds to look it up because SERIOUS JOURNALISM, but I'm gonna go out on a limb and guess that Dino recorded this towards the end of his career. I say this because he sounds SUPER DRUNK through the entire song. And this is on the Dean Martin Scale of Relative Drunkenness, where if a 1 is cirrhosis for a normal human, Dean's still at like an 8. I know staggering drunk was kind of his whole schtick, but he usually had his shit together better than this.

Dean's slurring so badly on this track that it sounds like it's being played at half-speed. And that's before he starts just talking gibberish about how, "the sun is red, like a pumpkin head," a line I assume he just made up on take 75 and the booth guy left in because he wanted to get home to see his family. Seriously, doesn't Dean Martin seem like the kind of dude who would've made you swallow his pinky ring for correcting him on the color of the sun? Now that I've said it I'm almost positive it probably happened.

The best part of the song is when, after singing about how awesome and fluffy winter is, he just randomly throws out, "WHAT IF SPRING IS LATE?!" Like . . .I don't know? You'll have to wait to plant string beans? Jerry Lewis will see his shadow and scurry back into his tree stump? I'm pretty certain you live in Vegas, so the point seems moot.

Ha ha! I love it! Dean always gets that whole "drunk" thin' though. People just don't get it I guess. O well...good review just he same!

Ha ha! I love it! Dean always gets that whole "drunk" thin' though. People just don't get it I guess. O well...good review just he same!