Hey pallies, likes dudes, here's 'nother real sweet Dino-treat for this Dino-iday season. Likes this doesn't happen anywhere near as often as ilovedinomartin woulda likes, but likes every so often we finds a public education source that has so so wisely put the accent on our most beloved Dino...and that pallies is the platform of today's Dino-reportin'.

From the web home of Indiana Public Media comes the news (likes sorry to be so late in sharin' it) that Afterglow, "a weekly one-hour radio program of jazz and American popular song hosted by David Brent Johnson and produced by WFIU Public Radio," has created a programme homagin' none other then our King of Cool.

Mr. Johnson chose to center his mid November 2012 episode of "Afterglow" on our great man's great '64 "laidback martini-at-the-fireside album," "Dream With Dean." From Mr. J's comments it is crystal clear that he is a true knower of our Dino! And likes what a wonderful wonderful thin' to have the swingin' music of our swinger Dino bein' distributed over the airwaves of Indiana's Public Radio!!! This certainly ain't gonna hurts the cause of more and more pallies comin' to know, love, and honor our Dino.

Hats off to Mr. David Brent Johnson and the pallies at Indiana Public Radio Station WFIU for puttin' such a huge huge accent on our great man. To listen to this very special Dino-programme simply clicks on the tag of this Dino-gram to be carried to the Afterglow pad which is just a click away from hearin' the Dino-episode. Dino-psyched, DMP btw pallies, this "laidback martini-at-the-fireside album" woulda be likes a stellar Dino-giftin' op for a pallie that is just gettin' into the Dino-groove!

In 1964 Dean Martin recorded a laidback martini-at-the-fireside album that included the original version of a song that would soon become his signature tune. 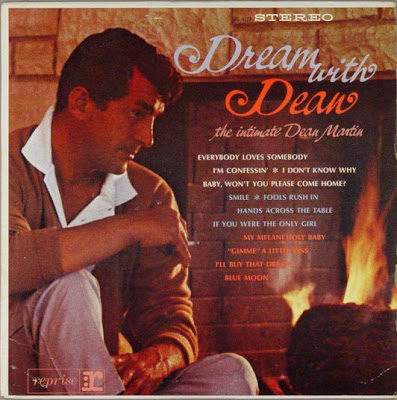 Dream With Dean is singer Dean Martin’s excursion into late-night lounge ballads, with the vocalist accompanied by a jazz rhythm section made up of guitarist Barney Kessel, pianist Ken Lane, bassist Red Mitchell, and drummer Irv Cottler. Dream With Dean would be released almost simultaneously in 1964 with Everybody Loves Somebody, another Martin album that featured a more conventional orchestra-and-backup singers setting for the vocalist. Both albums would stay on the charts for a combined 80 weeks. Dream With Dean‘s laidback context makes it an album that liner note writer Stan Cornyn said will “relax you like sloe gin after a fast night.”

Other artists featured on the program include James Carter, Frank Sinatra, Sarah Vaughan, Dexter Gordon, and Rene Marie.
Posted by dino martin peters at 7:11 AM

My favorite song on that album is "I'm Confessing'." I'm also particularly fond of "Fools Rush In."

I think that this particular Dino album is his mellowest work -- probably because of the intimate arrangements of the songs.

Hey pallie, likes Miss AOW, thanks for sharin' your personal Dino-favs and for your insight into the mellowness of this particular al-b-um. Keeps lovin' our Dino!

I know it's been said...many times...many ways....this is one of the greatest "Lounge" records of all time!