....loaded with great holiday music and some equally enjoyable comic skits starring Deano and his friends.

Hey pallies, likes I just had to pass on a fuller ver-si-on of the "philspicks" review that ilovedinomartin just shared with you. Indeed Phil is at the head of "philspicks" 'cause I just ran 'cross this enriched edition of Phil's pontifications at the blog pad "9 On Your Side." for television station WNCT in North Carolina.

Phil is Mr. Phillip Sayblack who "joined WNCT-TV 9 in 2004" and below you will find a bit more in depth review of what was first posted at his "philspicks" pad. Likes don't need to say much more, but likes how cool to have Mr. Sayblack spreadin' his obvious deep appreciato for the Dino-seasonal special in more then one web presence.

So, likes thanks 'gain Mr. Sayblack for gettin' the word out to many 'bout this very very special Dino-show release. To view this in it's original format, as usual, simply clicks on the tag of this Dino-message. Dino-awed, DMP 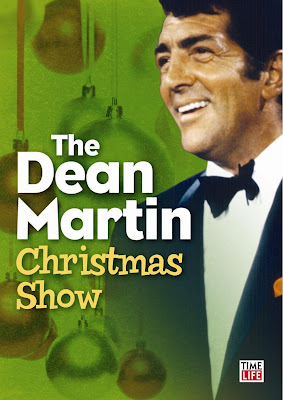 Good morning, everybody. I hope your week is going well so far. Now that the countdown to Christmas is on, we all see the holiday specials everywhere on television. As a matter of fact (chea pop here) CBS is running one of the classic Rankin Bass holiday specials tonight in the for of Rudolph the Red Nose Reindeer. Watching the Rankin Bass specials is tradition regardless of whether or not one already owns those sepcials on DVD or Blu-ray. As many specials as there are on tv every holiday season, there are still so many that have yet to be unearthed. Thanks to the good people at Time Life and NBC Universal, audiences now have the chance to see another classic holiday special that hasn't see the light of day in a long time. That special is The Dean Martin Christmas Show. This near hour long special is loaded with great holiday music and some equally enjoyable comic skits starring Deano and his friends. It's one that more seasoned audiences will appreciate, and newer audiences will get to enjoy for the first of many times to come. Enough fo my rambling. Without any further ado, I offer for your consideration dear readers, The Dean Martin Christmas Show.

Time Life and NBC Universal have unearthed a nice piece of holiday television history with the release of The Dean Martin Christmas Show. This holiday special is a relic of a bygone era. It’s another prime example of everything that was once right with television. Much like with the recently released Carol Burnett Show sets, this unearthing shows that there is still love and interest for classic television. As great as all of the annual holiday specials are, this once forgotten special reminds audiences that there is still much more out there that is just as enjoyable as the aforementioned specials.

The Dean Martin Christmas Show runs at less than an hour long. The majority of the material in this special is musical numbers. Although there are some skits tossed in for good measure, too. OF the few skits included in this show, the best of them is the cop skit with acting legend Dom DeLuise. DeLuise plays a street cop who tries to give Santa a ticket for parking his sled in a no parking zone. While audiences never see Santa, the ability of DeLuise to interpret what would have been Santa standing there before him shows his talent. And his reaction after Santa gives him a present, despite the attempt to give him a ticket, brings the whole skit together. It makes for lots of laughs even years after its original airing.

Dom DeLuise isn’t the only star who gets his chance for laughs in this special. Fellow veteran actor Bob Newhart also gets his time to shine. Newhart stars alongside Martin as a customer trying to return a toupee. Martin plays the part of a clerk in the complaint department in the store where Newhart’s character is returning the toupee. The chemistry between the pair is obvious as Martin can’t even hold back his laughs throughout the course of the skit. Yet by contrast, Newhart somehow manages to maintain his character’s deadpan persona, which is probably why Martin was unable to contain his laughs. It’s just one more moment that viewers yearning for that nostalgia will enjoy and appreciate with every watch.

The skits included in this roughly forty-eight minute holiday special make for their own share of enjoyment. The musical numbers add even more nostalgia and enjoyment, too. Martin and company share their own renditions of a number of Christmas carols. Home viewers won’t be able to resist signing along a little bit, too. When it’s all said and done, audiences of all ages will realize that what they’ve experienced is something very special. Add in the original quality of the broadcast and that feeling gets even stronger. Audiences can experience that feeling for themselves now as The Dean Martin Christmas Show is available now on DVD courtesy of Time Life and NBC Universal. It can be ordered online direct via Time Life’s store at http://timelife.com/products/the-dean-martin-christmas-show.

Hey pallies! I caught that Rankin Bass "Rudolph The Red-Nosed Reindeer" classic on the tube too. Man, I never realized just how much Clarissa's dad was a "Pain In The A". She's Rudy's Doe Gal Pal! Anyway, thanks for this straight up review of Dino's Christmas Show. The folks seem to be a little nostalgic for this kind of entertainment! All the best to DMP and Dino-holics worldwide!

Hey pallie, likes indeed Matty-o...what the world is desirin' is more and more of our Dino! All the best to our Dino-phile Matty! Keeps lovin' our Dino!

83And here's a belated tip o' the hat to cats like Dom Deluise and Bob Newhart. They could ad-lib with the best of them and were important ingredients in the comedy cocktail of the Dean Martin show!

Hey pallie, likes indeed Matty, our Dino certainly knew the cool cats to surround himself with on the Dino-show...our great man 'specially loved the great talents of Mr. Dom. Keeps lovin' our Dino and likes thanks so much for more Dino-patter to feed my Dino-soul!