Hey pallies, likes on this fourteenth day of Dino-winter-month ilovedinomartin takes you to a way cool Brit Chick pad tagged "femguide" where Miss Rachel has shared a marvelously magical musical review of our Dino's first ever winter tunes al-b-um.

Likes of course that woulda be none other then the 1959 release of that randy record, "A Winter Romance." Rachel is obviously someone who totally digs the Dino-sound and as you read her scribin' it will become likes very obvious that this is one young lady who is truly in-theiDino-know! Likes here is just a couple of her numerously nuanced Dino-thoughts....

"Martin was known for his easy charm and somewhat boozy performances, and he set women’s hearts on fire the world over."

"Your mother especially might appreciate a Dean Martin CD as he was something of a heartbreaker with the ladies during his day!"

One of the coolest thin's 'bout this review dudes is that reviewer Rachel shares quite a bit of Dino-details 'bout the various releases of this record...and, likes gotta 'fess up that I never knew these important Dino-facts before. And, this remarkable Rachel lady a absolutely fab job of encouragin' her readership to gift others with this classic classey Dino-al-b-um.

So pallies in this grand Dino-season, sits yourself down and immerse yourself in Miss Rachel's refreshin' remarks on our most beloved Dino's very beloved winter croons, "A Winter Romance." Kudos mucho to Miss Rachel and the pallies at "femguide" for bein' the guidin' star to the Dino-light for their readership sure to make many Brit Chicks devotees of our great man. In Deep Dino Devotion, DMP

Dean Martin was a legendary actor and performer that was part of the 1960’s so-called Rat Pack, frequently performing with Frank Sinatra, Joey Bishop, and Sammy Davis, Jr. Martin was known for his easy charm and somewhat boozy performances, and he set women’s hearts on fire the world over. He starred or costarred in dozens of films and his unique and personal style behind the microphone earned him over a dozen hit singles during his career. 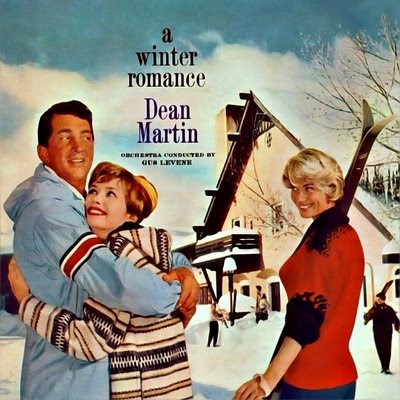 In 1959 Martin released a holiday-themed album, his first to feature holiday songs, titled ‘A Winter Romance.‘ The album features traditional Christmas classics performed by Martin in his standard loose and light style. It too was an instant hit with a full orchestra in the background and quickly became a best seller.

Songs on the Album Include

The Things We Did Last Summer

I’ve Got My Love to Keep Me Warm

Out in the Cold Again

It Won’t Cool Off

When the CD was rereleased in 1989, there was a thirteenth track added to the album, ‘The Christmas Blues.‘ In 2005 the CD was again released and they added another four tracks:

Martin was a favorite during the mid-1960s and a voice that has lasted through decades. This CD may be a great choice for adding some personality to your winter celebration this year. You might consider mixing up the music with other favorite performers from mid-century, including Elvis Presley, the Beatles, Fleetwood Mac, or even some music from the Motown era. Folk music was also popular during the 1960s so you might add Dean Martin’s music with recordings from The Mamas and the Papas or Bob Dylan.

The CD might also make a great gift item for your parents or grandparents if they loved music from this time period and often talk about the Rat Pack. The music might take them back to that time period when people still dressed for dinner and music still included a full orchestra! Your mother especially might appreciate a Dean Martin CD as he was something of a heartbreaker with the ladies during his day!

Check out ‘A Winter Romance‘ this season for your home or as a gift idea. It can be just what you need to add some whimsy and fun to your holiday and to create a true classic Christmas setting for your home.
Posted by dino martin peters at 7:10 AM

I've got the '89 version of "A Winter Romance". Top Shelf. As far as the later version goes...I never heard "Buttercup A Golden Hair" until it showed up as a Dino/Marilyn Monroe Youtube video. As a matter of fact, I think I might have perused that very video right here on DMP's Ilovedinomartin Blog! Oh, to have been the pool boy!!!

Hey pallie, likes Matty dude, indeed "A Winter Romance" is truly our Dino at his coolest, hippest, and randiest...and ya, you and I woulda have to fight over who gets to be the pool boy. Keeps lovin' our most beloved Dino!