A kitchsy Christmas with Dean Martin and friends.

Hey pallies, likes on this 19th day of Dino-winter-month ilovedinomartin shares with you yet 'nother review of the sensational Dino-seasonal DVD release of the 1968 Dean Martin Christmas Special. From the pen of a Gillian Gaar, "Seattle Pop Culture Examiner, commentator, comes her review tagged, "A kitchsy Christmas with Dean Martin and friends."

Well, likes I woulda never ever call our most beloved Dino or any any of his entertainin' "kitchsy," so can't agree with Gaar's thought on that, but likes at least she redeems herself by addin'..."Especially because it’s not trying to be." And, Gillian just can't get into the comedy in this special sayin', "There’s a few too many painfully unfunny skits." Now while the comedy of the Dino-shows have never been my deepest Dino-delight 'cause for me the max Dino-pleasure comes when our Dino sings solo, certainly anythin' our Dino partakes in coulda never ever be "painfully unfunny." So to ilovedinomartin this recent reveiw is mixed at best.

But, ilovedinomartin sez our thanks to Gillian Garr and the other pallies at the Seattle branch of the "Examiner" for makin' their readership fully Dino-aware of this most recent Dino-release. Any pallies who lift up the name of our Dino and spread the Dino-word are cool in the eyes of ilovedinomartin. To checks this out in it's original format, simply clicks on the tag of these here Dino-reflections. Dino-always, only, and ever, DMP

A kitchsy Christmas with Dean Martin and friends 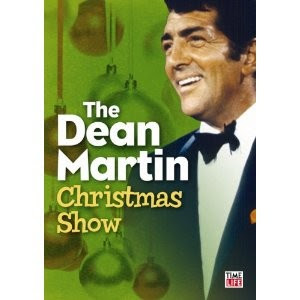 The Dean Martin Christmas Show, newly reissued by Time Life on DVD, is a kitschy delight. Especially because it’s not trying to be.

Dean Martin’s Christmas specials were a natural outgrowth of his TV series, The Dean Martin Show. This particular special first aired on December 19, 1968. There’s a few too many painfully unfunny skits, involving Martin and guest stars Bob Newhart and Dom DeLuise, so you’ll want to fast forward to the music numbers: Martin crooning through “It’s a Marshmallow World,” and cuddling up to his backing dancer/singers, the Golddiggers, for “Santa Claus is Coming to Town” and a “Daddy” medley of “Daddy,” “True Love,” and “We Wish You the Merriest.”

Martin then introduces special guest star Dennis Weaver, who gamely warbles his way through “The Marvelous Toy,” with everyone joining in for a final medley of “Deck the Halls,” “Joy to the World,” and “Silent Night.” Most interesting is the final spot, where Martin and 39 other stars announce which children’s hospitals across the nation will be receiving a visit from St. Nick. It’s fun to see the range of folks, including William Holden, Lucille Ball, Tony Bennett, and Roy Rogers, among other, in this sequence.

Unfortunately, there are no extras; it’s simply the 48-minute special, with no commentary or anything else. Still, it would make a fun backdrop to your holiday bash.

Mr. AOW and I are going to watch the DVD on Christmas Day.

Hey pallie, likes Miss AOW 'though the temptation has been great...I too am savin' my Dino-viewin' 'til the Eve of and/or Dino-winter-day to partake of this Dino-seasonal special! Keeps lovin' our Dino!

DMP,
Heads up! Tomorrow, I'm posting our Dino's "Canadian Sunset." I hope that you'll stop by to comment.

I can't let a Christmas go by without posting at least one of our Dino's great renditions of the season.

Well folks. The humor might seem "kitchsy" to the writer BUT we must remember that during those times TV shows were CENSORED. Today, just about anything goes; especially on Cable TV! Look, this is a good holiday show from TV days gone by. If it makes you feel good..play it to the max. It's DINO and we're happy to have it!!! :)

Hey pallie, will certainly do Miss AOW....keeps lovin' our most beloved Dino!

Hey pallie, likes Matty-o..thanks for this wonderfully Dino-focused thought my friend...everythin' needs to be looked at from the Dino-perspective! Keeps lovin' our Dino!