there was only one man who could both imbibe and impress onstage: Dean Martin.

Hey pallies, likes the pallies at google led moi to yet 'nother intriguin' review of The Dean Martin Variety Show: Uncut. From the blog site "Blog Critics" comes the groovy patter of nouveau hipster Luigi Bastardo, "the disgruntled alter-ego of Adam Becvar, a thirtysomething lad from Northern California who has watched so many weird movies since the tender age of 3 that a conventional life is out of the question."

Likes dudes as you can tell by the way that "Luigi" describes himself he is one hip and swingin' dude. From the moment I read "Luigi's" openin' Dino-reflections...."there was only one man who could both imbibe and impress onstage: Dean Martin," I knew this pallie truly truly "gets Martin."

But likes Mr. Becvar has likes gotten me all confused by his profound proclamation, "Of course, no matter how one labels it, it does not alter the fact that these episodes have been altered themselves, and are in no way to be construed as 'uncut.'" Adam states this numero times in his patter, even givin' an example or two, but to my humble mind I truly thought that these Dino-shows were uncut 'cept for the "missing a song from guest singer, Buck Owens" as mentioned in the programme booklet.

So am wonderin' what all you pallies make of Becvar's claim...will so so be interested in pallies likes sharin' their Dino-perspective on this.

But, whatever the case, I likes digs to the max Adam Becvar's powerfully pure pontification's on The Dean Variety Show: Uncut. Kudos to him for puttin' other pallies on to our most beloved Dino. To view this likes in it's original context, likes clicks on the tag of these Dino-ramblin's. Keeps lovin' and viewin' our Dino pallies! Dino-always, ever, and only, DMP


Though there have been numerous entertainers who have attempted to pull it off over the years, there was only one man who could both imbibe and impress onstage: Dean Martin. In fact, his legendary enthusiasm for consuming cocktails prior to performing made the viewing of his own live variety television show worth viewing on its own merits — to say nothing of some of the talent he brought aboard. Originally beget as The Dean Martin Show for NBC in 1965, the show was later given the titled The Dean Martin Comedy Show, and is presented in this three-disc set under the name The Dean Martin Variety Show: Uncut. Of course, no matter how one labels it, it does not alter the fact that these episodes have been altered themselves, and are in no way to be construed as "uncut." 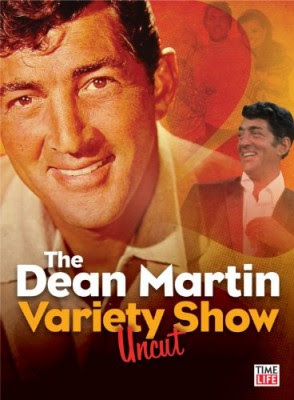 Not that I'm complaining, mind you. This set is a delightful stroll down the avenue of Television's Past, giving modern-day viewers — who probably have no idea what a variety show is to begin with — a chance to see the warmth and ability of both the show's host and his guests, as well as the frequent mishaps that would occur when Dean or anybody else missed a cue, flubbed a line (something Dean usually did more than anyone, to wit he starts ribbing the cue card guy), or yanked on Eddie Foyle, Jr.'s hair only to reveal to the entire world he was wearing a toupee (which actually happened, and is, thankfully, included in this set). The Dean Martin Variety Show: Uncut presents six random episodes from the hour-long primetime program, ranging from 1967 to 1971.

Over the course of the set, you'll notice a lot of changes in the way the show looks, though the formula rarely changed. Every week, Dino would either drunkenly dance his way onto stage or slide down a pole from a swingin' '60s-esque set to introduce himself, always crooning "Everybody Loves Somebody," and usually accompanied by a lighted cigarette. Several musical and comedy acts would follow, with Mr. Martin taking the recurrent trip to a closet door in order to provide a cameo appearance by some famous celebrity. For the finale of the show, the cast of week would escort Dean in a song, with our host concluding the evening's events with a warm word and a corny joke (which even he occasionally winced at, wisely quipping something like "Hey, they can't all be good, you know!" when he did).


Guest stars for the six episodes of the misleadingly-titled The Dean Martin Variety Show: Uncut include Sid Caesar, Jackie Mason (who is a hoot as always, but is even funnier when you watch him try to sing and dance in the closing medley!), Leslie Uggams, Allen & Rossi, the aforementioned Eddie Foy, Jr., Buddy Ebsen, Cyd Charisse, Dom DeLuise, Bob Newhart, Orson Welles (yes!), Joey Heatherton (oh, mama!), Zero Mostel, and Jackie Vernon. Many of the performance pieces are genuinely entertaining, and the "closeted" cameos include Pat Boone, Phil Harris, and Robert Wagner. There's also one particularly bizarre muscleman routine (by David and Goliath) that brings to mind a completely different definition of "closeted."

As I said earlier, this set is not uncut. There are multiple noticeable cuts in the programs (they may have been edited down for syndication or some such nonsense), with one standout moment involving a guest, Professor Backwards (James Edmondson, Sr.) — a feller who could write and read any word in reverse. During this particular sketch, an audience member shouts out to spell "supercalifragilisticexpialidocious." He jokes that he won't do it, and suddenly the presentation cuts to him working on something else — to wit we can now plainly see the abovementioned Mary Poppins expression has in fact been spelled out on the blackboard behind him. Frown. Another interesting bit of disconcert for me occurs with the discs' menus, wherein we see four of Dean's beautiful chorus girls (the Golddiggers) performing an introductory number — an opening that is taken from another show entirely and not included on either episode here.

One wonders if Time Life — who brought us this fun but inappropriately-named release — only had access to a few episodes, or assigned the production of the disc to someone who had absolutely no idea what he or she was doing. There's also an episode that is missing a song from guest singer, Buck Owens; fortunately, there is a disclaimer about that one in the set's insert booklet. Oh, well: it's still a fun set to watch, and is good fun for the whole family — even if we don't get to find out how to spell "supercalifragilisticexpialidocious" in a contrary manner.
Posted by dino martin peters at 7:17 AM

Well, I'm not sure what I think about being called a "hipster" in this day and age, but thanks for the repost and the praise. Only, if you would please, provide a link to the original source, I'd greatly appreciate it: "Article first published as DVD Review: The Dean Martin Variety Show - Uncut on Blogcritics."

Hey Pallie, I dig his review but thinks that he is bein' just a wee bit harsh by claimin' that these minor thins', that he points out, would take the "uncut" title away from these great great DVD's. Either way pal...they are pure pure, unadulterated, Dino-magic!

Hey pallie, likes I am with you Danny-o all the way..."they are pure pure, unadulterated, Dino-magic!" btw man, likes dude, do you have a fav 'mong the six episodes? Keeps lovin' our Dino!