Hey pallies, likes so so sorry to have been missin' in Dino-action for the past few, but likes cool to see that our great pallie Danny G. did an outstandin' special edition of the Dino-serenade on our most beloved Dino's 95th birthday! Well, nows that I am back likes gonna tries real hard to make up for lost days of Dino-postin's.

First, we thanks our pallie DeansPalley for puttin' us all on to the most honorin' of honorin' Dino-posts from our Dino-devoted pallie Mr. Pete Emslie of "Cartoon Cave" fame. Pete is an extremely talented artiste who loves to put the accent on 'toonin' and in remembrance of our Dino's b-day, he created the coolest of cool Dino-toons.

Likes checks out our Dino with his Dino-buddha grin, swank tux, and ever present smoke....simply a Dinoly delightful Dino-pose. Emslie, as you can read below is totally totally sold out to our Dino and likes how cool to see him use his talents to homage our Dino in this matter. And great of Pete to add his own wise words on the releases of the Dino-shows on DVD...just gotta say that we at ilovedinomartin are with you all the way on this.

Hats off to our pallie Pete Emslie for rememberin' our great man with his great artistic talents! To checks this out in it's original format, likes just clicks on the tag of this Dino-message. And, thanks also pallie DeansPally for puttin' us on to this great Dino-devotion. Dino-always, ever, and only, DMP 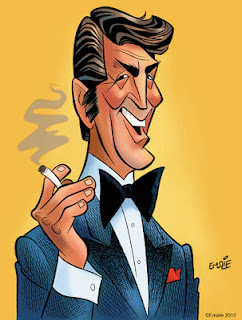 Yes, June 7th marks the 95th birthday of Dean Martin, one of the favourite performers here at The Cartoon Cave. Now that Time-Life are releasing some of The Dean Martin Variety Show on DVD sets, I've been itching to do another caricature of ol' Dino. Though the first two DVD sets have been a bit disappointing for the fans, as they're cut down and missing some of the music numbers due to licensing hassles, I gather that the 3rd set just released finally features complete shows. I sure hope that Time-Life now continue with this approach to keep us all happy.

The Dean Martin Variety Show was a great example of the long popular variety show format that has sadly been missing from network TV for too many years now. I personally feel that the variety show was an integral part of the TV schedule, as it brought together top entertainers from TV, movies, and the music business. The benefit was that it kept all popular entertainers of that era very much in the public eye, creating a shared culture for all viewers to enjoy together. We really don't have that today, what with the severe fragmentation of the television audience due to the "500 Channel Universe", where no single show gets much of a market share. Frankly, I was a lot happier back when there were no more than about two dozen TV channels and just the three big U.S. networks creating shows that were genuinely entertaining. Not so anymore, in my opinion.

While most of the variety shows were rehearsed laboriously every week until the day they were taped in front of a live audience, on Dean's show only the guests rehearsed all week. Dean's contract stipulated that he didn't have to show up until taping day if he didn't want to, as Dean liked to keep his image real loose, even stumbling over his reading of the cue cards to add to the comic effect and his on-screen image of being a bit tipsy with the booze. It was an individual approach that worked so well for Dean, as he knew that his natural charm would suffer if he had to adhere to a tightly scripted format.

It also helped when he had just the right chemistry with his guests, as I think is evident here in this clip alongside cute and adorable Goldie Hawn, who was then one of the stars on the very popular comedy review, Laugh-In:

Dean would have been 95 this year but his great talent has made him immortal.
New generations will continue to discover his songs,movies and shows

Hey pallie, indeed Miss Ky our most beloved Dino is IMMORTAL and how wonderful to know that "New generations will continue to discover his songs,movies and shows.
Keeps lovin' our Dino!