All in a Night’s Work is getting its first-ever soundtrack release courtesy of the Kritzerland label!

Hey pallies, likes one of my fav blogs when it comes to current recorded music updates in the pad, "The Second Disc." These pallies have been great 'bout reportin' each and every new Dino-associated release, and in the postin' below they lets us all in on a real cool Dino-find that I just know that many of you dudes are goin' to wanna partake of for sure.

From the pen of Mr. Joe Marchese comes word that the first-ever release of the sound track for our Dino's fab comedy "All In A Night's Work" for take place durin' the last week of July. The music for this flick was composed by none other that Mr. André Previn, and for whatever reason, it never was placed on disc before.

Bein' released under the Kritzerland label, the al-b-um will retail for $19.98 and will have a limited edition of only 1000 copies so pallies likes us are gonna wants to get our order in early. Likes am totally totally blown 'way with the cool pix of our Dino and Miss Shirley on the cover...truly worth the price of this classic al-b-um.

ilovedinomartin salutes our pallie Mr. Joe Marchese and the folks at "The Second Disc" for puttin' us all on to this fabulous Dino-treasure. To view this in it's original format, likes just clicks on the tag of this here Dino-gram. Dino-pysched, DMP

It’s “All in a Night’s Work” For Dino, Shirley and André Previn 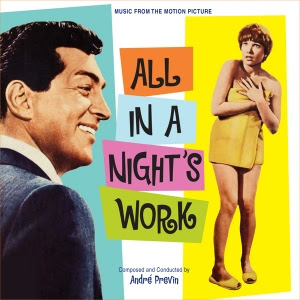 Scoring a major motion picture…writing a Broadway musical…recording a jazz piano album…conducting a classical symphony. Any of the above might be all in a night’s work for André Previn, a four-time Academy Award winner and ten-time Grammy recipient. And now Previn’s score for the 1962 film All in a Night’s Work is getting its first-ever soundtrack release courtesy of the Kritzerland label!

The Dean Martin/Shirley MacLaine comedy followed Previn’s triumphant, Oscar-nominated score for 1960’s Elmer Gantry (also reissued on Kritzerland) but the frothy romance was, naturally, quite a different assignment! Martin and MacLaine had appeared together in Vincente Minnelli’s Some Came Running (1958) and also in director Joseph Anthony’s Career (1959). Anthony was back behind the camera for All in a Night’s Work, with the screenplay provided by Sidney Sheldon (I Dream of Jeannie), Maurice Richlin (Pillow Talk, The Pink Panther) and Edmund Beloin (The Sad Sack). Paramount called on an array of notables for the supporting cast, as well, including Cliff Robertson, Jack Weston, Charlie Ruggles, Norma Crane, and Lucille Ball’s perennial foil, Gale Gordon.

According to reissue producer Bruce Kimmel’s notes, “The plot kicks off in high style when a mysterious woman is seen running from a ritzy Palm Beach hotel room, wearing only a bath towel and not a very large one at that. Since the hotel room’s guest, a New York publishing baron, is found dead in bed, the question is: who was that lady and was that lady his mistress? Complications, misunderstandings, mink coats, fancy nightclubs, and, of course, love and a happy ending, and all in glorious Technicolor, set to the romantic, propulsive, and phenomenal music of André Previn.”

Previn was already well-known around Hollywood. In 1939, his family moved from Germany to California, where his great-uncle Charles Previn was already ensconced as music director at Universal Studios. The young, budding musician attended Beverly Hills High School with another future Oscar winning composer, Richard M. Sherman, with both men graduating in 1946. Within just a few years, Previn was working regularly as a jazz pianist while composing and arranging for the dream factory at Metro-Goldwyn-Mayer and elsewhere. Hollywood would keep him gainfully employed, netting him both Oscars and accolades; he wrote such famous songs as “You’re Gonna Hear from Me” and “(Theme From) Valley of the Dolls” for motion pictures. But Previn had his sights set on a broader canvas and retired from Hollywood by the mid-1970s. He had already branched out to Broadway and London with the stage musicals Coco and The Good Companions, respectively, and took on prestigious assignments conducting The Houston Symphony Orchestra and the London Symphony Orchestra just to name two of his accomplishments as music director. He also began to compose operas and orchestral works, and was recognized by the Kennedy Center Honors in 1998 for his contributions to classical music and opera.

Kimmel describes Previn’s main title as setting the tone for the film: “an upbeat, dynamic, and colorful showpiece for orchestra. That theme recurs again, but it’s the delicious and beautiful love theme that gets most of the attention, in a large number of guises – it’s instantly memorable and works wonderfully throughout the film – as underscore for romance, shopping, cocktails, dinner and dancing, and yes, more romancing, the kind of romance that only happens in the movies with beautiful music underscoring everything. There are other equally excellent themes, and the score is just a constant delight of melody and inspiration.”

For its first-time soundtrack release, All in a Night’s Work was transferred from the original session masters housed in the Paramount Pictures vaults. The tapes were in excellent condition and in stereo save for two cues that only existed in mono. The first of those is presented in film sequence (Track Two), and the last, the complete finale, is presented as a bonus track; the finale in the main stereo program is a shorter version. All told, you’ll find five alternate bonus tracks!

All in a Night’s Work is a limited edition of 1,000 copies and is due to ship the last week of July. However, pre-orders from Kritzerland usually arrive an average of four weeks early! It’s available for pre-order directly from the label at the link below for $19.98 plus shipping.