Dean alone is worth the viewing

Hey pallies, likes as promised we return 'gain this very Dino-day to our lovin' Deanager, Miss R.C.'s blog, "The Shades Of Black And White," for her wonderful words of wisdom on that classic Dino-musicale, "Bells Are Ringing." This amazin' youthful Dino-devotee 'gain captures in words, pixs, and vids the pure delight of our most beloved Dino starrin' with the sensational Miss Judy Holliday in this big screen musical romp.

It is obvious that R.C. and I are of like minds when it comes to "Bells." We loves our Dino...and we loves Miss Judy as well. Couldn't agree more with R.C. when she pontificates...."It's fun; it's hilarious; the music is beautiful.." And, I could go on and on, but I wants you to read this Dino-philes review for yourselves dudes!

Again, ilovedinomartin thanks Miss R.C. for her amazin' passion for our Dino and for her unabashed way of lettin' her readership know of her affection for our most wonderful man. To read Miss R.C. thoughts in their orginal form, as usual, just clicks on the tag of this Dino-message. And stay tuned right here 'cause I'm sure we'll be sharin' more of this Dino-lass's Dino-reflections real real soon! Keeps lovin' our Dino! Dino-always, ever, and only, DMP 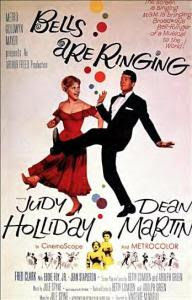 TCMDb: An answering service operator gets mixed up in her clients' lives.

If I were asked to name my favorite musical, it'd be, without one single doubt, Bells Are Ringing with Dean Martin and Judy Holliday. This is just one of the best musicals ever made, in my opinion. It's fun; it's hilarious; the music is beautiful (minus the terrible "Midas Touch",b but that was meant to be bad) and/or worthy of a good sing-along (no one can tell me they don't sing along sometimes with these musicals).
Known for very colorful and bold musicals, director Vincente Minnelli does not fail here either. Bells Are Ringing is not only pleasing to the ears, but also to the eyes. The colors are bold, and they call out to you, but they are not so bold that they become obnoxious within the first ten minutes of viewing time. Instead, they keep you awake and thinking, "Ooh, what pretty colors."
Maybe, as some critics would say, it does have a weak or rather silly plot, but I could careless what the critics think because I'm not one . . . or rather I'm not a professional critics, and as I've continue to discover, the critics aren't always right. What they pan as a terrible movie, turns out pretty gosh darn well, and then sometimes the ones they are absolutely head-over-heels for turns out to be pretty bad to me. Despite the fact that they think the plot is weak, they still think that Bells Are Ringing is a pretty good picture, Leonard Maltin giving it a 3/4 stars (I knew there was a reason why I liked him . . .). 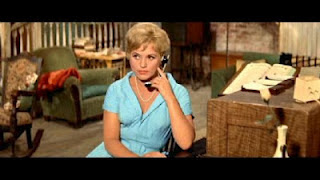 Basically, the whole premise of the film is that Ella Peterson, played by the lovely Judy Holliday, works at her cousin, Sue's, phone operating business, and though she's not suppose to, she does more than just give and take messages for the customers. She gets to know them, and does personal favors for them such as pretending to be Santa Claus for one mother who has a hard time getting her son Timmy (who sounds a lot like a little girl) to eat his spinach. Or, in the case of Madame Grimaldi, gives her a mustard recipe to help with her laryngitis, which happens to be so pure if she has any leftovers, she can put it on a hot dog (Mme. Grimaldi is so thankful she sends Ella a dress from La Traviata). 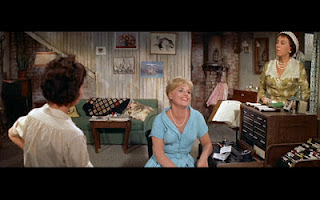 It's all harmless. The customers like Ella, and Ella likes the customers . . . and in one special case, she's in love with one customer by the name of Jeffery Moss, a playboy playwright who's having a serious case of writer's block. He's afraid to try and do anything because he feels that he's sure to fail because his partner has left him . . . (Does anyone beside me see the connection? Even the first time I saw this, I caught the similarities between Jeffery Moss and Dean . . . I can't see how anybody can possibly miss it.) Jeffery doesn't think he can make it by himself, and no one really understands his problem . . . all except Ella.

Ella understands Jeffery. She understands that he's afraid to do anything because's afraid he'll fail. She's so understanding of him that she's fallen in love with him. It doesn't matter that she's never set eyes on him; she doesn't care if "he's six foot seven or three foot two, with eyes of brown or baby blue, big and mighty or underfed"--she just doesn't care because she's in love "with a man--Plaza Oh--Double Four--Double Three." It's a perfect relationship because "I can't see him--and he can't see me!" She's even gone so far as to help him that she's created this character of a sixty-three-year old woman who listens to Jeffery when he needs to "chew the old fataroo" or "blow the breeze" to good ol' "Mom".

If pretending that you are a sixty-three-year-old woman who lets a man that she knows nothing about other then the fact that he's a playwright who's afraid that his partner was the one with all the talent and that he's going to fail call her Mom, I don't know what is.
Oh, wait, yes, I do! Love is also going to his apartment to wake him up after a night of drinking to get down some words on a play that he's promised to his agent so that the said agent doesn't drop him like a hot potato and move on somewhere else, getting caught by sleeping man that she's in love when she's trying to get back out of his apartment, and then say that her name is Melisande Scott.
Ella/Melisande/Mom's support and belief in Jeffery gets him to writing again, and by the end of the day he's gotten an outline for a play, and his agent, Larry Hastings, played by Fred Clark, is happy with him. And though Melisande confuses him, you can tell that Jeffery is already falling in love with her. He asks her out on a date when he returns from the country so he can finish his play, and though she initially refuses, she finally agrees when he says that he won't go to the country unless she says yes. 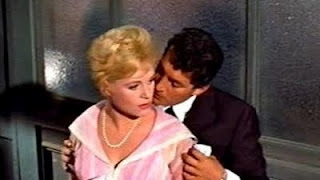 Since we know that the film couldn't continue on with her still refusing that date, we all know that she says yes. And through the course of the rest of the film, she gets into a little trouble with a couple of inspectors who thinks that Susanswersphones is a facade for something illegal (well, really only one does, the other is just a big lug of a guy who knows that Ella is really just an extremely nice person) . . . ironically, though Inspector Barnes is wrong in the beginning, Cousin Sue's beau, J. Otto Pranz, has convinced her to let him use her place of business as his place of business . . . his business just happens to be illegal gambling covered up as a classic music (classic as in Bach and Beethoven) records shipping store. If you're not careful, you can get slightly lost the fist time you view this picture because there's so many wild and crazy going ons, but hey, if that happens, that'll just give you an excuse to watch it over again. 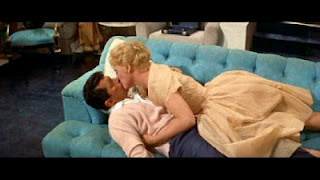 There's a lot of mixing and mashing of things that wouldn't normally go together, such as a dentist who really wants to write music, and composes his pieces on an air hose (much to the chagrin of his clients), an actor with a Marlon Brando complex (played by the hilarious Frank Gorshin), and a woman with a terribly high pitched voice that I'm sure would make dogs whimper who's after Jeffery, plus all the other forementioned characters. Yet somehow, curiously, it does go. It goes to the brilliant direction of Minelli, the superb acting and singing of both Dean and Judy (who really wasn't a singer, so when she does sing, it's impressive) and everybody else.
Bells Are Ringing is in short, a fantastic musical; a very underrated work of Vincente Minelli. It was Dean's first musical after his breakup with Jerry (he'd go one to do only one more musical Robin and the 7 Hoods). Sadly, this was Judy's last picture . . . she died about four years later of breast cancer. The fact that the she originated the role on Broadway (Betty Comden and Adolph Green, the authors, wrote it for Judy) and was able to play the character on screen was, in a way, a beautiful send off, albeit, a sad one.
If you haven't seen Bells Are Ringing, I highly suggest you that you do (Dean alone is worth the viewing, but of course he's not the only reason why I'm telling you that you should watch it). I give this picture a 4/4 stars.
Now I leave you with my two favorite songs from the picture:

I don't know why I love this song as much as I do,
I just do.
Video courtesy of http://www.youtube.com

I just love this song. And the way Dean says, "Don't
you like dancing?" makes my toes curl.
Video Courtesy of http://www.youtube.com
Posted by dino martin peters at 7:06 AM