Hey pallies, the web is likes just chocked full of Dino-treasures to be discovered. Yesterday it was dem cool Dino-T's and likes today it's a feature from the blog "Daisy's Doll House" that features one of dem ultra ultra cool singin' Dino-dollie's.

Likes how cool is it dudes to have Miss Daisy who obviously is head-over-heels devoted to her doll collection share this Dino-devotion at her blog. As you will read the Dino-treasure belongs to her sis. Likes for such a long long Dino-time I have been desirin' my very very own Dino-singin' Dino-doll.

Hats off to Miss Daisy for sharin' this very delightful Dino-creation with all her readers. To view this in it's original format, likes just clicks on the tag of this Dino-report. In our Dino, DMP 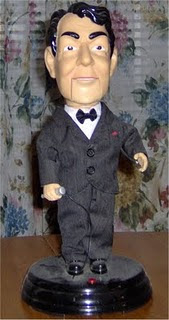 This is a singing Dean Martin doll by Gemmy Industries. The doll looks a lot like the real Martin except that it is made out of plastic and its head is oversized. The red handkerchief that peeks over the edge of Martin’s breast pocket is a nice touch.

The doll has a repertoire of only two songs, “Everybody Loves Somebody,” (1963), that knocked the Beatles out of the popular chart’s number one position, and “That’s Amor” (1953).

He is from my sister's collection, and he is standing in her dust collection..lol.. ;-)
Posted by dino martin peters at 7:31 AM