Hey pallies, likes I am always in awe of artistes who are able to use their artistic talents to show their devotion to our Dino. From the self-tagged blog, "Greg Joens Sketch Of The Day" comes a fantastic renderin' of our beloved Dino.

It's clear that Mr. Joens is a very talented portrait artiste as his Dino-image is likes first first rate....a wonderful trib to our Mr. Wonderful. Likes to me it is absolutely amazin' what a guy like Mr. Greg Joens can create with a mere pencil and sketch pad....Dino-riffic for Dino-sure!

ilovedinomartin sends mucho Dino-appreciato to Mr. Greg Joens for showin' such Dino-devotion thorugh his pen and paper! The amazin' piece of Dino-art is sure to draw many to a deeper devotion to our beloved Dino. To view this in it's original format, just clicks on the tag of this Dino-prose. Dino-delightedly, DMP

Greg Joens Sketch Of The Day 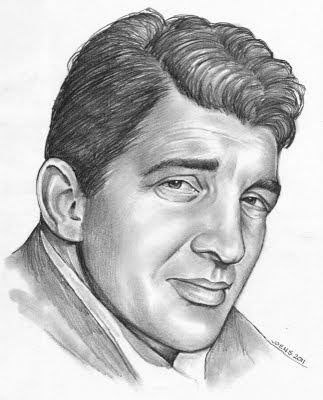 Dean Martin (June 7, 1917 – December 25, 1995), born Dino Paul Crocetti, was an American singer, film actor, television star and comedian. Martin's hit singles included "Memories Are Made of This", "That's Amore", "Everybody Loves Somebody", "Mambo Italiano", "Sway", "Volare" and smash hit "Ain't That a Kick in the Head?". Nicknamed the "King of Cool",[1][2] he was one of the members of the "Rat Pack" and a major star in four areas of show business: concert stage/night clubs, recordings, motion pictures, and television. Source: Wikipedia
Posted by dino martin peters at 8:01 AM

Sketch of the Day said...

Thanks so much for the kind comments regarding the rendering of Dean Martin. He certainly was a one-of-a-kind entertainer. Sincerely, Greg Joens

Hey pallie, Mr. Joens you are most welcome sir...always loves to share the hugely unique ways that pallies likes you have of sharin' your Dino-devotion! Keeps lovin' our Dino!

A sketch worthy of framing!

Hey pallie, likes Miss AOW that is so so Dino-true...wishes that I had such talent to be able to homage our beloved Dino in that way....keeps lovin' our Dino!