When the moon hits your eye...

Hey pallies, likes this is such a cool cool Dinofind....here's a wonderful guy tagged Ralph who's daddy-o gots to hang with our Dino and the kid....read all 'bout it below...and if likes you wanna reads this in the original Dinoformat, likes as usual, just clicks on the tagg of this Dinopost. In the Dinopatter I left for Mr. Ralph, likes I said likes what woulda I give to say that my old man hung with our Dino!!!! Dinopsyched, DMP 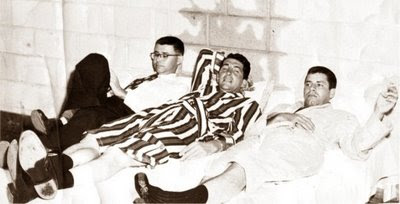 I have only slight memories of many things when I was young, so the past comes alive on film. The picture I have here is one I remember quite well since a kid - it was framed on a wall of our living room (42nd Ave, Bayside Queens) and family room in (East Hartford). It is my father (Ralph II) lounging alongside Dean martin and Jerry Lewis. I would guess about 1954, and in Atlantic City where my father was a reporter for the AC Press. Obviously it was staged, but the lowly reporter did have an audience with the hottest team in entertainment before their breakup in 1956. A unique photo this is. As the picture has aged, I sharpened added the sepia tone which adds to its aged authenticity. A view at a different era.
Posted by Ralph at 11:50 PM
Posted by dino martin peters at 2:33 PM

Hey pallie DMP. Wow! That's so cool. I would love it if my family had a pic of like my granddad with Dino and Jerry. Cheers!

Hey pallie Keith, likes just to have known someone who had spent time with our Dino woulda be just likes the total Dinocoolest...woulda been askin' over and over for my daddy-o or whoever to retells the Dinotale for Dinosure......